Trashing Keynes for Being Gay is Nothing New 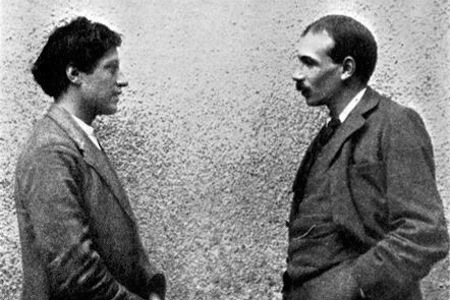 Harvard economic historian Niall Ferguson told a group of financiers and investors last Saturday that John Maynard Keynes was a flawed economist who didn't care about future generations because he was childless and gay.

Tom Kostigen, a reporter for Financial Advisor magazine, first reported on the story:

Ferguson asked the audience [at the Tenth Annual Altegris Conference in Carlsbad, Calif.] how many children Keynes had. He explained that Keynes had none because he was a homosexual and was married to a ballerina, with whom he likely talked of "poetry" rather than procreated. The audience went quiet at the remark. Some attendees later said they found the remarks offensive.

Ferguson, who is the Laurence A. Tisch Professor of History at Harvard University, and author of The Great Degeneration: How Institutions Decay and Economies Die, says it's only logical that Keynes would take this selfish worldview because he was an "effete" member of society.

Ferguson later apologized for his remarks, saying “My disagreements with Keynes’s economic philosophy have never had anything to do with his sexual orientation,” but colleagues of Ferguson have said they've heard similar remarks from him over twenty years ago, and in his 1999 book The Pity of War, Ferguson snidely commented that “[World War I] made Keynes deeply unhappy. Even his sex life went into a decline, perhaps because the boys he liked to pick up in London all joined up.”

The outcry over Ferguson's remarks misses a larger point: conservatives and evangelical Christians have been saying stuff like this about Keynes for years. Lewis Lehrman, the investment banker-turned-historical philanthropist, said of Keynes: “I have five children. I have a vision of the future. Keynes had no children and no interest in getting involved in any relationship which might make possible their procreation. He was inherently short-run in his viewpoint.” (The quote comes from a 1986 book by Ian Hodge entitled Baptized Inflation: A Critique of "Christian" Keynesianism, published by the Institute for Christian Economics.)

Christian writers and economists, in particular, have focused on Keynes's sexuality and his affiliation with the “Bloomsbury Group,” an informal social circle drawn from the “Cambridge Apostles” student society before World War I who rejected Victorian social mores. Prominent members included Keynes, E.M Forster, Leonard and Virginia Woolf, Lytton Strachey, and G.E. Moore. Most were gay or bisexual, and – like the American writers in 1920s Paris who formed the “Lost Generation – there were plenty of liasons, menage a trois, and extramarital affairs to go around.

The bohemianism of the Bloomsbury Group draws particular ire from the religious right. Jerry Bowyer, a conservative economics writer, had this to say about Keynes in a 2011 Forbes column:

He and his fellow members of the Cambridge Apostles were firmly committed to an agenda of overthrowing every element of the Victorian society from which they had sprung. The rejection of thrift, or of any economic principles at all were of a piece with the rejection of any system of objective truth, any objective moral code, any form of theism and old-fashioned notions about standing up to the Germans, whether under the Kaiser or later under the Führer. In other words, the whole societal order was to be overturned.

G.E. Moore attacked traditional philosophy and theology, Lyton Strachey’s job was to use literature to debunk Victorian principles of self-restraint, and Keynes was to demolish classical economics, sound money and the virtue of thrift. The sex was only a part of it, and probably a subordinate part of it as well.

The apostles were committed to an ideology of the superiority of male intimacy over male/female intimacy not because they were born gay (many of them lapsed into heterosexuality once they were away from the club, some members having feigned homosexuality in order to be included in the group,) but because they saw all of Victorian society, which they hated, as a coherent whole.”

Has Ferguson been influenced by these arguments? Who knows. There are certainly plenty of economic and political arguments to be made against Keynesianism. But the fact remains that Keynes's sexuality has long been used by religious conservatives as a moral argument against both the man and his theories, and Ferguson's comments have been the latest (and seemingly most public) iteration.

Update: Economist Brad DeLong has unearthed a similar quote from historian Getrude Himmelfarb over at his blog:

There is a discernible affinity between the Bloomsbury ethos, which put a premium on immediate and present satisfactions, and Keynesian economics, which is based entirely on the short run and precludes any long-term judgments. (Keynes's famous remark. "In the long run we are all dead," also has an obvious connection with his homosexuality - what Schumpeter delicately referred to as his "childless vision.")