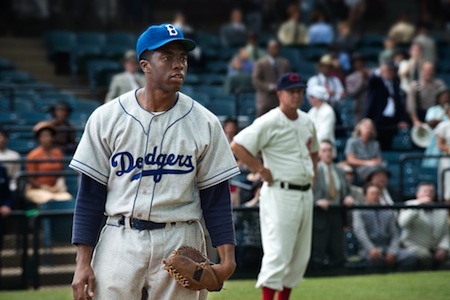 Baseball films rarely generate good box office for Hollywood; however, the release of 42, focusing upon Jackie Robinson’s shattering of Major League Baseball’s (MLB) color line in 1947, is a pleasant surprise. The film has generally earned good reviews, and during the first weekend of its release 42 was the top domestic grossing film -- though with its baseball theme, 42 will have limited international appeal. In addition, 42 is certainly an improvement over the low-budget Jackie Robinson Story (1950) in which Robinson portrayed himself, and the racial pioneer’s story was reduced to a Cold War parable which concluded with Robinson giving testimony before the House Un-American Activities Committee on to the loyalty of black Americans. Essentially, 42 is a heroic tale of a courageous individual challenging segregation and a nation willing to confront its Jim Crow past and traditions. Unfortunately, the story of Robinson and baseball integration is not quite as simple as 42 would have us believe.

At the heart of 42 lie three major heroes -- Robinson (Chadwick Boseman); Branch Rickey (Harrison Ford), the Brooklyn Dodgers executive who signed Robinson; and Wendell Smith (Andre Holland), a sportswriter for the black Pittsburgh Courier who serves as Robinson’s liaison with both Rickey and the black community. In fact, 42 deserves considerable credit for featuring the role of the black press in confronting baseball’s color line; a topic which is often ignored in popular accounts of the Robinson story. Most film audiences, however, are also certainly unaware that communists, especially sportswriter Lester Rodney of the Daily Worker, played a prominent role in the struggle for baseball’s desegregation. While it may be asking too much for the communist role to be acknowledged, the inclusion of Smith as an influential member of the black press is commendable.

Much of the film concentrates upon explaining the motives of Branch Rickey, a devout Christian and staunch anti-communist Republican, for breaking with his fellow owners in signing a black ballplayer. Initially, Rickey, played by an almost unrecognizable Harrison Ford, asserts that his primary motivation was color -- the green color of money which does not discriminate between white and black spectators. In other words, the signing of black players would attract black fans and their dollars. And money was certainly important to Rickey who enjoyed a miserly reputation in his salary negotiations with players. Near the end of the film, however, Rickey provides a more humanitarian motive with the story of Charles Thomas. When Rickey was a baseball coach for Ohio Wesleyan in 1903, his black catcher and first baseman was denied permission to stay in an Indiana hotel. Rickey prevailed upon the hotel management to have Thomas sleep on a cot in his room. A distraught Thomas, according to Rickey, then sat in the room attempting to wipe away his black skin. Rickey promised himself and Thomas that if an opportunity presented itself to do something about segregation in baseball and American life, he would avail himself of that opportunity. Post-World War II working-class Brooklyn seemed the right time and place.

Although outside the scope of 42, Rickey continued to bring black ballplayers to Brooklyn. In 1955, Robinson, joined by Roy Campanella and Don Newcombe, led the Dodgers to a World Series victory over their nemesis the New York Yankees. Rickey’s Dodgers were attracting more black fans and dollars, but Rickey’s rival Walter O’Malley believed that even greater profits could be generated in the El Dorado of California. O’Malley maneuvered to oust Rickey from the Dodger ownership, and following the 1957 season the Dodgers deserted Brooklyn for Los Angeles. Brooklyn had supported the desegregation of baseball in 1947, but a decade later they had lost their beloved Dodgers. As for Rickey, he resurfaced in management with the lowly Pittsburgh Pirates. Thus, reality conflicts with a running joke through 42, in which Dodger players, such as Dixie Walker (Ryan Merriman) and Kirby Higbe (Brad Beyer), who opposed Robinson’s signing were traded to Pittsburgh, a franchise which continues to struggle today. But what the film does not reveal is that Pittsburgh was also Rickey’s destination.

Of course, the central heroic figure in 42 is Robinson, and the film tells the story of Jackie’s 1947 campaign in which he led the Dodgers to a National League pennant, while earning selection as Rookie of the Year. When Rickey signs Robinson in 1945, the Brooklyn executive chooses Robinson over other Negro League players because he had college experience; running track and playing baseball, football, and basketball at UCLA. Robinson also had military experience, although he challenged the Army’s segregationist policies. Robinson also had the support of a loyal girlfriend who would soon become his wife, Rachel Isum Robinson (Nicole Beharie). Rickey makes it clear that he selected Robinson because of his belief that the athlete had the courage not to fight back when confronted with racist taunts and baseballs thrown at his head in an era before batters wore protective helmets.

Robinson and his new bride faced considerable discrimination in 1946 when he reported to spring training in Florida. To ease the transition for Robinson and his teammates, Robinson spent the 1946 season with the Montreal Royals and was selected the Most Valuable Player in the International League.

42 primarily chronicles a series of events that made 1947 the year when all hell broke loose in baseball, according to Dodger broadcaster and native Southerner Red Barber. Robinson’s promotion to the Dodgers is met with a petition circulated by players such as Dixie Walker, who was a Brooklyn favorite, and Kirby Higbe from the South. Manager Leo Durocher (Christopher Meloni) squashed this revolt by asserting that the club would be willing to trade any player who refused to play with Robinson. A combative Durocher proclaims that the Dodgers will add other black players, not as a social mission but in order to win baseball games. Although Durocher championed Robinson, he was suspended by Baseball Commissioner Happy Chandler for his alleged involvement with actress Laraine Day before her divorce was finalized. The film omits that Durocher was also suspended due to his alleged association with gamblers. And the role of Chandler -- the replacement for the racist Kenesaw Mountain Landis, who died in 1944 -- in promoting the integration of baseball is also ignored by the film. Durocher was replaced by former Dodger manager Burt Shotton (Max Gail), who advocated for Robinson in his own gentle manner.

One of the pivotal moments in the film is the vehement racial slurs hurled at Robinson by Philadelphia Phillies manager Ben Chapman (Alan Tudyk). The Phillies manager was so vitriolic that combative Dodger second baseman Eddie Stanky (Jesse Luken) told Chapman to pick on someone who could fight back. When Robinson asked Stanky why he confronted Chapman, the response was simply because he was attacking my teammate. Robinson was also embraced by the Dodgers popular shortstop Pee Wee Reese (Lucas Black). During a game in Cincinnati, Reese, who was a Southerner from nearby Kentucky, made a public gesture of putting his arm around Robinson, silencing many Robinson detractors in the hostile crowd. Robinson became fully aware of his acceptance by teammates when he is beaned. After regaining consciousness, Robinson is able to see his Dodger teammates engaged in battle with the Pirates and pitcher Fritz Ostermueller. Robinson gains his revenge on the field when his home run against Ostermueller clinched the pennant for the Dodgers. A slow motion turn around the bases symbolizes the triumph of Robinson and racial progress over the reactionary elements of Jim Crow. And young black men, such as Ed Charles (Dusan Brown) who later played third base for the 1969 World Champion New York Mets, could now dare to fulfill their drams. A bit corny on film, this heroic portrait of Robinson is certainly an important part of the Dodger great’s legacy.

Yet, reality is bit more complicated. The struggle against racism took its toll upon Robinson. Earning selection to the Baseball Hall of Fame in 1962 for both his on the field play and courageous breaking of the sport’s color line, Robinson’s health was poor following his retirement in 1956. Robinson also suffered through the agonies of his son Jackie Robinson, Jr. who returned from the Vietnam War with a drug problem. After seeming to deal with his addiction, Jackie, Jr. (whose birth is featured in 42) died in a 1971 car accident. When he died from a heart attack on October 24,1972, Jackie Robinson was only fifty-three years old, but he was nearly blind and suffered from hypertension and diabetes. One can only surmise how the strain of the 1947 season helped to make Robinson prematurely age. But director Brian Helgeland, perhaps best known for his screenwriting credits on such films as L.A. Confidential and Mystic River, does attempt to convey this stress in a powerful scene which is not based upon any observed historical account. Angered and frustrated by Chapman’s race baiting, Robinson retreats toward the clubhouse, where he proceeds to break down emotionally, shattering his bat and sobbing uncontrollably. While not based upon fact, this scene does convey what being baseball’s racial pioneer cost Robinson.

It also cost other black baseball players who never made to the Major Leagues. For example, there is a scene in 42 where Rickey has candidates from the Negro Leagues listed on a blackboard. The name Satchel Paige is circled. Based upon his barnstorming performances against such famous Major Leagues pitchers as Dizzy Dean and Bob Feller, many baseball experts consider Paige to be the greatest pitcher in the history of the sport. Yet because of his black skin, Paige was unable to pitch in the Major Leagues until the summer of 1948, when he was signed by Bill Veeck and the Cleveland Indians. Paige was a MLB rookie at age forty-two. But at least Paige got to play briefly on the MLB stage. This opportunity was denied to Josh Gibson, known as the black Babe Ruth.

Integration, however, proved to be a double-edged sword for black baseball. As players such as Robinson entered MLB, interest in the Negro Leagues declined. Once a major business and employer in the black community, the Negro Leagues were destroyed by the integration of many major stars into MLB. And Branch Rickey refused to honor Negro League contracts and declined to compensate the Kansas City Monarchs for Robinson’s services. A better model for baseball integration might have been the incorporation of entire Negro League franchises into MLB or the high minor leagues. The individualistic approach benefitted some black players and white owners at the expense of the larger black community. And the pace of integration in MLB remained slow despite the self-congratulatory rhetoric of the sport’s leadership. For example, when Robinson retired in 1956, the Boston Red Sox and Detroit Tigers had yet to feature a black player at the Major League level.

In addition, after reaching a record percentage of approximately 18 percent black players in MLB during the 1970s, that percentage has fallen to 8.5 percent in a sport which includes numerous international players from Asia and Latin America. With approximately 65 percent of the National Football League and 78 percent of the National Basketball Association black, baseball seems increasingly out of sync with black Americans despite the great personal sacrifice of Jackie Robinson. Meanwhile, the economic disparity between white and blacks in America continues to grow.

42 is a film honoring the heroic legacy of Jackie Robinson, and every spring on April 15 all Major League players wear number 42 in tribute to Robinson. Nevertheless, the historical reality of baseball integration and race relations in America are a far more complex and challenging problem.