Tough Times to Be Lobbying for History on Capitol Hill 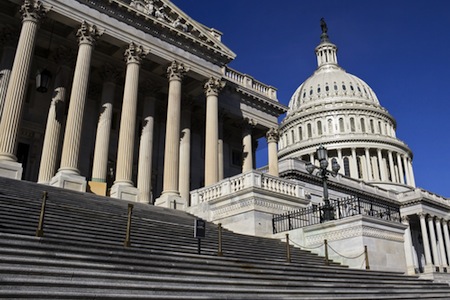 Lee White, executive director of the National Coalition for History, was unequivocal in his presentation Saturday at the Organization of American Historians annual meeting in San Francisco: history is in trouble on Capitol Hill.

White has been the head of the NCH, the face of history in Washington, D.C. officialdom as the only dedicated advocacy for history and historical research, since 2007. With a law degree from the Catholic University of America, a master’s in history from George Mason University, and over twenty years of experience as a lobbyist, he’s no stranger to the machinations of Washington politics.

Even so, it’s not an easy job in today’s age of austerity to ask for funding for historical projects. One Democratic congressman told him bluntly, “You’re wasting your time.”

But the effects of budget cuts are not inconsequential, and not just to researchers and educators reliant on federal matching grants. The various Smithsonian museums and the National Archives in the nation’s capital normally extend visiting hours during D.C.’s cherry blossom festival to accommodate the height of tourist season.

This year, thanks to the sequester, the museums on the National Mall closed promptly at five o’clock, sparking angry phone calls from constituents.

Even White’s panel at the OAH meeting felt the pain. A number of speakers from the National Parks Service were planned, but due to a freeze on federal employee travel, none were able to attend. House and Senate historians Matthew Wasniewski and Don Ritchie were both at the conference (though not at White’s panel), but came on their own dime.

The outlook for additional federal funding for history looks grim. President Barack Obama’s budget would restore funding for many – but not all – arts and humanities programs hit hard by sequestration. The National Endowment for the Humanities would get roughly $154.5 million, nearly 6 percent more than the pre-sequestration budget, but the Institute of Museum and Library Services, which among other programs provides grants for museums and archives across the country, gets a roughly $5 million bump under the Obama budget, but that would still put the organization around $7 million short of its pre-sequestration budget.

Tighter still is the budget for the National Historical Publications and Records Commission, targeted for elimination by Representative Jason Chaffetz (R-UT) in a 2011 bill. The NHPRC would receive only $3 million under President Obama’s budget – the same funding, in real dollars, it had in 1980.

History is far from the only academic discipline to feel the squeeze. Senator Tom Coburn (R-OK) sponsored an amendment to a Senate bill limiting National Science Foundation funding for political science projects to those certified as “promoting national security or the economic interests of the United States.” Increasing funding for practically any program not directly related to science and technology is out of the question for many in Congress. One congressional staffer, though his boss is an admitted history enthusiast, told White he’d be “crucified” if he increased funding for historical research.

Though the money might not be forthcoming, White spoke of taking a “flanking” approach to the obstacles on Capitol Hill. Building on the very real interest in history that many serving in Congress or working on congressional staffs have, White plans to organize a congressional history caucus, where he would serve as an advisor, and is sounding out interest in informal history groups on Capitol Hill. “Maybe even something as simple as a book club,” he said – anything to get people talking about history in the halls of power.

White will also continue to partner with other humanities advocacy groups to amplify the voice of history and the humanities inside the Beltway.

The biggest victory for history lobbyists in the last year was not, ironically, in Washington, but in Atlanta, where local and national groups successfully pressured the governor’s office from shutting down the Georgia State Archives. Fighting for history “will not be an easy fight, nor one we can win in every instance,” White concluded, “but we will continue to fight.”