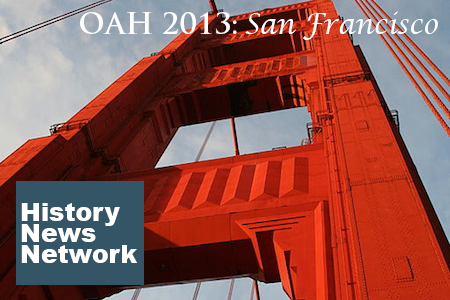 Trains, planes, and automobiles are going to be packed with historians over the next two weeks – the Organization of American Historians kicks off its 2013 Annual Meeting in San Francisco this Thursday, April 11, and the National Council on Public History opens its conference in Ottawa next Wednesday, April 17.

As always – even with the slow-motion jobs crisis in history and the humanities in general – young men and women crazy enough to pursue (or dream of pursuing) advanced degrees in history will flock to the conferences for the first time, with starry-eyed hopes of meeting the rock stars in their fields, making connections (hopefully of a non-scandalous nature), presenting their first paper in front of an academic audience, or maybe even closing the deal on that juicy tenure-track position (after all, the phone interview went really well!).

So, what’s a first-timer to do at the OAH annual meeting? (Sorry, NCPH – I’d go if I could, but we’ve only got the budget to send a reporter to one springtime conference. A lot of this will be relevant for both conferences, and anyway Milwaukee was fun last year, right?) Here’s a survival guide for undergraduates and grad students entering the murky waters of the historical conference:

Download the official app. Yes, even historians are getting into mobile apps (it’s a work in progress here at HNN – but if you’d open your hearts, and more importantly your wallets, we’ll get in on the act, too). The OAH official meeting app is available to all registered attendees, and features an interactive personalized schedule, announcements, full session information, feedback options, and a guide to San Francisco.

Follow #oah2013, #twitterstorians, and @myHNN on Twitter. Yes, yes, 140 characters may not seem to be the best way to have a substantive historical conversation, but by following these hashtags (and the official HNN Twitter feed), you’ll be conversing with dozens of historians across disciplinary boundaries – and everyone will be talking about the sessions they’re attending. It’s a great way to stay updated on what’s going on in the other rooms. And who knows, you may even make a friend online and then get to meet them in person in a totally non-creepy way!

Go to at least one evening reception. Free food, free booze, great conversation, and the potential to make new friends and connections (and for the more amorous, one of the few instances where your research could very well work as a pickup line).

Relax. Yes, presenting a paper or scoring a job interview is a BIG DEAL, but take a few deep breaths and try to relax. Both yourself and your work will be under microscopes, but there really aren’t that many outright malicious historians at these conferences.

For job seekers, be positive and think outside the box. Yes, the job market is terrible, but things could be a lot worse. For one, It’s not 1970 (thank God), and you’re not going to be forced to pick sides on Vietnam during the job interview for be blackmailed for sex as a condition for a job (yes, this stuff happened – two guesses on the gender of the blackmailers).

The OAH is also working for you, not against you – why not stop by Kate Duttro’s booth in the convention hall? She’s a career coach who will be on hand throughout the convention to provide one-on-one help to jobseekers.

And remember, the academy is not the end-all, be-all of jobs even within the field of history. Beyond Academe is a wonderful resource when considering employment outside of the academy, and the site’s run by a historian to boot!

If you land that tenure-track job, great, good for you! If you don’t, there are other options. It is not a mark of failure to work outside of the academy, no matter what your grey-haired advisors or neurotic grad school friends think.

Don’t just seek out rock stars. Expand your network! Especially for first-timers, it can be tempting to only seek out the famous names in your field. Don’t fall into that trap – talk to everybody. Try to make at least one connection with someone who’s doing something completely unrelated to your research – you never know if they’ll be in a position to put in a good word for you later down the road.

Talk to the university presses! In many ways, it’s these people, not your advisors or mentors, who you really need to impress, since it’s going to be their acquisitions editors who ultimately decide to publish your manuscript. There’s no better way to understand where they’re coming from than to talk to them.

For Undergraduates and High School Students

Set your expectations accordingly. You know how sometimes you get the feeling that your professors don’t really care about you, and don’t really enjoy teaching undergrad classes? Well, you’re going to feel that way at OAH (and for those small liberal-arts college students, you’ll understand what the rest of us are talking about).

It’s not that tenured historians don’t care about teaching young minds the majesty of, say, Reconstruction in an intro to American history class or enjoy chatting about Abraham Lincoln; it’s just that presenters at the OAH are presenting to their peers, not to students. EVERYONE on a panel will either have a PhD or be studying to earn one, and so will most people in the audience.  That smug, annoying person who will take two minutes to ask a question he or she already knows the answer to during the Q & A? They’re not doing that to show off to the panel in order to seem smart. they’re doing it because they really are that smart -- and probably a bit egotistical, too. These conference-goers will be friendly and courteous, but they’re not going to treat you as a colleague.

So, set your expectations accordingly. If you want to listen to some incredibly brilliant people talk enthusiastically about their work, you’re going to the right place. If you want to get a feel for what the workaday life of an historian is, you’ve come to the right place. But if you think that just because you had a brief conversation with Eric Foner, you’re going to get into Columbia, think again.

But… don’t be afraid to ask questions! Humanities conferences are actually rather small, intimate affairs – certainly much more so than a political convention or even a political science convention. There will only be a handful of sessions with more than twenty people in the audience (be warned, this can come as a bit of a disappointment to the aspiring young scholar who is extremely excited about his or her field, only to find all of three people interested in it, too) so by participating in the discussion, you’re not only making the most of your time at the conference, but the panelists, too.

Talk to graduate students and recent PhDs! Everyone in the field has been there. It’s senior year, you’re just finishing up your thesis or your senior project, and your advisors and favorite professors are telling you that you’ll make an excellent candidate for grad school and that one day, they’d be proud to call you a colleague. It’s a tough slog, they tell you, to become an academic historian, but you have what it takes.

They don’t know what they’re talking about.

There is a huge surplus of PhDs on the academic job market -- especially in American and European history (if you’re interested in Africa or Latin America, congratulations, you’re employable). The jobs crisis in academic history today is easily the worst it’s been since the 1970s – and, given the tremendous structural changes in higher ed since then (especially the use of non-tenure-track adjunct faculty, who get paid very little to teach an awful lot – and who have no job security), it’s probably worse.

And history is one of the easier disciplines to find a job in – Slate ran an article recently with the cheerful title of “There are now academic jobs and getting a Ph.D. will make you into a horrible person: A jeremiad,” written by a visiting assistant professor of German at Ohio State University. (What is a visiting assistant professor, you ask? It’s a non-tenure-track, overworked, poorly paid post-Ph.D. position that maybe possibly might end up with a full-time hire – in five or six years.) It’s telling that Katie Roiphe wrote a rebuttal to the article. Roiphe is a gifted writer and journalist and assistant professor of journalism at New York University, but she came from a privileged background (her mother was a prominent first-wave feminist) before earning degrees at Harvard and Princeton.

Don’t have that kind of background yourself? Well, welcome to social class in higher education.

The point is, before taking the plunge and embarking on a PhD program, know what you’re getting into. The best way to do this is not to get career advice from the kindly eighty-year-old professor emeritus/a – it’s to talk to the people in the trenches, with similar backgrounds to yourself who are either in grad programs or who just got their PhDs. And remember, when it comes to career problems and job woes, liquor loosens tongues. In vino veritas.