GOP Leaders are Playing Chicken with the American Economy

Robert Brent Toplin is professor emeritus at the University of North Carolina, Wilmington, and has published several books about history, politics, and film, including "Radical Conservatism: The Right’s Political Religion." 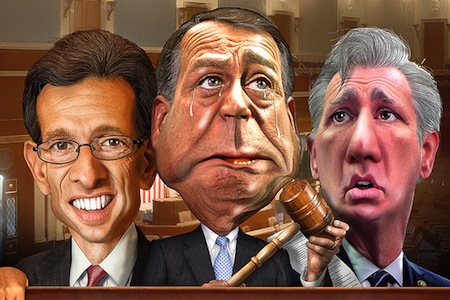 The illustrious House leadership of the Republican Party. Credit: Flickr/DonkeyHotey.

Now that progress is endangered. Republicans have been acting like it’s a great time to drive the economy into a storm.

In the last days of 2012 conservatives in Congress took the nation to the brink, threatening to block an increase in the debt ceiling. If they had gone the distance, the U.S. government would have been in default. Fortunately, Vice President Joe Biden and GOP Senate Minority Leader Mitch McConnell worked out a last-minute deal that averted catastrophe.

Republicans aroused new fears in recent weeks, indicating they will support a “sequester” if they don’t get their way. They adamantly oppose tax increases, pressing instead for big spending cuts to deal with the nation’s debt. Unfortunately, the “sequester” is a draconian solution to the budget standoff. It would slash $1.2 trillion from federal spending and inflict between 750,000 and a million job losses over the course of a year.

More threats are looming. GOP leaders warn that they will again try to block an increase in the debt ceiling if current budget negotiations do not satisfy them. A default on America’s financial obligations could start a worldwide financial meltdown. Foreign investors might lose confidence in U.S. treasuries and rush to sell off securities. Default would also require the U.S. government to hold off Social Security checks and Medicare payments.

No matter. Republicans, inspired by confrontation-minded partisans of the Tea Party, act like a game of chicken is justified.

High-stakes confrontation has become a familiar tactic in modern American politics. Since the early 1990s, when Republicans made radical opposition to taxation their modus operandi, they have been rejecting compromise on budget issues.

An obstinate conservative stand against tax increases was evident in 1990 when President George H.W. Bush confronted the nation’s budget problems. At the time, the U.S. debt was spiraling out of control, partly from President Reagan’s efforts to boost defense spending and partly from the cost of bailing out savings and loan institutions that crashed following broad deregulation. President Bush, anticipating an invasion of Iraq, feared that wartime spending could raise the debt to dangerous levels. When Bush reneged on an earlier promise (“Read my lips. No new taxes”), conservatives exploded in anger. They opposed Bush’s efforts to work out a compromise with Democrats. Some conservatives threatened to abandon Bush in the next presidential election. Large majorities of Republicans in Congress voted against compromise.

In 1993 Democratic President Bill Clinton tried to reduce a fast-growing debt. He aimed to increase the marginal income tax rate to 39.6 percent and raise the corporate tax rate by 1 percent. Not a single House Republican supported this remedy. The bill became law when Vice President Gore broke a fifty-fifty tie in the Senate. Eventually, that resulting increase in revenues contributed to a balancing of the U.S. budget. The measure established a strong foundation for economic boom in the late 1990s.

In 1995 and 1996 Republican opposition to taxes again drove the U.S. government to the brink. GOP leaders demanded large tax cuts that favored wealthy Americans along with major cuts in Medicare, food stamps, and other programs. President Clinton objected to severe cuts. Republicans then tried extraordinary pressure tactics. They shut down the federal government. National parks closed and 800,000 federal employees did not receive scheduled paychecks. Americans protested loudly. Republicans then relented, and Washington’s leaders arranged a compromise.

Now Republicans are presenting themselves to the American public as courageous politicians who are willing to stand up against irresponsible spending. They take pride in forcing major cutbacks. Speaker of the House John Boehner identified the rationale. He scolded, America must “stop the spending binge that’s hurting growth.”

Such chutzpah! GOP leaders, of all people, are demanding responsible budget agreement in Washington. Yet it was their party that squandered the surplus inherited from Bill Clinton’s presidency.

In the early 2000s President George W. Bush and his Republican allies in Congress turned gross assets into gross liabilities. Thanks to their policies, the nation’s surplus disappeared in a flash. They passed two major tax cuts that favored wealthy individuals and large corporations. Those cuts reduced federal revenues substantially. Bush and fellow Republicans also promoted a major war and occupation in Iraq. That questionable intervention eventually cost more than a trillion dollars. George W. Bush’s administration also proposed a large pharmacy benefit for senior citizens without funding the program adequately. And, of course, Republicans advocated deregulation of financial services, which left markets vulnerable to a crash. The Great Recession is responsible for a large chunk of the current debt.

Republicans did not sponsor these budget-busting policies single-handedly. Some Democrats endorsed them and voted for them as well. But Democrats were not the principal creators or champions of these controversial policies, and many Democrats criticized them.

Furthermore, Democrats have demonstrated a more responsible approach in recent negotiations over budgets. Obama and liberals in Congress have called for a balanced approach, one that involves both spending cuts and tax increases (such as modestly higher taxes on Americans who especially benefitted from the tax cuts of recent decades).

Most importantly, Obama and the liberals understand that political discussions about budgets should not include threats of shutting down the government or defaulting on the nation’s financial obligations. Only irresponsible radicals warn of nuclear options if they do not get their way. And only radicals threaten actions that may wreck the economic recovery and trigger another financial crisis.