Women in Combat: Not New, but a Milestone Nonetheless

Tanya L. Roth received a PhD in History from Washington University in St. Louis in 2011. Her dissertation, "Battling for Equality: Sexual Integration in the U.S. Military, 1945-1978", analyzes the evolution in women’s military roles during the Cold War. 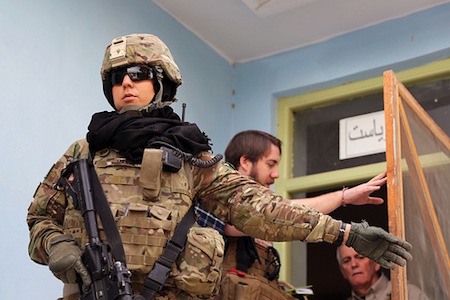 Only two weeks ago, media outlets across the country blazed with the announcement that one of Secretary of Defense Leon Panetta’s final acts in that position was to open all ground combat positions to servicewomen. The New York Times reported that the decision “overturns a 1994 Pentagon rule that restricts women from artillery, armor, infantry and other such combat roles even though in reality women have frequently found themselves in combat in Iraq and Afghanistan.” This decision represents a milestone for the history of the United States military as a whole, one on par with the initial decisions to admit women into the military, to desegregate the armed forces, and to end "Don’t Ask, Don’t Tell."

While Americans in and out of uniform recognize Panetta’s announcement as a major milestone -- whether they like or hate the upcoming changes -- the discussions of the policy change reflect a long-running trend of general ignorance of women’s military history. Our current cultural image of women in uniform is relatively recent, dating only back to the Gulf War or to the early 1980s. It has only been in the last thirty to thirty-five years that servicewomen have even had access to the plethora of opportunities most of them have today. Before the mid-1970s, women’s service looked much different, with women most often situated in the lower enlisted and officer ranks, concentrated in nursing or desk jobs that kept women far away from front lines. Most of those women would never have dreamed of being allowed to volunteer for combat roles, and to be sure, many would not have wanted to do so. In contrast, nearly one-third of female Marines surveyed last summer expressed an interest in combat positions.

To understand how women’s military roles evolved to where they are today, as well as attitudes about those positions, we need to look back to the early Cold War, when military leaders’ conflicts on admitting women to the armed forces revolved around personnel needs and fears that military service would compromise women’s idealized roles as future wives and mothers. The combat exclusion policies of the 1990s developed from this longer history of women’s roles in national defense and reflected long-held beliefs military officials and servicemen (and some servicewomen) held regarding appropriate service roles for women. These beliefs have not disappeared from the military today. The recently released 2012 Marine Corps survey on women in combat reveals that servicemen today have concerns over women in combat that include fears that women will receive special treatment, that men will get distracted by the need to “protect” women in the field, that women will get pregnant and compromise missions during deployment, and that accusations of sexual assault will increase -- presumably, false accusations. Many Americans opposed to the new policy (veterans, service members, and civilians) emphasize their concern over physical standards and women’s ability to meet those standards in specific combat roles, but few note that these standards were only developed in consideration of male personnel fulfilling these roles. This concern illuminates the basic idea that the U.S. military remains an institution that revolves around the assumption that defense is an activity undertaken primarily by men.

Admitting women to combat roles challenges this assumption on its face, but then again, women have been challenging this assumption for centuries. Molly Pitcher famously stood in for her husband at the cannon during the American Revolution, while Jenny Hodgers successfully disguised herself as Alfred Cashier, fighting through the Civil War and living as a man for decades after. Nurses have managed the aftermath of battles, reassembling men’s bodies in all war zones for more than a century. After World War II, military leaders, President Truman, and Congress found women’s military service so valuable that women obtained a permanent place in national defense beyond the nursing corps, where they had already been serving for nearly half a century.

What women have never had in the armed forces, however, is complete equality with men. From the earliest days, women have had to prove themselves worthy of fighting alongside men again and again. Well before second-wave feminists gained attention for their efforts to fight for women’s equality, servicewomen were fighting their own battles on a daily basis. While servicewomen were entitled to equal pay with men based on rank, the provisions of the 1948 Women’s Armed Services Integration Act capped women’s ranks. Trends in job assignments also continued to keep women in lower-paying and lower-ranking positions throughout the Cold War; not until 1970 could women attain the rank of general, and the first four-star female general was named only in 2008. Until the 1970s, servicewomen who became pregnant were subject to automatic discharge, and into the 1960s, an optional marriage discharge policy allowed women to end their military service early if they became a wife.

Throughout the 1950s, 1960s, and 1970s, servicewomen at all levels fought to change such policies that restricted their ability to serve their country. During the height of second-wave feminism, Air Force General Jeanne Holm proclaimed loudly that servicewomen had long been pushing for equality -- and that they had almost achieved it. That year, women began enrolling at the service academies for the first time. By 1978, the last of the separate women’s military corps would disappear, one of many changes in the 1970s that included women in camouflage, weapons training for all women, and early experiments with co-ed basic training.

Our recent history is one in which women have continued to gain access to previously off-limits areas of military service, from the 2010 decision to allow women to serve on submarines, to the end of "Don’t Ask, Don’t Tell," to Panetta’s order to end the combat exclusion policy. While General Holm was confident that servicewomen were close to achieving equality in 1976, the truth is that equality for women in the military remains elusive. Panetta has made an important step in opening more doors for women, a step that challenges military leaders, service members at all levels, and Americans to rethink just how we conceive of national defense.

The end of combat exclusions for women has the potential to be an important turning point in the history of the American military. Simply removing combat exclusions, however, will not help achieve equality on the basis of sex in the armed forces. Changing policy is only the beginning; the question is whether service members will be able to move beyond long-held stereotypes and cultural biases that continue to emphasize military service as a masculine activity that many assume women are not equipped to handle physically, mentally, or emotionally. In the twenty-first century, it’s time to reevaluate not only the role of national defense in American society, but the nature of defense itself.