Nick Turse is the managing editor of TomDispatch.com and a fellow at the Nation Institute.  An award-winning journalist, his work has appeared in the Los Angeles Times, the Nation, and regularly at TomDispatch. He is the author most recently of "Kill Anything that Moves: The Real American War in Vietnam" (The American Empire Project, Metropolitan Books).  Published on January 15th, it offers a new look at the American war machine in Vietnam and the suffering it caused. His website is NickTurse.com.  You can follow him on Tumblr and on Facebook. 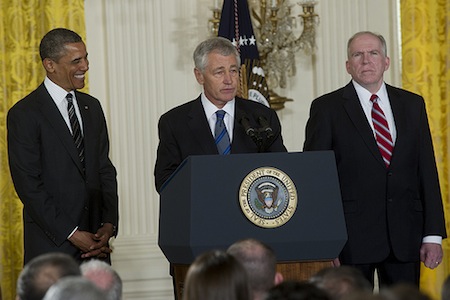 He’s been battered by big-money conservative groups looking to derail his bid for secretary of defense. Critics say he wants to end America’s nuclear program.  They claim he’s anti-Israel and soft on Iran. So you can expect intense questioning -- if only for theatrical effect -- about all of the above (and undoubtedly then some) as Chuck Hagel faces his Senate confirmation hearings today.

You can be sure of one other thing: Hagel’s military service in Vietnam will be mentioned -- and praised. It’s likely, however, to be in a separate and distinct category, unrelated to the pointed questions about current issues like defense priorities, his beliefs on the use of force abroad, or the Defense Department’s role in counterterrorism operations. You can also be sure of this: no senator will ask Chuck Hagel about his presence during the machine-gunning of an orphanage in Vietnam’s Mekong Delta or the lessons he might have drawn from that incident.

Nor is any senator apt to ask what Hagel might do if allegations about similar acts by American troops emerge in Afghanistan or elsewhere. Nor will some senator question him on the possible parallels between the CIA-run Phoenix Program, a joint U.S.-Vietnamese venture focused on identifying and killing civilians associated with South Vietnam’s revolutionary shadow government, and the CIA’s current targeted-killing-by-drone campaign in Pakistan’s tribal borderlands. Nor, for that matter, is he likely to be asked about the lessons he learned fighting a war in a foreign land among a civilian population where innocents and enemies were often hard to tell apart. If, however, Hagel’s military experience is to be touted as a key qualification for his becoming secretary of defense, shouldn’t the American people have some idea of just what that experience was really like and how it shaped his thinking in regard to today’s wars?

Chuck Hagel on Murder in Vietnam

"In Chuck Hagel our troops see a decorated combat veteran of character and strength -- they see him as one of their own," President Obama said as he nominated the former Republican senator from Nebraska to become the first former enlisted service member and first Vietnam veteran to serve as secretary of defense. He went on to call him “the leader that our troops deserve.”

Chuck Hagel and his younger brother, Tom, fought together in Vietnam in 1968. The two are believed to be the only brothers to have served in the same infantry squad in that war and even more remarkably, each ended up saving the other's life. “With Chuck, our troops will always know, just as Sergeant Hagel was there for his own brother, Secretary Hagel will be there for you,” the president said.

Largely unnoted was the falling out the brothers had over the conflict. After returning home, Tom began protesting the war, while Chuck defended it. Eventually, the Hagel brothers reconciled and even returned to Vietnam together in 1999. Years before, however, the two sat down with journalist and historian Myra MacPherson and talked about the war. Although their interpretations of what they had been through differed, it’s hard not to come away with the sense that both witnessed U.S. atrocities, and that Chuck Hagel’s vision of the war is far more brutal than most Americans imagine. That his experience of Vietnam would include such incidents should hardly be surprising, especially given the fact that Hagel served in the 9th Infantry Division under one of the most notorious U.S. commanders, Julian Ewell, known more colorfully as “the Butcher of the Delta.”

The Hagel brothers, MacPherson recounts in her moving and important history Long Time Passing: Vietnam and the Haunted Generation, argued over whether American troops were “murdering” people. Chuck disagreed at first, pointing instead to the depredations of Vietnamese revolutionary forces. Tom reminded his brother of the CIA’s Phoenix Program which, with an estimated body count of more than 20,000 Vietnamese, too often turned murderous and was no less regularly used by corrupt South Vietnamese government officials to settle personal grudges. “There was some of that,” Chuck finally granted.

Tom then raised an example that hit closer to home -- the time, after an enemy attack, when a sergeant from their unit took out his frustrations on a nearby orphanage. “Remember the orphanage, Chuck... That sergeant was so drunk and so pissed off that he crawled up on that track [armored personnel carrier] and opened up on that orphanage with a fifty-caliber machine gun,” Tom said.

When Chuck started to object, MacPherson writes, his brother was insistent. “Chuck, you were there! Down at the bottom of the sandhill.” Skeptically, Chuck asked his brother if he was saying the sergeant had “slaughtered children in the orphanage.” Tom granted that he didn’t know for sure, “because none of us went in to check.” Chuck responded, “In any war you can take any isolated incident...”

But the war Tom Hagel detailed to MacPherson wasn’t one punctuated by a few isolated “incidents.” He would talk about officers ordering the mutilation of enemy dead and soldiers shooting up and burning down a village, about how helicopter gunships and napalm decimated large areas of the countryside, about the lethality of indiscriminate weapons fire and about coming upon the bodies of women and children when firefights were over. He also recounted, in detail, a July 1968 assault on a “hardcore” enemy village in which their unit took part. After the battle had ended, he said, a lieutenant shot and killed a civilian in cold blood. “We’re collecting all the NVA [North Vietnamese Army] bodies and this woman walks out of a hootch. He just shot her dead,” Tom recalled.

The Hagel Hearings: America’s Last Best Chance for the Truth

Recently, MacPherson wrote an op-ed in the New York Times in support of Chuck Hagel’s bid to serve as Secretary of Defense: “His experience has taught him the physical and mental toll of combat. He would surely think twice before sending young men and women into unnecessary, stupid, or unwinnable conflicts... One thing I know: Chuck Hagel will stand up to whatever is thrown at him.”

Tom Hagel has recently talked about his brother in similarly glowing terms. “He’s going to do a great job, he’ll be totally committed to it,” he told Politico. “I think he will bring special sensitivity for enlisted personnel to the job, because, of course, of his experiences as an enlisted person in Nam.”

While he ultimately voted to authorize the war in Iraq -- despite grave misgivings -- there is a perception that, in the future, Hagel would be reticent to plunge the United States into yet more reckless wars and a strong belief exists among his supporters that he will stand up for America’s sons and daughters in uniform. On one subject, however, Hagel’s Vietnam experience shows him in a lesser light: sensitivity to the plight of the men and women who live in America’s war zones. In this area, his seeming unwillingness to face up to, no less tell the whole truth about, the Vietnam War he saw should raise serious questions. Unfortunately, it’s a blind spot not just for him, but for official Washington generally, and probably much of the country as well.

It’s worth noting that the Hagel brothers left Vietnam just as their commanding general, Julian Ewell, launched a six-month operation in the Mekong Delta code-named Speedy Express. One whistleblowing veteran who served in that operation told the Army’s top generals that Ewell’s use of heavy firepower on the countryside resulted in a “My Lai each month” (a reference, of course, to the one massacre most Americans know about, in which U.S. troops slaughtered more than 500 civilians, most of them women, children, and elderly men). That veteran’s shocking allegations were kept secret and a nascent inquiry into them was suppressed by the Pentagon.

A later Newsweek investigation would conclude that as many as 5,000 civilians were killed during Speedy Express. A secret internal military report, commissioned after Newsweek published its account, suggested that the magazine had offered a low-end estimate. The document, kept secret and then buried for decades, concluded:

While there appears to be no means of determining the precise number of civilian casualties incurred by US forces during Operation Speedy Express, it would appear that the extent of these casualties was in fact substantial, and that a fairly solid case can be constructed to show that civilian casualties may have amounted to several thousand (between 5,000 and 7,000).

During the war, efforts by U.S. senators to look into Speedy Express were thwarted by Pentagon officials. More than four decades later, no senator is ever going to launch an investigation into what actually happened or the Pentagon cover-up that kept the American people in the dark for decades. Theoretically, the Hagel hearings do offer the Senate a belated chance to ask a few pertinent questions about the Vietnam War and the real lessons it holds for today’s era of continuous conflict and for the civilians in distant lands who suffer from it. But any such hope is, we know, sure to die a quick death in that Senate hearing room.

Chuck Hagel’s views on the Vietnam War underwent a fundamental shift following the release of audio tapes of President Lyndon Johnson admitting, in 1964, that the war was unwinnable. That "cold political calculation" caused Hagel to vow that he would "never, ever remain silent when that kind of thinking put more American lives at risk in any conflict."

But what about lives other than those of Americans? What about children in shot-up orphanages or women who survive a murderous crossfire only to be gunned down in cold blood? Chuck Hagel may well be, as Mr. Obama contends, “the leader that our troops deserve.” But don’t the American people deserve a little honesty from that leader about the war that shaped him? In these few days, the senators considering his nomination have an opportunity, perhaps the last one available, to get some answers about a war whose realities, never quite faced here, continue to dog us so many decades later. It’s a shame that they are sure to pass it up in favor of the usual political theater.

To stay on top of important articles like these, sign up to receive the latest updates from TomDispatch.com here.