The Hidden Link Between Illegal Immigrants and Fugitive Slaves

Stanley Harrold is professor of history at South Carolina State University and author of numerous books on the antislavery movement and the Civil War era, including "Border War: Fighting over Slavery before the Civil War." 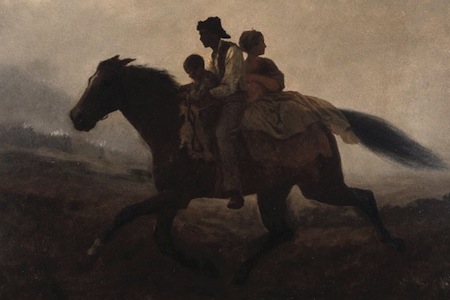 Slave escapes from the South to the North and Canada happened frequently during the decades prior to the Civil War. Such escapes had a major role in causing the war. From the 1830s through the 1850s, people (North and South, black and white) called the escapees fugitive slaves or runaway slaves. Of the two terms, I prefer the former. Runaway seems demeaning. It suggests triviality or that the slaves deserted masters who deserved loyalty. Some who study the slave escape networks known collectively as the underground railroad go further. They object to using the term slaves and prefer enslaved people. They call slaves who left their masters to head north freedom seekers.

During the pre-Civil War decades, people did not use the term freedom seekers. The closest that I have found in antebellum sources is freedom-hunters. Radical antislavery journalist Joshua Leavitt of Boston used this term in 1841, as he contrasted the escapees with slave-hunters who sought to capture and re-enslave them. What is important for both freedom seekers and freedom-hunters is their emphasis on slave action in gaining freedom. By escaping north, they forced the slavery issue on the nation.

Illegal immigrant, like freedom seeker, is a term that did not exist in the Civil War era. Yet, better than freedom seeker, when applied to fugitive slaves, illegal immigrant facilitates understanding of the relationship between the pre–Civil War black struggle for freedom and the current struggle over the status of many Hispanic immigrants to this country.

Fugitive slaves were the illegal immigrants of their time, despite the fact that the U.S. did not restrict foreign immigration until 1875. Even though native-born Americans harbored widespread intense prejudice against the foreign born, immigrants from Europe came freely to American shores. Meanwhile Congress, through the Fugitive Slave Law of 1793 and the harsher Fugitive Slave Law of 1850, acted against northward migration of enslaved black people from the South. Those apprehended under these laws could be forcibly returned south to their masters. This amounted to a system of anti-immigrant vigilance strikingly similar to the system in force today. The pre–Civil War system aimed to keep African Americans out of the North. The current system aims to keep unskilled workers, from Mexico, Central America, and Latin America generally, out of the United States. Those caught illegally in the U.S. may be sent south to their homeland.

Hispanic immigrants, and those who help them, clandestinely cross the U.S.-Mexican border and head north. Fugitive slaves, and those who helped them, developed similar skills to cross the Mason-Dixon Line and the Ohio River. There are also parallels between safe-houses for Hispanic migrants today and antebellum America’s underground railroad stations. But employers’ economic interests are key to understanding why fugitive slave laws then and immigration laws now are difficult to enforce. Today employers shield illegal immigrants and lobby against restrictions on hiring them. Before the Civil War, black and white northern farmers and homeowners resisted an anti-immigration program that, as is the case today, relied on law enforcement agents. Prior to 1850 local justices of the peace and constables had jurisdiction. After that year U.S. marshals took over. Today state police and the U.S. Border Patrol have similar roles. In some cases today there is violence. Similarly on occasion before the Civil War, northerners who employed fugitive slaves confronted law enforcement agents or provided fugitive slaves with guns to defend themselves.

Yet there is a crucial difference between the political situation antebellum America’s “illegals” faced and what today’s immigrants face. Powerful pre–Civil War southerners demanded return of their fugitive slaves. This demand produced the fugitive slave laws and enforcement of them. In contrast, today’s illegal immigrants flee unemployment and poverty rather than masters and slavery. No one in their home countries demands that the U.S. send them back. This difference suggests that today’s illegal immigrants will more easily achieve citizenship than did American slaves.