Jonathan Dresner is an associate professor of Japanese history at Pittsburg State University. 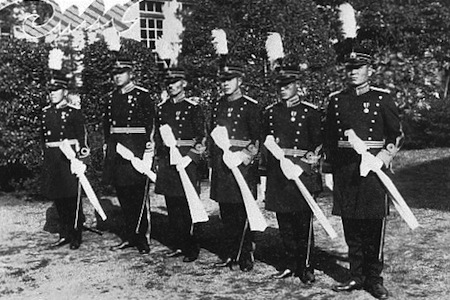 Cadets in the Imperial Japanese Army, circa 1934.

There are good reasons to bring Japan into the gun control debate in the United States: the relative success of firearms regulation in Japan, the recent rise of gun violence connected to organized crime, the history of weapons-carrying elites, etc. But WWII had nothing whatsoever to do with gun rights, gun control, or the 2nd Amendment.

Why bring this up? Because of Ed Emery, Republican representative to the Missouri state legislature from Lamar, MO. In a video produced last April, Rep. Emery said:

Randy Turner, who posted the video recently, says that “That ridiculous story has been circulating for decades”, but this is the first I’ve heard of it. As Turner says, “No reputable historian takes it seriously.”

I’m not a specialist on Japanese military history, but there are a few points that are worth making. Japan did attack American territory directly, both in Hawaii and in the Aleutians, and had substantial plans for occupying Hawaii if a second opportunity for assault presented itself. Japan also attacked the US mainland, or “land mass,” with sea-based and balloon bomb attacks.

More importantly, attacking the U.S. mainland wouldn’t have advanced the primary, or even secondary, strategic aims of the Japanese military in WWII, and wouldn’t have been seriously considered until after more important goals were met. Japan’s primary goal in WWII, remember, was defeating Chinese resistance to Japanese control so as to establish a stable, secure colonial foothold on the Asian continent. In order to maintain military production, Japan needed reliable sources of metals, minerals, oil, and rubber, materials that the United States had stopped selling Japan as part of the attempt to get Japan to back away from China. The attack on Pearl Harbor and the Aleutian island chain was a bit of a feint, to damage US military capacity in the Pacific and to blunt any response to Japanese seizure of the Philippines, Dutch East Indies, and other territories in the South Pacific. Those territories were valuable to Japan for their mineral wealth, oil and rubber: exploiting those resources would allow Japan to continue fighting the war in China.

Needless to say, any greater ambitions Japan had about Pacific domination were cut down by the loss of carrier groups at Midway and Coral Sea, which meant that Japan’s ability to project military might across the ocean was drastically reduced. At no time after that was there any serious discussion of “taking the fight to America.”

As far as fearing the well-armed American populace, instead of the American military, it’s hard to believe that the Japanese military would have treated them differently than the Chinese, who waged both large-force and guerilla-style operations against Japanese forces with great vigor and frequency. I don’t know what the distribution of guns was like in China before and during the Japanese invasion, but remember that China had been through twenty years of warlordism and civil war before the 1937 outbreak of hostilities, so there were certainly plenty of modern weapons and military veterans in the population.