Jennifer Scanlon is the William R. Kenan, Jr. Professor of the Humanities in Gender and Women’s Studies at Bowdoin College and an OAH Distinguished Lecturer. She is the author, most recently, of "Bad Girls Go Everywhere: The Life of Helen Gurley Brown." 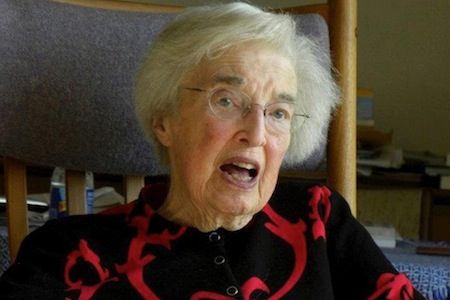 Gerda Lerner, eminent scholar and pioneer in the field of women’s history, passed away on January 2, 2013, at age 92. There are so many ways and reasons to remember Gerda Lerner: her activism on behalf of women and women historians; her invaluable scholarship; her irascibility in the face of injustice; her demands on herself and on the profession; her inspiration and her gifts.

Born in 1920 in Vienna, into an upper-middle-class Jewish family, Gerda Kronstein had a keen sense of justice from an early age. Jailed by the Nazis as a teenager, she was able to flee with her family to Lichtenstein and eventually make her way to New York. After her first short-lived marriage ended, she married fellow leftist and social activist Carl Lerner, with whom she had two children. When her children were older, Lerner entered college through the nation’s first program specifically designed for nontraditional female students, at the New School for Social Research.

While still an undergraduate, Lerner developed one of the first courses in U.S. women’s history. From there, she went on to Columbia University, completing her PhD in quick form and writing, in spite of her professors’ protestations, the dissertation that would become her first published work of history, The Grimké Sisters from South Carolina: Rebels Against Slavery (1967). Her next book, The Woman in American History (1971), one of the first textbooks in the field, was followed a year later by Black Women in White America, a collection of primary source materials that helped found the field of black women’s history. Lerner’s subsequent work on the history of patriarchy influenced theoretical developments in the fields of women’s history, global history, women’s studies, and gender studies.

Lerner had an expansive historical imagination, in part at least because of the wide range of life experiences that preceded her entry into the field. As one of her colleagues, Stanlie James, put it, “Perhaps because of her early experiences with fascism, anti-Semitism, immigration and poverty, her scholarship was nuanced, careful and smart and always inclusive of the critical dimensions and intersections of race, gender and class.” As an adult, she had been a writer, community activist, screenwriter, and parent well before she entered the historical profession; these experiences, too, surely influenced her work. Lerner herself claimed as much, putting it this way: “My commitment to women’s history came out of my life, not out of my head.”

Gerda Lerner’s activism extended to, and in fact was bound up with, her scholarship. At the same time that she was writing her PhD dissertation, she served as one of the founding members of the National Organization for Women (NOW). In 1972, while teaching at Sarah Lawrence College, she and historian Joan Kelly founded the first master’s degree program in women’s history. Less than a decade later, in 1980, she moved to the University of Wisconsin to launch the nation’s first PhD program in the field. Many years later, after having earned fourteen honorary degrees (she would earn seventeen in all), Lerner assiduously unstitched each of her academic hoods, burdened by the history of exclusion they represented, and commissioned an artist to remake them into a traditional women’s art form, a quilt.

Gerda Lerner’s death has occasioned spirited and heartfelt conversations among historians and feminist scholars in a range of fields. One of my friends remembers being in Professor Lerner’s first women’s history class at Sarah Lawrence. A former student of mine writes about reading Lerner in a women’s studies class -- and then immediately changing her major to history. Lerner’s former students remember the high expectations she set for them. Several of my mentors remember working with her to found the Coordinating Council for Women in the Historical Profession (CCWHP), through which they claimed a space as women in a profession notoriously resistant to including them either as subjects or as practitioners.

As one of the first feminist interventions in the field, the CCWHP was founded in 1969, as Berenice Carroll puts it, “to change the profession of history, to change historical scholarship, and to change the direction of our own history.” The group took the feminist mantra, “the personal is political,” and applied it to the field of history, with spectacular results. They read, critiqued, and encouraged the publication of each other’s work; organized networks to create course materials and circulate syllabi in the field; demanded sessions in women’s history at the annual American Historical Association and Organization of American Historians meetings; fought to establish graduate fellowships, foundation grants, and book awards in the field; and formed professional caucuses that in turn mandated simple but important changes, like eliminating the use of hotel bedrooms for job interviews. They looked around, and where they saw injustice, they exacted change. “In the end,” says Lerner’s friend, Alice Kessler-Harris, “we can credit the CCWHP with pressuring the major historical societies to acknowledge women as full members of the profession.”

In 1981, Gerda Lerner was elected to the presidency of the OAH. She was only the second female president in the organization’s history, but since then, ten women have been elected to that office, thanks in no small part to her determination to democratize the profession. She founded the OAH Distinguished Lectureship Program, one of the organization’s most successful initiatives. Together with Amy Swerdlow and Alice Kessler-Harris, Lerner organized a summer institute for women leaders, which encouraged Congress to declare the first National Women’s History Week, which now occupies not just a week but the entire month of March. She built a career of making the invisible visible.

So many people I know, it seems, have Gerda Lerner stories, and I am no exception. When, in 1983, I applied to PhD programs in women’s history, I didn’t tell my parents anything about it, knowing they would have trouble believing such a course of study legitimate. Once I had been accepted into a program, with full funding, I let them know of my plans. “Women’s history,” my mother replied incredulously, “you could fit that into a teacup.” Fortunately for me, I had been already been introduced to Gerda Lerner, who had given me the permission and inspiration I needed.

Gerda Lerner will be remembered for so many things, but high on the list, certainly, will be the profound gift of granting generations of women permission to take other women, in all their complexity, seriously as historical subjects. Once they do that, of course, women have to take themselves, their mothers and aunts and sisters, their friends, seriously as well. It is, to be sure, an ongoing revolution.