Dr. Jeffrey S. Reznick is Chief of the History of Medicine Division in the U.S. National Library of Medicine, National Institutes of Health, Honorary Research Fellow in the Center for War Studies of the University of Birmingham, and a Fellow of the Royal Historical Society. He is the author, most recently, of John Galsworthy and Disabled Soldiers of the Great War, with an Illustrated Selection of His Writings (Manchester University Press, 2009). 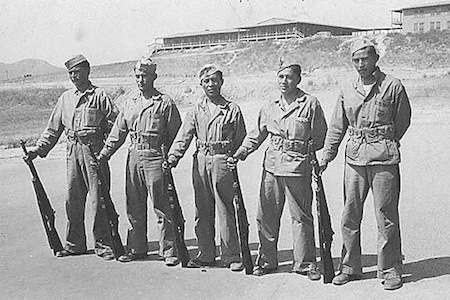 The passing of Navajo code talker George Smith last month gives us pause this Veterans Day to honor the men from two dozen Native American nations who served the United States military during both world wars. Those of World War II have captured the American conscience, and they do all the more as America’s “greatest generation” rapidly disappears.

Mr. Smith was one of the last surviving Native American code talkers who helped the U.S. military win victory during World War II, particularly in the Pacific, by sending messages in their native languages.

Mr. Smith and his contemporaries – from the Navajo nation, and others, like the Choctaw and Cherokee nations – operated on the front lines, relaying by radio and telegraph vital tactical information faster and more securely than any conventional military code. No message sent by a code talker was ever successfully decoded by enemy forces.

But since the military considered the code talker program to be classified, the code talkers had to take an oath of secrecy about their service when they returned home. The talkers were not allowed to talk. The program was finally declassified in 1968.

The code talkers honored their oath of silence for decades, but for some the silence took a toll as it combined with combat-related stress and postwar social conditions for Native Americans. Many of these veterans sought and found relief through traditional healing ceremonies like the Navajo Enemy Way Ceremony, which uses prayer, talking circles, drumming, sweat lodges, and other traditional healing practices to help relieve the veteran of pre-and post-combat stress and sustain connections with family, community, and Native culture.

Such ceremonies are vital, as Navajo spiritual leader Mr. Alfred Gibson has observed: “When soldiers go overseas, we give them warrior ceremonies to armor and protect them against the battle; when the soldier comes back, we have to remove that armor, to help him reconnect with his home.” Today, the U.S. Veterans Administration and its health professionals support the use of such ceremonies for the health and well-being of Native American veterans returning from war.

This Veterans Day, let’s honor Mr. Smith and the hundreds of code talkers who served from all Native American nations during both world wars. Let’s remember the silence expected of these men after World War II, and let’s acknowledge more widely the respect now granted to Native American healing practices by one of our most important federal agencies.