The Inevitability of the Cold War

Michael Dobbs is author of a recently completed Cold War trilogy that includes “Down with Big Brother,” on the collapse of communism, “One Minute to Midnight,” on the Cuban missile crisis, and “Six Months in 1945.” 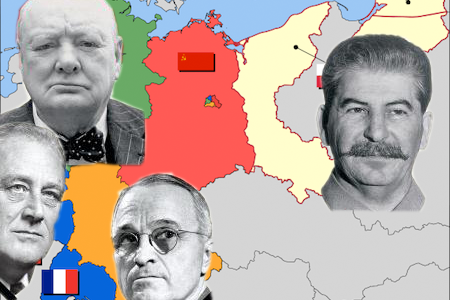 As a historian and a journalist, I am interested in hinge moments in history. I witnessed one such moment as a reporter for the Washington Post in the Soviet Union and Eastern Europe at the end of the Cold War. My new book, Six Months in 1945: FDR, Stalin, Churchill, and Truman -- from World War to Cold War, focuses on another, equally momentous, historical transition from one era to another.

Historians pretty much agree that the Cold War ended with the fall of the Berlin Wall on November 9, 1989. But when, why, and how it began has been the subject of much debate. Traditionalist historians emphasize the Sovietization of Eastern Europe, culminating in the Communist-led coup in Czechoslovakia in February 1948 orchestrated by Josef Stalin. Revisionists accuse President Truman of setting the stage for the Cold War with the bombing of Hiroshima in August 1945 and his embrace of “atomic diplomacy” against the Soviet Union.

The premise behind these competing versions of history is that one or other political leader was responsible for the great ideological clash that dominated the second half of the twentieth century. I disagree. I believe that the Cold War was the virtually inevitable sequel to World War II. As long as they were both fighting Nazi Germany, the United States and the Soviet Union had reason to preserve their alliance and paper over any disagreements. As soon as their common enemy was defeated, and Americans and Russians met each other in the heart of Europe, their political and economic interests diverged sharply. Friendship turned to rivalry in the blink of an eye.

With his twisted but occasionally brilliant grasp of historical forces, Adolf Hitler got it right when he concluded in April 1945 that the defeat of the Third Reich would leave “only two great Powers capable of confronting each other -- the United States and Soviet Russia.” He went on to predict that “the laws of both history and geography will compel these two Powers to a trial of strength, either military or in the fields of economics and ideology.”

Virtually all the watershed events of the early Cold War can be traced back to the six-month period between February and August 1945 that spanned the Yalta conference, the death of Franklin Roosevelt, the end of World War II, the disintegration of the anti-Hitler alliance, and the dawning of the atomic age. The Czechoslovak coup followed a pattern established a pattern established in Romania in the weeks immediately following Yalta, with the Moscow-backed Communists using their control over the security forces to seize complete power. Truman’s support for pro-Western governments in Greece and Turkey in 1947 followed logically from his earlier resistance to Soviet plans to acquire military bases along the Dardanelles and in the Mediterranean. The 1948-1949 Berlin blockade had its origins in the squabbles over Western access rights to the city during the Potsdam conference in July 1945.

Any chance of averting a global confrontation between the two emerging superpowers was overwhelmed by the nuclear arms race, which also began in this six-month period. Well before the bombing of Hiroshima, the Russians and the Americans were engaged in a frenzied competition to locate bomb-making materials amid the ruins of the Third Reich, and sign up German scientists for their nuclear and missile projects. Once Stalin knew that the Americans had an atomic bomb, he was determined to acquire one, too.

There is plenty of evidence that none of the principals wanted a Cold War. Although Stalin regarded a confrontation as inevitable over the long run, he would have preferred a period of détente with the imperialist camp that would have allowed Russia to repair the devastation caused by the war. But he was not prepared to sacrifice the territorial gains in Eastern Europe that had been acquired through so much sacrifice.

In their own fashion, American leaders were at least as ideological as Soviet leaders. Stalin was ready to divide up the continent, according to the principle that “everyone imposes his own system as far as his army can reach.” But this was anathema to the Americans who remained committed, in theory at least, to the Wilsonian proposition that the world had to be made “safe for democracy.”

Few Americans were more committed to the preservation of the wartime alliance than Harry Hopkins, FDR’s closest confidant and an early adviser to Truman. But even Hopkins was compelled to revise his rosy opinions about the prospects of post-war cooperation following a meeting with Stalin in Moscow in May 1945. “The American people want not only freedom for themselves,” he told the Soviet expert Charles Bohlen. “They want freedom throughout the world for other people as well.”

The incompatibility of the two competing ideologies was often clearer at a lower level than at the level of statesmen and senior diplomats. While the Big Three were trying to hammer out a plan for the joint occupation of Germany at Potsdam in July 1945, their soldiers were already shooting at each other in the streets of Berlin, a few miles down the road. These early skirmishes grew out of the struggle to control the city, but also represented two entirely different cultures, economic systems, and general world view. After a six-day tour of Germany that same month, a British intelligence officer, Goronwy Rees, concluded that “the war between the Russians and the democracies is approaching, and indeed has already begun.”

The onset of the Cold War is sometimes dated from Churchill’s Iron Curtain speech at Fulton, Missouri, in March 1946. But we forget that the British prime minister had been using such imagery long before. On May 12, 1945, five days after VE-day, he complained to Truman that “an iron curtain is drawn down” across the Russian front. “We do not know what is going on behind.” Churchill was referring here to an information curtain -- the indispensable prequel to the consolidation of Soviet control over a vast stretch of Europe.

Another widely accepted marker for the beginning of the Cold War is the “long telegram” sent by American diplomat George Kennan to the State Department in February 1946, in which he outlined the strategy that later became known as “containment.” But that, too, was hardly new. From his isolated perch in Moscow, Kennan had been long been convinced that Soviet Russia was an “unfit partner” for the United States and had advocated the division of Europe into American and Soviet spheres of influence. His “long telegram” differed from his earlier dispatches only in the enthusiastic reception that it was accorded in Washington.

If you want to go even further back into history, then consider the views of Alexis de Toqueville, who noted that America and Russia were guided by opposite ideological principles. “The principal instrument of the former is freedom; of the latter, servitude,” the French seer wrote in 1835. “Their starting point is different and their courses are not the same; yet each of them seems marked out by the will of Heaven to sway the destinies of half the globe.”

When it comes to the start of the Cold War, the “great man” theory of history does not explain very much. In their different ways, Roosevelt, Stalin, Churchill and Truman all struggled to prevent the division of the globe into rival ideological-military camps. How, despite this, they came to implement “the will of Heaven” is the story of six months in 1945.