The Cuban Missile Crisis ExComm Meetings: Getting it Right After 50 Years 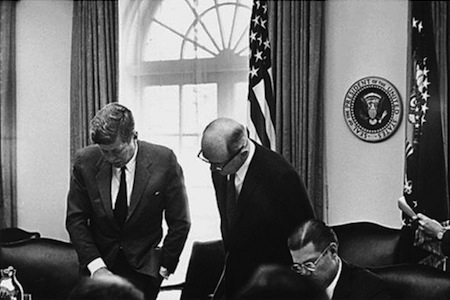 It is just over thirty years since, as historian at the JFK Library, I listened for the first time to the then classified recordings of the Cuban missile crisis White House meetings of the Executive Committee of the National Security Council (ExComm). I was the first non-member of the ExComm to hear these tapes; but, I assumed that the conventional accounts of the meetings -- especially in Robert Kennedy’s Thirteen Days -- were fundamentally accurate and reliable.

That assumption was shaken immediately by the recordings of the first meeting on Tuesday, October 16. I had recently reread the section on the missile crisis in Arthur Schlesinger’s 1978 biography of Robert Kennedy. Schlesinger, who had been granted special access to RFK’s papers by Ethel Kennedy, was unequivocal: “Robert Kennedy was the indispensible partner. Without him, John Kennedy would have found it far more difficult to overcome the demand for military action. ... It was Robert Kennedy ... who stopped the air strike madness in its tracks. ... Within the closed meetings of the so-called Executive Committee of the National Security Council, Robert Kennedy was a dove from the start.” (1)

Schlesinger backed up this judgment with a quote he found in the RFK papers from that October 16 meeting: “‘If you bomb the missile sites and the airports,’ he [RFK] said on the first day, ‘you are covering most of Cuba. You are going to kill an awful lot of people and take an awful lot of heat on it.’” The attorney general also warned that the Soviets would respond to U.S. bombing of the missile sites by simply sending in more missiles and by doing “the same thing [bombing U.S. missiles] in Turkey.”

In fact, this ostensibly dovish quote from RFK’s private papers was profoundly misleading, if not out-and-out deceptive. Bobby Kennedy was actually arguing that bombing the missile sites was a weak and inadequate response; he was instead demanding nothing less than a full-scale invasion of Cuba. Even Joint Chiefs of Staff chairman General Maxwell Taylor had cautioned against an invasion only minutes before when he warned the president “as to whether we invade or not. I think that’s the hardest question militarily in the whole business and one that we should look at very closely before we get our feet in that deep mud of Cuba.” (2) (Of course, readers must remember that before the opening of the ExComm tapes, Schlesinger could not have known the full context of RFK’s words).

The quote cited above underscores the possibility that Bobby Kennedy may have used the tapes selectively to shape and manipulate his place in the historical record. The draft manuscript of Thirteen Days, which likely had initially been intended for release in time for the president’s 1964 reelection campaign, was so tightly held within the Kennedy inner circle that many senior White House officials did not even know about its existence. JFK’s special assistant and confidant Kenneth O’Donnell, commenting on a version he read about six months after the president’s assassination, remarked to RFK, “I thought your brother was president during the missile crisis.” Bobby is said to have replied, “He’s not running, and I am.” (RFK ran successfully for a U.S. Senate seat from New York that year.) (3) Another version has RFK replying, “Jack wouldn’t mind.”

However, the misleading quote cited above was merely the tip of the proverbial iceberg. It turned out, as the tapes incontrovertibly revealed, that Robert Kennedy had created a largely fictional account of the ExComm meetings -- an account that has never been out of print since its publication in 1969 and has become the conventional template for virtually all discussions of the missile crisis.

Fifteen years after the release of the ExComm tapes, the mythical, dovish Robert Kennedy, as crafted in Thirteen Days, continues to exert an inexplicable influence over historians. Michael Dobbs, in an otherwise exemplary book, concludes that the younger Kennedy “was a chastened man” by October 27. (4) Robert Caro, the masterful biographer of Lyndon Johnson, claims that early in the first week of the crisis “the tone of ExComm’s discussions changed -- and the catalyst for that change was Robert Kennedy,” who revealed himself to be “a master of compromise [and] of diplomacy.” In fact, the tapes demonstrate that Robert Kennedy was confrontational and hawkish from day one through day thirteen -- and even beyond into the November post-crisis. (5)

Indeed, the RFK papers released this week by the JFK Library, include a memo to the president, written by RFK at the 9:00 p.m. meeting on Saturday, October 27, after his secret meeting with Ambassador Dobrynin, asserting that “No sense in going in against only A.A. [anti-aircraft] -- if we go in we go in hard.” He also notes that air-reserve planes had already been called up and urges “calling up ships tomorrow.” (6)

It is now clear as well that many of RFK’s own most important and still widely accepted contentions in Thirteen Days contradict the incontrovertible evidence on the ExComm tapes. (7) For example, RFK claimed that:

In addition, many other critical aspects of the ExComm meetings are all but ignored or obfuscated in Thirteen Days. These distortions extend well beyond RFK’s personal role in the discussions. In fact, in and of itself, Thirteen Days is an enormous, if inadvertent and unintended, testament to the validity of the secret ExComm tapes as a uniquely objective historical source.

(3) Conversation with Dan H. Fenn Jr., a member of the Kennedy White House staff and founding director of the JFK Library, June 18, 2011.

(6) This handwritten note was found in an October 16th file in the RFK papers; however, the indicated meeting time (“Night meeting, 9 P.M.”) and the content of the note suggest otherwise. It was at the Saturday, October 27th 9 P.M. meeting that Robert McNamara recommended calling up air reserve squadrons (JFK agreed) and naval troop transports for an invasion of Cuba (JFK urged a delay because “what we’re tryin’ to do is get a settlement of this”). This context almost certainly places the memo on the late evening of Black Saturday. (Stern, Averting ‘the Final Failure,” 374-75)