What If Nixon Had Been President During the Cuban Missile Crisis?

Harvey Simon is a Washington-based writer. He is the author of "The Madman Theory," an alternate history novel of the Cuban Missile Crisis. More information is available at www.themadmantheory.com 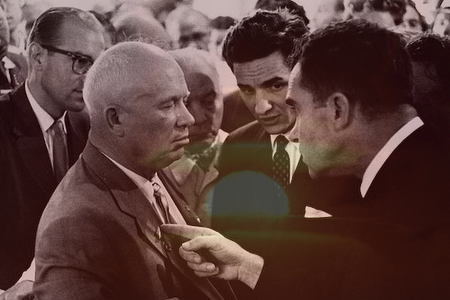 Fifty years ago this month, the world got lucky. With a show of force and a secret trade, President John F. Kennedy persuaded Soviet Premier Nikita Khrushchev to dismantle a clandestine nuclear missile base the U.S. had discovered in Cuba without a single shot -- or missile -- being fired.

Ever since, scholars, statesmen and academics have plumbed the Cuban Missile Crisis for lessons about leadership, nuclear weapons and international relations, focusing on the possible miscalculations or accidents that could have sparked World War III during those tense thirteen days in 1962.

But these what-if scenarios leave out the most revealing counterfactual of all: Would there have been war without Kennedy as president?

It is a question worth asking not only for the lessons that can be learned about leadership and the role of individuals in shaping the course of history, but because we came within an eyelash of living in such a world.

The 1960 Republican candidate, Vice President Richard M. Nixon, was widely favored to win that year’s presidential election over Kennedy, who had a well-justified reputation as a lightweight playboy senator. Nixon had traveled the world extensively during his eight years serving in the White House with President Dwight D. Eisenhower and, at 47, was arguably the nation’s most experienced politician, aside from the president.

Some have argued Nixon was, in fact, the rightful winner of what turned out to be the closest presidential election in history. “Under the prevailing system, John F. Kennedy was inaugurated, but it is not at all clear that this was really the will of the people...,” Tom Wicker wrote in a forward to Neal R. Peirce’s Nixon biography. Nixon’s mother, Hannah, said Kennedy’s inauguration was, instead, God’s will.

Perhaps God saw the Cuban Missile Crisis coming and chose Kennedy. If so, it was a wise choice.

President Kennedy’s first reaction, upon learning on October 16, 1962, that a U.S. spy plane had discovered a Soviet nuclear missile base under construction in Cuba, was that U.S. military action -- bombing Cuba and possibly invading the island -- would be necessary. In short order, that was the unanimous recommendation of the Joint Chiefs of Staff.

Due in large measure to the advice of his brother, Robert, the president decided first to try a military blockade, or quarantine, around Cuba to prevent more missiles from reaching the island and force Soviet Premier Nikita Khrushchev to remove the missiles already there. With that and a secret agreement to dismantle NATO missiles in Turkey -- a major concession to the Communists -- Kennedy persuaded Khrushchev to withdraw the missiles from Cuba.

Many of Kennedy’s other advisors initially agreed. But on the evening of October 18, the president noted how “opinions had obviously switched” from support for military action to a position favoring a naval blockade, or quarantine, around Cuba to prevent more missiles from reaching the island, with the aim of forcing Khrushchev to remove the missiles already there.

A memo from George Ball had put it plainly, arguing that a surprise strike would “alienate a great part of the civilized world by [our] behaving in a manner wholly contrary to our traditions, by pursuing a course of action that would cut directly athwart everything we have stood for during our national history, and condemn us as hypocrites in the opinion of the world.”

President Kennedy was soon among the doves. And with the blockade and a secret agreement to dismantle NATO missiles in Turkey -- a major concession to the Communists -- he persuaded Khrushchev to withdraw the missiles from Cuba.

What would Nixon have done? That question is at the heart of my counterfactual novel, The Madman Theory, a hyper-realistic examination of a 1960 Nixon administration at the time of the Missile Crisis.

If Nixon had been president during the Missile Crisis, there is no reason to believe he would not have shared Kennedy’s initial instinct for military action. Nixon is likely to have also have received advice that he try to resolve the crisis peacefully. In The Madman Theory, Leonard Hall -- a close Nixon associate – serves as Attorney General and is one voice for moderation. But Nixon is known for making end runs around administration officials he does not trust or agree with -- e.g., excluding Secretary of State William Rogers from talks with China in his actual presidency -- and, true to form, rides roughshod over Hall.

The same Joint Chiefs who advised Kennedy would have been in place were Nixon president, except for the chairman. On October 1, 1962, President Kennedy had replaced General Lyman Lemnitzer with General Maxwell Taylor. Taylor was among those who favored military action against Cuba, but he was a reformist compared with Lemnitzer, who I believe Nixon would have nominated for another term. Lemnitzer had earlier approved Operation Northwoods, which proposed staging terrorist acts in the U.S. that could be blamed on Cuba and used as a pretext for an American invasion to topple the Castro government.

Both Nixon and Kennedy wanted desperately to get rid of Castro. The culmination of Kennedy’s efforts to topple Castro came when he approved an invasion by CIA-trained Cuban exiles, who came ashore in Cuba at the Bay of Pigs in April 1961. The plan had been hatched in the Eisenhower administration and Vice President Nixon had been the White House point person for the operation.

The Bay of Pigs was a spectacular failure for Kennedy. It taught him to be wary of the military’s advice -- a lesson that served him well in resisting the Joint Chiefs when they called for military action during the Missile Crisis. Nixon would have had fewer qualms about maintaining the pretense that the U.S. had nothing to do with the 1961 invasion and, for this reason, would not have vetoed the CIA’s original, more suitable landing site, as Kennedy did. Instead, we would know of the Cuba operation as the Trinidad Invasion.

The invading exiles would likely have had more success landing at Trinidad -- it had a more suitable terrain and perhaps a more anti-Castro population -- and forming a guerilla army in the Escambray Mountains to harass Castro.

In the period preceding the Missile Crisis, I believe Nixon would have been looking for a pretext for a full-scale military invasion and would have seen the missiles as the perfect excuse for finally rolling back the tide of communism that had swept under Republican watch to within 90 miles of American shores.

Military action against Cuba would have presented the same danger for Nixon as Kennedy envisioned when he considered what might occur if the blockade failed to end the crisis. Khrushchev, Kennedy believed, might take over West Berlin, or attack NATO’s nuclear missiles in Turkey. Either move could easily escalate into global nuclear war.

To prevent this or other Soviet moves, Nixon had a plan. He called it his madman theory. If he could convince Khrushchev he was crazy enough to launch an all-out nuclear war, the Soviet Union would be deterred from taking any aggressive action.

Nixon could effectively demonstrate his determination to fight a nuclear war by transferring government operations to Mount Weather, in Virginia. Known as the alternate White House, this massive underground complex had been completed just four years earlier as part of a network of sites outside Washington that could be used to continue government operations in the event of nuclear war. To be effective, the president would need to relocate before missiles were launched against Washington.

President Kennedy decided against going to Mount Weather, also known as the Special Facility. Jackie Kennedy didn’t want to leave Washington and there was some fear that Cabinet officials, barred from bringing family members, would refuse to go.

Nixon’s move to Mount Weather would have made nuclear war more likely, not less. If Khrushchev believed the U.S. was preparing to launch nuclear missiles and bombers against the Soviet Union, he might decide it would be best to strike first.

Khrushchev would also have other cause to fear the worst. His orders to General Issa Pliyev, commander-in-chief of Soviet forces in Cuba, were to defend the island with every means at his disposal, save the city-destroying nuclear missiles aimed at the U.S.

And Khrushchev had given Pliyev the right weapons for a successful defense. Soviet forces in Cuba were equipped with tactical nuclear missiles designed to be used on the battlefield to destroy enemy ships and troops. Soviet Luna rockets had a range of 20 miles and carried a two-kiloton warhead. Another type, the FKR, had a range of 110 miles and packed a 14-kiloton warhead.

The Kremlin sent this message to Pliyev: “In the event of a landing of the opponent’s forces on the island of Cuba, if there is a concentration of enemy ships with landing forces near the coast of Cuba in its territorial waters ... and there is no possibility to receive directives from the [Soviet] Ministry of Defense, you are personally allowed as an exception to take the decision to apply the tactical nuclear Luna missiles as a means of local war for the destruction of the opponent...”

In the event of massive U.S. bombing it would have been difficult for Khrushchev to either revoke these orders or for Pliyev to communicate with Moscow. The result would have been the first-use of nuclear weapons against U.S. forces.

The U.S. had a longstanding response prepared for such an attack. Known as the Single Integrated Operational Plan, or SIOP, it called for a highly coordinated nuclear attack on more than 3700 pre-assigned targets throughout the Communist world -- including China.

General Taylor, who President Kennedy brought in to head the Joint Chiefs of Staff, favored giving the president a wider range of options. The JCS in a ’60 Nixon administration would have had no such advocate.

If Nixon had been president during the Cuban Missile Crisis, these would have been the first steps on the road to global thermonuclear war. Nixon would be hard pressed to resist the inevitable calls for U.S. retaliation. He might have tried to resist the institutional forces at work urging him to implement the SIOP, responding with a limited nuclear strike against a single Soviet military installation. And we can only hope Khrushchev would not have been taken in by Nixon’s madman bluff, resisting the logical response of attacking the U.S. first.