Is the Modern GOP a "Relic of Barbarism"?

Manisha Sinha teaches at the University of Massachusetts, Amherst and is the author of the forthcoming "The Slave's Cause: Abolition and the Origins of America's Interracial Democracy" from Yale University Press. 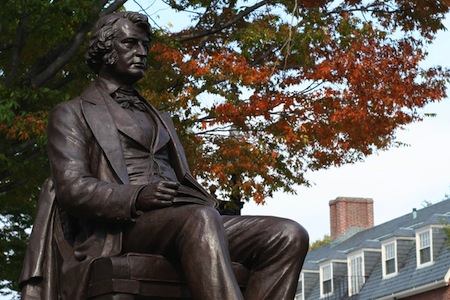 In its very first party platform during the presidential election of 1856, the Republican Party condemned slavery and polygamy, an allusion to the then Mormon practice, as the "twin relics of barbarism." Ironically, today the party itself seems poised to become a relic of barbarism. With its platform that denies even victims of rape and incest access to abortion and blatant attempts at disfranchisement, the GOP appears to be on the wrong side of history. Contemporary Republican politicians might do well to study their own party's origins during the age of the Civil War. Indeed, the present presidential race and the approaching hundred fiftieth anniversary of the Emancipation Proclamation beg for historical comparison.

On the eve of the Civil War, antislavery Republican politicians railed against the "Slave Power" crippling American democracy, the 360,000 southern slaveholders who in their opinion stole elections in Kansas. Today the thirty-three billionaires bankrolling Republican campaigns plot to buy the presidential election by hook or by crook. It is shocking that they represent an even smaller percentage of the American population than the much-reviled southern "slavocrats." In the nineteenth century, attacking "the money power" was a popular sport among most politicians at least since the rise of Jacksonian democracy. Charles Sumner, one of the founders of the party and a Radical Republican senator from Massachusetts condemned the alliance between the slave power and the money power in national politics. Between what he called "the lords of the lash" in the south and the "lords of the loom," referring to textile magnates in the north dependent on slave grown cotton.

But now plutocracy, thanks to the Supreme Court's Citizens United decision, rather than democracy is in vogue for Republicans. The party's first elected president, Abraham Lincoln, might well be condemned as a "socialist" advocating "class warfare" in the present day GOP. In his annual message to Congress in 1861, Lincoln wrote, "Labor is prior to, and independent of, capital. Capital is only the fruit of labor, and could never have existed if labor had not first existed. Labor is the superior of capital and deserves much the higher consideration."

Are you listening, Governor Romney?

The GOP, however, has so completely shed its origins that today, as historians and political commentators have long noted, its stronghold lies in the former Confederacy, states that would also staunchly oppose civil and voting rights for African Americans in the twentieth century. Besides the all-important swing states, voter repression drives have been most active here as immigration is turning these states from red to purple. The two recently concluded party conventions gave us a startling picture of the imagined national community not on stage but on their floors. The lily-white Republican convention presented a stark contrast to the rambunctious diverse milieu of the Democratic one. Certainly, the GOP no longer fits the moniker bestowed on it by its proslavery and racist critics in the North and South in the mid-nineteenth century, the "Black Republicans." And with good reason, President Obama evokes Lincoln and the ideal of citizenship that lies at the heart of American democracy to encompass a rapidly changing electorate.

The Republican moneyed elite of our times is set on inheriting the distasteful political legacy of its erstwhile slaveholding enemies, determined to protect its privileges at the cost of the nation. In fact, they have adopted the anti-democratic politics and constitutional philosophy of slaveholders and segregationists with a vengeance. Vice President Joe Biden's widely reported "gaffe" may have more historical truth to it than the avalanche of "objective" criticism from all sides that descended on him. Like Biden's remarks, Sumner's historic 1860 Senate speech, "The Barbarism of Slavery," was criticized as going too far. Sumner's words are worth recalling, not just slavery but also the "pretention" of racism he said were relics of "ancient barbarism" and must recede with the progress of civilization.

In the aftermath of the Civil War, when he emerged as the foremost champion for black rights in the Senate, Sumner presciently predicted the future of American democracy and race in a global context, "According to the best testimony now, the population of the earth is about thirteen hundred millions, of whom only three hundred and seventy-five millions are 'white men,' or less than one-fourth, so that, in claiming exclusive rights for 'white men,' you degrade nearly three quarters of the Human Family....while you sanction a Caste offensive to religion, an Oligarchy inconsistent with Republican Government, and a Monopoly which has the whole world as its footstool." On the rights of labor, women's rights, the rights of people of color, the rights of the poor, the rights of immigrants, and the American catchall, the middle class, over half the population, 47 percent according to Mitt Romney, the GOP seems hell bent on charting a course to the distant past, not the future.