On The Road To Ryan And Ruin

Lawrence Davidson is professor of history at West Chester University in West Chester, Pennsylvania. His academic work is focused on the history of American foreign relations with the Middle East. He also teaches courses in the history of science and modern European intellectual history. 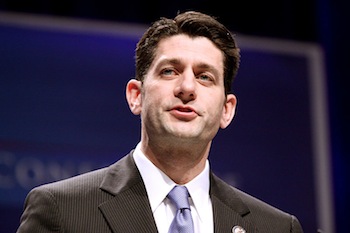 In the 132 years between 1797 and 1929, there was no effective regulation of the U.S. economy. No federal agencies existed to control corruption, fraud and exploitation on the part of the business class. Even during the Civil War, economic management on a national level was minimal and war profiteering common. As a result the country experienced thirty-three major economic downturns which impacted roughly sixty of the years in question. These included twenty-two recessions, four depressions, and seven economic “panics” (bank runs and failures).

Then came the Great Depression starting with the crash of the New York stock market in 1929. This soon became a worldwide affair which lasted until the onset of World War II. Millions were thrown out of work, agricultural production partially collapsed, and the fear of rebellion and revolution was palpable both in the U.S. and Europe.

It is to be noted that the way capitalism worked over these 132 years was a function of ideology. This was (and still is) the so-called free-market ideology which holds that if the government is kept as small as possible (basically only having responsibility for internal order, external defense, and the enforcement of contracts), citizens would have to pay very low taxes and be left alone to pursue their own prosperity. Thus, as the ideology goes, everyone will be free to maximize their own wealth and in doing so also maximize the wealth of the community as a whole.

The Great Depression was a real moment of truth for the capitalist West because it suggested to the open-minded that free-market ideology was seriously flawed. Free-market practices had brought the economic system to the brink of collapse, and Russia’s newly triumphant communists, espousing a command economy, represented serious competition. So, the question had to be answered: how best to modify the capitalist system so as to preserve the position of the ruling elite?

It was President Franklin Delano Roosevelt who came up with an answer, at least for the United States. Through a series of economic and social experiments he crafted the New Deal and promoted the notion of the welfare state. It should be emphasized that this was not socialism. In essence, the New Deal was capitalism with safety nets and subsidies. It meant that some entrepreneurs in areas such as agriculture, defense, and other businesses, actually got money from the government to produce their products. On the other end of the spectrum, government money was made available to keep the impoverished from starving and the unemployed solvent while they sought new jobs. A national pension plan was devised in the form of Social Security, and bank deposits up to a certain amount were insured. In addition, new agencies were created to monitor business activities, particularly the stock market and the banks, to prevent the sort of activities that had brought on many of the economic downturns of the past. This was a major step away from the ideal of a wholly free market but most of the citizenry, with the Great Depression at their backs, understood the necessity of the New Deal. Of course, taxes would eventually have to go up to help pay for it all.

Part II: How Quickly We Forget

Essentially, Roosevelt and the New Deal saved capitalism from itself. Left to those like Herbert Hoover, who could not escape the paradigm of free-market ideology, capitalism in the U.S. may well have followed much of Europe in succumbing to the revolutionary movements of the right or the left.

It has been sixty-seven years since the end of World War II, and during that time there have been eleven recessions -- but that's only ten years of sixty-seven! Further still, most have been mild affairs compared to the thirty-three recessions that came prior to the onset of the Great Depression, and the welfare safety net has helped the hardest hit to survive. However, since the 1980s, the U.S. economy has become more unstable and the downturns more severe.

What of the steadfast adherents to free-market ideology? It would have been nice for the world if the Great Depression had put an end to them all -- but that was not to be. For those who can understand things only with the help of rigid and all inclusive paradigms, ideology is what makes sense of an otherwise chaotic world. Ideology is also what defines good and evil for such minds.

It took forty years for free-market ideologues to reassert themselves under Ronald Reagan. That's two generations distant from the Depression -- which actually makes a great deal of sense. Unless purposefully passed on from one generation to the next, both skills and memories tend to dim and lose their meaning -- by the 1980s, the collective memory of the cost of unregulated capitalism had faded.

Reagan was a B-list actor and by no means an intellectual, surrounded by neoconservatives and free-marketeers. Working within the context of generational forgetfulness, he set us all on a path toward deregulation and a resurgence of free-market fundamentalism. The financial meltdown in 2008 was a direct result of these policies.

Amazingly, even after the near-occurance of another Great Depression (we're instead saddled with the Great Recession, as if that's a gigantic step up from an actual depression). We're still running down the free-market-at-any-price path. Mitt Romney and his running mate Paul Ryan are living proof of this. Ryan is the chairman of the Budget Committee in the GOP-controlled House and author of a proposed federal budget that would slash social spending (and those safety nets) by some $3.3 trillion, ditch Medicare and Medicaid, all while simultaneously cutting taxes for the wealthy. Ryan is no less than the reincarnation of a free marketeer who wants to recreate the circumstances that brought us all thirty-three major economic downturns crowned by the Great Depression.

It was University of California Professor Robert Reich who recently explained would happen if Paul Ryan ever achieved a position of real power. “More than any other politician today, Paul Ryan exemplifies the Social Darwinism at the core of the today’s Republican Party.”

And what is Social Darwinism? It's a belief in the necessity of a struggle for survival where only the “fittest” survive. Here is how William Graham Sumner, the nineteenth century’s leading American spokesman for this outlook, put it: “Civilization has a simple choice. It is either liberty, inequality, survival of the fittest or not-liberty, equality, survival of the unfittest. The former carries society forward and favors all its best members; the latter carries society downwards and favors all its worst members.” This is may well be Paul Ryan’s version of the struggle between good and evil. By the way, liberty here is defined as the freedom of individuals to pursue wealth in an unfettered way.

Following this ideology, a Mitt Romney presidency, with Ryan as VP, would most likely increase the pace of deregulation and destroy what is left of the country’s safety nets. It would ultimately devastate the middle class, greatly increase the ranks of the poor and unemployed, do away with union rights, and reserve prosperity for the upper class alone. All of this will be done in the name of the liberty. And, it will be guided by an ideological paradigm that has already been proven throughout history to be disastrous.

We can speculate about popular reaction to these policies as time goes on. There will probably be eventual demonstrations in the streets. Those in power will respond with red-baiting tactics and repression against the protesting victims of their policies. But, if the electoral system works, those responsible should be cast out of office in four to eight years.

All in all it is a pretty grim picture. It was George Santayana, a philosopher with both Spanish and American roots who said that “those who cannot remember the past are condemned to repeat it.” We in the United States, so thoroughly attached to our local here and now, are certainly candidates for this fate.