Eric Laursen is an independent journalist and the author of "The People's Pension: The Struggle to Defend Social Security Since Reagan" (AK Press, 2012) and co-author of "Understanding the Crash" (Soft Skull/Counterpoint, 2010). 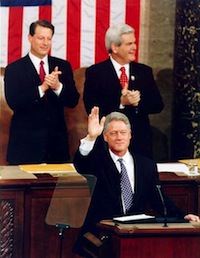 After Bill Clinton was reelected president in 1996, he was looking for a domestic-policy issue that would cement his legacy and seal his comeback against a conservative Republican leadership in Congress. The issue he settled on was Social Security. Encouraged by the unexpected shrinkage of the federal budget deficit soon after his second inauguration, he quickly negotiated a bipartisan Balanced Budget Act that aimed to eliminate deficits entirely by 2002.

Restructuring Social Security would be the next, equally bipartisan step. At a now-celebrated secret meeting between Clinton and Newt Gingrich on October 28, the president and the House Speaker agreed to collaborate on a plan that Clinton would then introduce in his January State of the Union speech.

We've long known what happened next, in outline: The scandal over the president's alleged “sexual relationship” with a former aide, Monica Lewinsky, blew up in January. Amidst the controversy of the Starr commission's investigation, the president, a centrist through and through, was forced to fall back on the support of his party's left-progressive wing and abandon bipartisanship. In December, Clinton was impeached. Desultory efforts to keep working with Congress on Social Security continued into 1999, but with scandal and impeachment consuming Washington, the effort was for naught.

The conventional wisdom is that Lewinsky and her “simple blue dress” saved Social Security -- or, depending upon your point of view, prevented it from being reined in and reformed. But there's another facet of the story that's not been fully told until now, and that suggests otherwise. It also sheds light on the intensity with which presidents, both Republican and Democrat, have sought to leave their imprint on Social Security -- and the political risks they've run trying to tackle the “third rail” of American politics.

The key figures in the negotiations that began shortly after Clinton and Gingrich's secret summit were Gene Sperling, the president's chief economic advisor, and Ken Kies, a Republican tax lawyer. White House chief of staff Erskine Bowles was also an important cheerleader for the Social Security negotiations, and Rep. Bill Archer, the Texan who chaired the powerful House Ways and Means Committee, was also deeply involved on the Republican side. Bowles and Gingrich later remembered thinking the same thing after the Lewinsky scandal broke open: that it was over. The chances of a deal were dashed.

But Kies remembers differently. As he told me when I was researching my book, The People's Pension: The Struggle to Defend Social Security Since Reagan, the secret talks continued without missing a beat. They even expanded, to include outreach to members of Congress such as Democratic Sen. Bob Kerrey of Nebraska and even officials in the mutual fund industry. Clinton’s advisors pursued more public discussions with lawmakers about a Social Security deal as well. Keeping all options open, Clinton’s advisors told some reporters the president hadn't rejected partially privatizing the program by carving private investment accounts out of workers' payroll tax contributions.

By early December 1998 -- shortly before Clinton's impeachment -- Sperling and Kies had come very close to a deal. Later dubbed by Kies the Social Security Guarantee Plan, the proposal called for setting up mandatory private savings accounts for every American worker. The federal government would fund these accounts with annual contributions equal to 2 percent of the wage base used to compute old-age and survivors' benefits under Social Security. Workers’ payroll tax contributions would continue to go into Social Security as before; there would be no “carve-outs” to fund the private accounts. When the worker was ready to retire, the Social Security Administration would calculate a monthly stream of payments based on the balance in her account. If the amount was less than her expected benefit under traditional Social Security, the program would make up the difference. If the amount exceeded her entitlement, she could keep the extra for herself.

Kies says the proposal reflected a fundamental point of agreement between Clinton, Gingrich, and Archer that the only way to “save” Social Security for the long run without resorting to the politically difficult “four uglies” -- raising payroll taxes, cutting benefits, means-testing benefits for higher earners, or raising the retirement age -- would be to increase the yield on the program’s assets. Instead of paying for benefits entirely through payroll taxes and interest on the Social Security trust fund assets, the federal government would be shifting much of the burden to general revenues, in the form of contributions to the private accounts. According to one actuarial estimate, Kies says the Guarantee Plan would have saved the government $22 trillion in real dollars over 75 years -- sufficient for lawmakers to consider lowering payroll taxes.

Gingrich, for one, was enchanted. The Speaker talked up the secret deal with some of his Republican colleagues, and even had laminated cards printed up to help sell it to them. Under the deal the Speaker was working on, the cards said, the following were all true: everyone would get their promised Social Security benefits; nobody would have their taxes raised; and everyone would have the opportunity to earn some upside on their personal accounts. The prospect seemed almost too good to be true.

Which, indeed, it was. Despite the absence of carve-outs, a study released the following year by the Center on Budget and Policy Priorities, after the plan became public, found that it suffered from many of the same deficiencies as outright privatization. First, there were transition costs -- the massive borrowing needed to fund the private accounts. This would cost the Treasury some $300 billion to $600 billion a year from 2016 to 2042. That would put a major strain on the federal budget, causing deficits already projected to reappear during that period to balloon.

Coincidentally, the 2 percent of the wage base that would fund the accounts was just a shade less than Social Security’s projected seventy-five-year shortfall of 2.07%. If solvency was the concern, why not simply transfer the sums to the trust funds instead? The accounts might not be the windfall their proponents expected, either. Investment providers would be able to charge their administrative and marketing costs against the assets, pocketing some $34 billion a year by 2030 and more thereafter. Only affluent households would likely enjoy much upside from the accounts, according to the CBPP, since only they would accumulate enough assets to exceed their projected income from Social Security. That in turn would undermine better-off Americans’ support for Social Security, since their entire contribution to the program would, effectively, be used to fund other people’s benefits.

Yet Kies recalls no pushback from White House negotiators in “detailed” talks about the Guarantee Plan in fall 1998. Mostly, they focused on the details. The administration wanted to add a Social Security benefit enhancement for lower-wage workers to the package, while Gingrich and the Republicans wanted retirees to be able to pass on any unused private-account assets to their heirs. But both sides believed they had a window of opportunity, says Kies, and felt they had a workable formula to seize it.

By this time, however, the political atmosphere in Washington was dramatically different. The House impeachment hearings were moving relentlessly forward. The New Century Alliance for Social Security, a coalition of progressive groups including the AFL-CIO, National Council of Senior Citizens, NAACP, National Organization for Women, and Rev. Jesse Jackson’s Rainbow/PUSH Coalition, had come together to oppose any deal that would endanger the program. At the alliance's founding event, Jackson, then counseling the president about his crisis, blasted privatization, calling it “a bogus solution to an inflated crisis,” concocted by a group of “hucksters” out to dismantle Social Security for their own profit. “We don’t ask arsonists to help fight fires. We don’t ask the fox to help design the chicken coop.”

Clinton, now facing the possible forced end of his presidency, couldn't continue to pursue the Social Security Guarantee Plan without risking a revolt by the wing of his party who he'd treated most cavalierly thus far -- but who were now essential to his survival. Without breaking off communication with Archer and other congressional Republicans, Sperling led a group of Clinton aides, with heavy input from Treasury Secretary Robert Rubin, in developing an alternative Social Security plan that the president would introduce in his January 1999 State of the Union address.

This new plan was quite different from the one Sperling and Kies had concocted. There would be private accounts, but they would be voluntary, and funded by workers' contributions and matching government grants wholly separate from Social Security. But the heart of the president's plan was a proposal to turn over about 62 percent of the anticipated federal budget surplus, or some $2.7 trillion, to the Social Security trust funds. Treasury would use the proceeds to pay down the federal debt. Theoretically, that would keep interest rates low, making benefits easier to fund once the baby boomer wave of retirements began. The rest of the surplus, about $650 billion, would be invested in the stock market, where Clinton estimated it would earn an average annual return of 6.75 percent, versus 3 percent for the Treasury bonds.

The president's proposal was essentially dead on arrival, derailed by Federal Reserve Chair Alan Greenspan, who warned that the investment portfolio that Social Security would then own couldn't be kept free of “political pressures.” But when Archer and his colleague from Florida, Rep. Clay Shaw, introduced a Social Security bill similar to the Guarantee Plan, it too was rejected by House Republicans -- although Archer recalls that the president privately encouraged them to pursue it.

Thus died what was likely the most serious, high-level attempt since the program began to forge a bipartisan deal to fundamentally restructure Social Security. To kill it required not just the eruption of the president's sexual scandal, but the immediate threat of impeachment almost a year later, coupled with enormous pressure from progressive Democrats and organized labor.

Not that the Guarantee Plan was the only such attempt. In fact, every president since Jimmy Carter -- Democrat as well as Republican -- has at one time or another contemplated an attempt to make major cuts in Social Social Security, under the headline of either cutting the federal deficit or “saving” the program from “bankruptcy.” The most recent was the failed effort during summer 2011 by Obama and House Speaker John Boehner to conclude a tax-and-spending deal that would have included cutting the formula used to compute Social Security benefits for new retirees.

Invariably, the partners in these attempted deals are conservative Republicans and center-right Democrats, with Democratic progressives generally excluded from the discussion. Just about invariably, too, the reason for failure is similar: another rightward lurch by the Republican Party. Had the GOP House leadership not decided to use the Lewinsky scandal as leverage to bring down Clinton, perhaps the Guarantee Plan would have had a chance to build support. Had George W. Bush, in 2005, not insisted on including private accounts in his attempt to orchestrate a Social Security restructuring, centrist Democrats might have met him halfway. Had Tea Party Republicans not stood in the way of any new tax revenue in last year's Boehner-Obama negotiations, they might have forced the first major reductions in Social Security in almost thirty years. Such conjunctions, along with determined progressive opposition to ending Social Security as we know it, are why the New Deal's signature creation is still with us today.