by Jeffrey B. Perry

Dr. Jeffrey B. Perry is an independent, working-class scholar and author of "Hubert Harrison: The Voice of Harlem Radicalism, 1883-1918" (Columbia University Press, 2008). He is also author of the introduction to "Theodore W. Allen's Class Struggle and the Origin of Racial Slavery: The Invention of the White Race" (1975; Center for the Study of Working Class Life, State University of New York, Stony Brook, 2006) and author of the introductions and supplemental appendices to the forthcoming new edition of Allen’s "The Invention of the White Race" (2 Vols., Verso 2012). 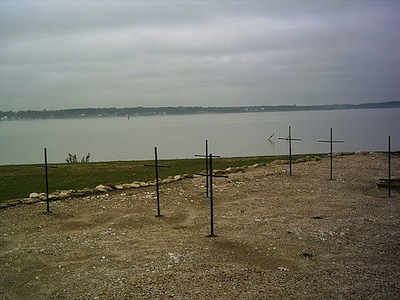 Graves dedicated to Jamestown settlers who died in 1607. Credit: Wikipedia

Sheryl Gay Stolberg's article in the New York Times on President Obama's  ancestor John Punch contains important inaccuracies. Ms. Stolberg wrote "In 1640, Mr. [John] Punch then an indentured servant, escaped from Virginia and went to Maryland. He was captured there and, along with two white servants who had also escaped, was put on trial.”

There is no basis for the claims that John Punch was "indentured" and that the other two servants were "white."

Ancestry.com (in the article Stolberg discusses) cites the following paragraph from the Journal of the Executive Council of Colonial Virginia, dated July 9, 1640, as “the only one surviving account that certainly pertains to John Punch’s life”:

Whereas Hugh Gwyn hath by order from this Board brought back from Maryland three servants formerly run away from the said Gwyn, the court doth therefore order that the said three servants shall receive the punishment of whipping and to have thirty stripes apiece one called Victor, a [D]utchman, the other a Scotchman called James Gregory, shall first serve out their times with their master according to their Indentures and one whole year apiece after the time of their service is Expired ... the third being a Negro named John Punch shall serve his said master and his assigns for the time of his natural Life here or elsewhere.

There is no indication in the 1640 document that John Punch was “indentured.” While the document specifically indicates that the other two “servants” James Gregory and Victor did have “Indentures,” it does not say this about Punch. There is no documentation that Punch signed an indenture (particularly not for transportation to Virginia) and it is extremely unlikely that he did. What is likely is that he was previously subjected to limited-term chattel bond-servitude (the passage makes reference to John Punch serving “his said master and his assigns”). Theodore W. Allen, in his seminal two-volume study The Invention of the White Race, shows in his second volume, The Origin of Racial Oppression in Anglo-America, shows that in Virginia chattelization was imposed on free laborers, tenants, and bond-servants increasingly after 1622, that it was imposed on both European and African descended laborers, that it was a qualitative break from English labor law, and that the chattelization of plantation labor constituted an essential precondition of the emergence of the subsequent lifetime chattel bond-servitude imposed on African American laborers in continental Anglo-America under the system of racial slavery and racial oppression.

Furthermore, the other two servants captured with John Punch were not “white” and were not described as such. The 1640 record says only they were “Victor, a [D]utchman” and “a Scotchman called James Gregory.” In his first volume, Racial Oppression and Social Control, Allen emphasizes there were no “white” people in Virginia at that time and he explains that after examination of 885 county-years of pattern-setting Virginia’s colonial records, he found no instance of the official use of the word “white” as a token of social status prior to 1691. This was not merely a matter of semantics; he also found that the “white race” as we know it was not, and could not have been, functioning in early Virginia.

It is important to understand that through much of the seventeenth century there was a commonality of experience between European and African descended laboring people in Virginia who fought together, ran away together, made love together, and, in general, resisted their oppression together. When economic hard times worsened after 1660 there were numerous examples of militant labor solidarity culminating in the later, civil war stages of Bacon’s Rebellion (1676-77), in which European and African descended chattel bond-laborers fought together demanding their freedom from bondage.

Allen insightfully explains how in the wake of Bacon’s Rebellion the “white race” was invented as a ruling class social control formation in response to such labor solidarity; how a system of racial privileges was deliberately instituted as a conscious ruling-class policy in order to define and establish the “white race”; how a system of “racial slavery” was imposed that was also marked by severe racial proscriptions against free people of African descent; and how the consequence was not only ruinous to the interests of the African-American workers and other direct victims of racial oppression, it was also disastrous for “white” workers.

As people organize to protest the growing hard times today it is most important to accurately learn our seventeenth-century history and whose class interests are served by white supremacist appeals.

On Other Websites
comments powered by Disqus