“My Head on a Platter to the Archivist of the United States”: How Tim Naftali was Almost Sacked as Head of the Nixon Library

A year after he joined his federal bosses in opening a comprehensive exhibit about Watergate at the Nixon Presidential Library on March 31, 2011, Timothy Naftali spoke about "Watergate in Nixonland.” A handful of people, I among them, already knew the story the former director of the Nixon Presidential Library vividly shared at the Miller Center on April 30, 2012. As a historian and former Nixon tapes archivist, I fought hard to ensure that Tim Naftali succeeded. He completed the federal mission of my archival cohort.

There were some clues at the March 31, 2011 Watergate exhibit opening as to what Tim endured in federal service. As the National Archives’ video shows, Naftali then thanked Archivist of the United States (AOTUS) David S. Ferriero for standing up to immense external pressure.

Tim Naftali is pictured with David Ferriero in a National Archives and Records Administration (NARA) photo taken on June 29, 2011. I am standing between them. Over time, some of Naftali’s story has been revealed to the public. As a former federal specialist in Nixonian “abuses of governmental power,” Tim and I share close bonds. 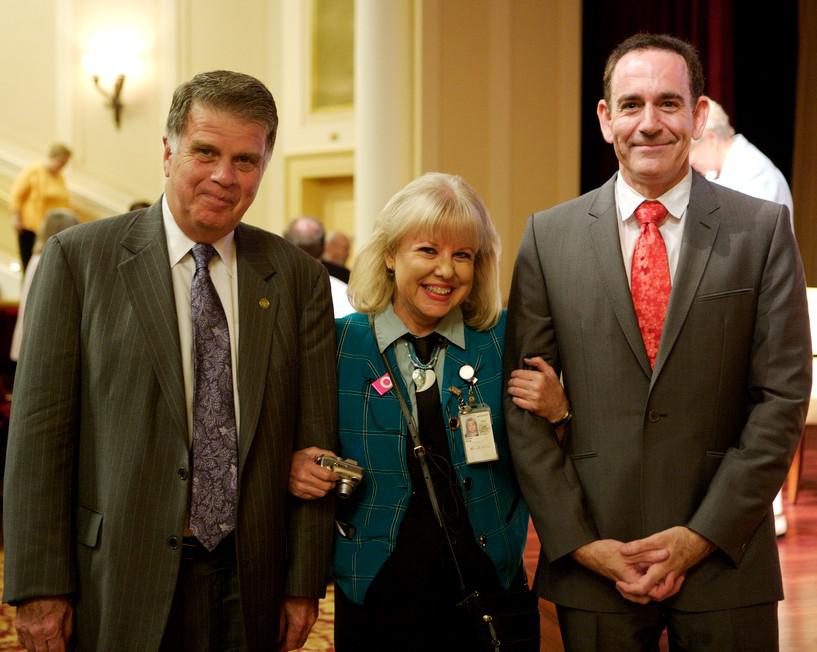 Tim Naftali voiced pro forma thanks at the March 31, 2011 exhibit opening to his first-line boss, Assistant Archivist for Presidential Libraries, Sharon Fawcett. But Tim’s voice broke as he thanked former Nixon chief of staff John H. Taylor for his support. I knew why. I worked in tandem with Taylor to help ensure that Naftali’s exhibit went up as it did. Naftali had to walk a difficult path but as Taylor recently observed, Tim proved to be “tough as hell.”

Tim Naftali revealed at the Miller Center what I have known for nearly two years. There was an effort in June 2010 by officials below the agency head level at the National Archives to get him to resign before his exhibit went up.

The National Archives faced external pressure on Naftali prior to 2010. On December 14, 2011, Christopher Goffard reported in the Los Angeles Times that “some ‘alumni’ from the Nixon White House approached Sen. Lamar Alexander (R-Tenn.) to place a hold on the 2009 Senate confirmation of David S. Ferriero as archivist of the United States.”

I’ve known but kept silent about that Washington maneuver since soon after it occurred. The hold on Ferriero’s nomination first was reported by Goffard in his December 14, 2011 article “At Nixon Library, the old game of hardball against a new view of Watergate.” Goffard quoted a Nixon representative as saying it was intended as a “signal to the archives” to get Naftali to “straighten up and fly right."

Prior to Ferriero’s reorganization of the National Archives early in 2011, Naftali reported to Fawcett, a veteran NARA employee with over 40 years of federal service. In August 2010, Fawcett received from the private Nixon Foundation a lengthy list of objections to Naftali’s Watergate exhibit. She heard repeated complaints from Foundation officials about Naftali between 2007 and her retirement in 2011.

The Nixon side did not hide how it felt about Tim Naftali as he worked to put up a Watergate exhibit. As I observed in an essay for HNN in 2010, Bob Bostock, an official associated with the Nixon Foundation, asked if there wasn’t an Alger Hiss library Naftali could head instead of a Nixon Presidential Library.

There was pressure on Tim internally, as well. In June 2010, Fawcett and Duke Blackwood, director of the Reagan Library, met Naftali for drinks. As Naftali revealed in his Miller Center presentation, he was offered a proposal that surprised him.

If I would resign, I would get my [Watergate] exhibit....They wanted to give my head to the archivist of the United States on a platter...maybe the Nixonians would stop pushing. I thought this was outrageous...[They said,] "Tim, this is the only way your Watergate exhibit is going to happen. You've got to resign."...I didn't, of course.

Naftali described in his Miller Center presentation a NARA internal review panel’s consideration of the objections raised to his exhibit by the Nixon Foundation. Tim implied in his talk that the review panel leaned towards accepting some of the Nixon side’s objections, such as removal of references to Fred Malek’s 1971 “Jew counting” at the Bureau of Labor Statistics at Nixon’s request.

An article in The Nation in June 2010 reported the existence of the internal NARA review panel, but noted that David Ferriero would make the final decision on the exhibit. The exhibit went up as Naftali had prepared it.

Naftali observed in April 2012 that he prevailed in his efforts to put up a historically credible exhibit about Watergate but that it was “a near thing.” He warned his listeners that public history is fragile.

There was near silence in the historical and archival blogosphere on the Watergate exhibit. But my discussions in 2010 of the National Archives’ history in an archivists’ forum caught the eye of the agency head

Thanks for your comments about my latest blog post. Thanks, especially, for the John Taylor history. Have heard lots about him and will now make an effort to reach out to him. Still on a steep learning curve regarding NARA's history!

Ferriero is unafraid of continual learning. Indeed, David has listed it as a quality he looks for in federal hires for the National Archives.

Despite two major articles in the New York Times that spelled out what was at stake before and after the Watergate exhibit opened, academic researchers stayed on the sidelines. Even a November 2011 Miller-McCune article about Naftali’s difficult journey in federal service drew no attention in the historical blogosphere.

Historians need to step up their game. They need to embrace continual learning and educate themselves about the National Archives and what it faces in Washington. As it is, there is what Naftali calls an intensity gap. The Nixon side showed intense interest in the Watergate exhibit and used various means in an unsuccessful effort to limit it.

This time around, knowledgeable Washington insiders such as I had Tim’s back. Who will fight for the next Tim Naftali, if complacency among historians on presidential libraries issues continues?