Occupy Wall Street Should Remember that No One Liked Vietnam Protesters, Either

Simon Hall is a Senior Lecturer in American History at the University of Leeds, United Kingdom. His latest book, "Rethinking the American Anti-War Movement," has just been published by Routledge. 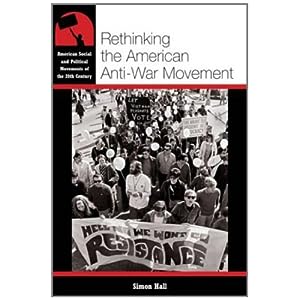 The protests against the Vietnam War were controversial from the start.  As the conflict raged, critics accused antiwar activists of undermining the morale of American troops and risking the international humiliation of the United States.  In turn, many peace protesters responded that they were seeking to end an immoral and unnecessary conflict that represented a stain on America’s reputation.  In the decades since the fall of Saigon the scholarly argument about the movement has been similarly robust.  While some historians have celebrated its role in restricting, de-escalating and finally ending the war, others have claimed that the movement’s unpopularity (fuelled by its perceived anti-American and countercultural tendencies), actually helped to prolong the conflict by discouraging more mainstream dissent.

Part of the problem is that we simply cannot know how things would have turned out had there been no teach-ins, marches, protests, and draft card burnings.  Furthermore, there is an understandable temptation to believe that the sustained antiwar activism undertaken by millions of Americans over a number of years must have had some sort of effect.  Finally, it is incredibly difficult—if not impossible—to disentangle the impact of this antiwar activity from wider military and political developments that shaped the course of the war.  One thing, though, seems pretty clear:  public opinion, at least as measured by opinion polls, was incredibly hostile toward the antiwar movement even as support for the war in Vietnam waned.  Indeed, the peace movement was one of the few things in the United States that was consistently more unpopular than the war itself.

At certain moments, the antiwar movement did affect policy decisions.  The massive moratorium protests of October 1969, for instance, encouraged the Nixon administration to postpone plans for an all-out military offensive against Hanoi.  But although antiwar dissent was consistently taken into consideration by policymakers, it was rarely the decisive factor.  LBJ’s desire to protect his Great Society and his fears about provoking a wider war, and Nixon’s commitment to détente, were surely more important to their respective war policies.  Moreover, the growing frequency of massive antiwar marches and demonstrations did not prevent ferocious military firepower from being unleashed on Southeast Asia well into the 1970s, nor did it prevent the expansion of the war into Laos and Cambodia.  Indeed, the eventual decision to extricate the U.S. military from Vietnam was shaped less by the actions of the antiwar movement than by the huge costs to the U.S. in blood and treasure, the impressive determination of the North Vietnamese and National Liberation Front to fight to the death for an independent, unified Vietnam, and the inability of America and her allies to secure victory.

While the antiwar movement may well have failed in its primary goal, this does not mean that it was unimportant.  In addition to helping inspire protests around the world (most notably in West Germany, France, Britain, Australia, and Japan) it exercised a powerful influence over other domestic social movements.  Antiwar veterans, for example, played prominent roles in the women’s rights and gay liberation movements of the late 1960s and early 1970s.  Moreover, these movements’ use of teach-ins, street theater and countercultural forms of protest, illustrate the antiwar movement’s sway.  The protests against the Vietnam War have also shaped more recent peace activism.  In their style, tactics, and arguments many of the demonstrations against the Iraq War were reminiscent of the peace protests that had taken place a generation before.  On March 30, 2003 the New York Times reported on the prominent role of  ‘60s veterans, including Pete Seeger, Tom Hayden, Joan Baez, and Rev. William Sloane Coffin, in the protests against the U.S. invasion of Iraq.

Historians have tended to explain the antiwar movement’s impact on the emergence of the New Right in terms of the ‘backlash’:  conservatives, it is said, drew strength by denouncing the antiwar movement and those sympathetic to it.  True enough, but there was a more positive influence too.  Indeed, during the 1970s a number of grassroots conservative activists took inspiration from the antiwar movement.  In Boston, for example, opponents of busing invoked earlier antiwar activism in an effort to legitimize their own street protests and civil disobedience.  They were also affected by the style of the antiwar protesters.  In September 1975, in an echo of the Berkeley activists who had lain in front of troop trains, anti-busing protesters lay down in front oftrucks that were distributing the allegedly pro-busing Boston Globe.  The antiwar slogan, “Hell, no! We won’t go”, was also adapted by anti-busing activists in South Boston who chanted “Hell, no! Southie Won’t Go.”  The antiwar movement exercised a profound influence over the anti-abortion movement too.  As the historian Richard L. Hughes has pointed out recently, a number of the movement’s pioneers were themselves veterans of the struggle against the Vietnam War, and much of the anti-abortion movement’s early style was reminiscent of peace protests.  At one anti-abortion rally, activists even sang a version of John Lennon’s Give Peace a Chance.  Furthermore, anti-abortion campaigners drew heavily on the antiwar movement’s symbolic concern with motherhood and the child casualties of the war.  Whereas antiwar activists had carried pictures of killed or maimed Vietnamese children, opponents of abortion took to displaying images of aborted fetuses in an attempt to shock the public into re-evaluating their stance.

Beginning in the early 1960s, Americans organized to protest against the war in Vietnam.  Ultimately they created a vibrant antiwar movement that remained active for the best part of a decade.  Millions of ordinary people, including students, housewives, lawyers, clerks, government employees, factory workers, and veterans engaged in an extraordinary range of activities—from mass marches to rallies, petition drives to local referenda, and draft card burnings to street—in an effort to bring the war to an end.  While it is quite possible that the movement played, at best, only a marginal role in the American government’s decision to end its military involvement in South Vietnam, its widespread influence on subsequent protest movements from across the political spectrum stands as a powerful, if unintended, legacy.