Blogs > Stone Age Brain | Rick Shenkman > Should We Be Scared of Rightwing Populism?

Should We Be Scared of Rightwing Populism? 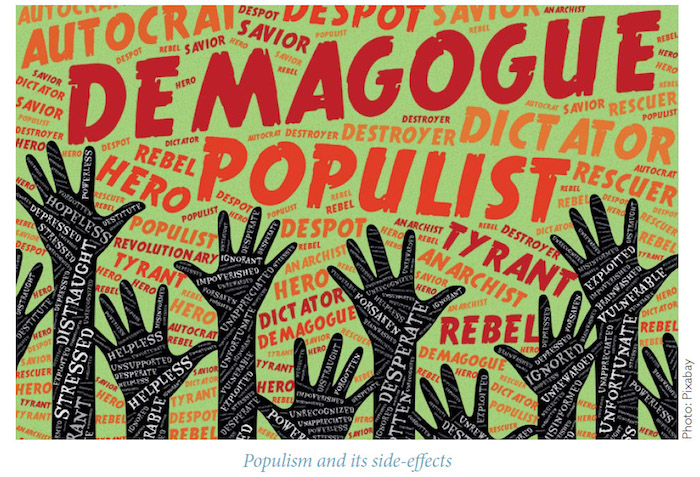 Stone Age Brain is the blog of Rick Shenkman, the founding editor of the History News Network. His newest book is Political Animals: How Our Stone-Age Brain Gets in the Way of Smart Politics (Basic Books, January 2016).

This is excerpted from "Should We Be Scared?" published in Horizons, the magazine of the Center for International Relations and Sustainable Development. The excerpt has been edited.

One of the only pleasant results of the election of right-wing populists around the world is that the study of democracy is once again drawing the kind of attention the subject deserves. We may in fact be in the midst of what future generations will regard as a golden age in democracy studies.

Yale’s Timothy Snyder, known for his Holocaust research, has given us On Tyranny: Twenty Lessons from the Twentieth Century (2017): a rather frightening book that suggests the authoritarianism we associate with the 1930s is making a comeback. Harvard’s Steven Levitsky and Daniel Ziblatt have provided us in How Democracies Die(2018) with a handy list of the red flags of authoritarianism—of which, they say, there are many at present in multiple countries that formerly boasted robust democracies. And the most alarmist of all scholars working on these issues, Shawn Rosenberg of the University of California (Irvine), is working on a book that claims democracy is devouring itself.

Should we believe these prophets of doom?

This question, alas, is not one we can answer definitively. The problem, as William College political scientist George E. Marcus likes to remind me, is that none of us was given the gift of prophecy. While the neuroscientists have been busy explaining that the human brain is basically a predicting machine, in point of fact we are not very good at it.

Take almost any major event of the last two centuries. On the eve of the U.S. Civil War, Americans were convinced, by and large, that if fighting broke out the conflict would be short. At the Battle of Bull Run (the first major battle in the war) pro-Union men and women in elegant clothes came out in their carriages to watch the soldiers battle it out thinking they were going to be treated to an entertaining spectacle that would end in victory. Their side lost and the war went on for four long years.

None of the powers on either side in World War I realized that the assassination of Archduke Franz Ferdinand constituted the first act in a tragedy that would end in the death of millions: Stanford University historian Niall Ferguson tells us that investors in the New York Stock Exchange blithely ignored the news of the onset of the war for weeks.

On the eve of the greatest war in history Neville Chamberlain announced to his countrymen that peace was at hand. As he held aloft a paper signed by Hitler he said he had brought back “peace for our time.” Within months German panzers began rolling through Poland.

Social scientists have been very clear that evolution favored people who are on the lookout for danger. Those who were good at detecting threats were likelier to mate and produce issue. Scientists call the natural ability to spot danger an evolutionary advantage. But it is one thing to be able to see a red flag in the African savanna when you are living amidst a small group of hunter-gatherers and quite another when you find yourself in twenty-first century London, Budapest, or Washington, DC.

Indeed, the red flags have changed. On the savanna you had to worry about strangers outside your tribe. In the modern world we encounter strangers all the time to little effect. But our evolutionary history nonetheless makes us wary of strangers and, under certain circumstances, downright paranoid about them. This is why there is always an appetite in times of rapid migration for the fear-mongering rhetoric of demagogues whipping up hatred for immigrants. In this century as in the last, one can find millions dining out on it.

How are we to make sense of the world then? Borrowing from a neat taxonomy devised by Isaiah Berlin, University of Pennsylvania psychologist Philip E. Tetlock says pundits generally divide rather neatly into two kinds of fortune tellers: hedgehogs and foxes. Hedgehogs, as the Greeks put it, know one big thing (think:  Marxists).  Foxes know many things. The hedgehogs, in other words, are generalists; the foxes are specialists. In a series of experiments that lasted decades, Tetlock showed that the hedgehogs performed badly at prognostication. While their ideological orientation gave them a convenient lens through which to view world events, their telescope often proved flawed. The foxes generally did better—at least when focusing on subjects in which they had expertise. Still, few performed well enough to be regarded as clairvoyant.

Ah, but some did. This was a revelation. It turned out that there is a category of people—whom Tetlock has dubbed “superforecasters”—who can in fact predict future events rather well, at least when considering events a year or so out.

Their secret? They are numerate, open-minded, critical of unspoken assumptions, and alert to their own biases. They dig into research with zest and are careful in their assessments. As Nobel prize-winning psychologist Daniel Kahneman teaches, they make sure when beginning their research to establish the base rate for whatever it is they are investigating.

If, say (to take a really simple example), one is trying to establish the likelihood of a corner store being robbed in the next year in a particular city, one would be wise to find out how many stores in the neighborhood had been robbed in the past few years. This would give one a basis for prediction. If none had been robbed, one could guess that probably the particular store under observation was unlikely to face the prospect of a robbery. To be sure, as Nassim Nicholas Taleb warns in his best-selling book The Black Swan (2007), there are always black swan events one cannot predict. Perhaps as a result of a breakout from the local jail, thieves are let loose and robberies became rife the corner store might be in trouble. But if one is really careful, one can indeed, more or less, predict the future.

Which brings us back to our prophets of doom. Should we listen to them? Are they superforecasters or just super pessimistic? ...