Curing Ourselves with Fred Rogers 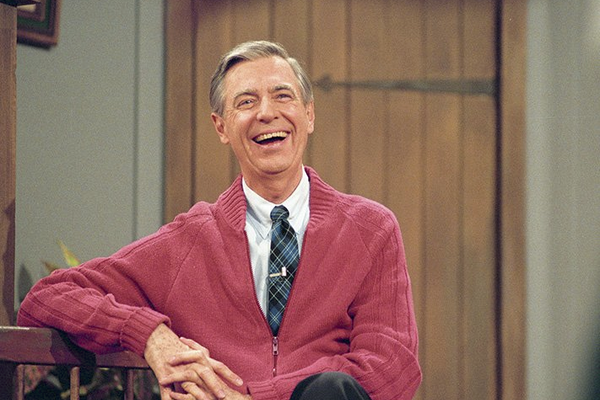 I find it hard not to be upset all the time about American politics, and the American society underneath. For me, things have been getting worse for a long time. Often, I find out that things had been even worse than I thought earlier, but I didn’t know the facts until they were uncovered by some journalist prying into our secretive government. The good news that honest investigations can reveal what powerful people want to keep secret doesn’t quite outweigh the bad news that these investigations reveal.

I don’t mean that I am upset all the time. At many times every day, I rejoice at my grandchildren and the children who are raising them, I root for some team on TV, I puzzle over a murder mystery, I accomplish do-it-yourself things all around our old house trying to recapture the past, or I kneel in the gardens pulling up weeds. Thoughts about America as a nation are swamped by the joys of one person’s everyday life.

But when those thoughts peek through, or take up all the air when we watch the news at night, they are unhappy ones. In the 15 years I have been writing columns about politics, I have identified all the big problems we face now. The names have changed, but the political ideas and underhanded methods persist. What is new is that those problems all seem more upsetting to me lately. I can identify when this condition began four years ago, as Trump came down the escalator to announce that he was campaigning for President.

I think the diagnosis is evident: I suffer from T.I.A.D., Trump-Induced Anxiety Disorder. There may be some help; please see this video for the wonder drug Impeachara.

Even if the drug doesn’t work, or exist, just thinking about it provides some temporary relief.

I think a longer-lasting cure may be available, one that’s been in front of us all the time. Liz and I joined lots of local baby boomers to see “It’s a Beautiful Day in the Neighborhood”. Fred Rogers was news to me. I had never watched his program and I only knew of his reputation, not him.

All the evidence I can find says that Mr. Rogers was just as he was portrayed by Tom Hanks: a lover and inspired teacher of children; impossibly nice to everyone around him; willing to talk to children about the most difficult subjects, like divorce and nuclear war; clever but transparent about using television to spread his message of love and tolerance.

Less well known is that he was a determined advocate for public television, was an ordained Presbyterian minister, and that he wrote all the songs for Mr. Roger’s Neighborhood. However far you dig into Fred Roger’s life, he was a remarkably good man who spread goodness all around him.

Instead of stressing about Trump’s latest idiocy or the decline of American politics, about which we can do very little, we could try to emulate Mr. Rogers. We could see the world as an opportunity to make a difference in people’s lives and devote our energies to doing that.

I’m no Fred Rogers. Coming from New York, I could never talk that slowly. The rest of us are just not so good so much of the time. But that doesn’t matter. We can all inch our way toward goodness by thinking more about the real people right in front of us and less about the personalities we see on the screen and the news we get from people we don’t know.

That is really the message of my whole collection of articles. The way to take back our lives is to focus more on the immediate, to practice the principles we believe in, to wrest more control by being intentional whenever we can.

Mr. Rogers can’t save us, even though Esquire did put him on the cover of an issue about heroes. He wasn’t trying to save the world himself. He was doing his part as less than a billionth of humanity. If we want to be cured of T.I.A.D. without danger of remission, we all have to do our parts, for our own lives and for others.