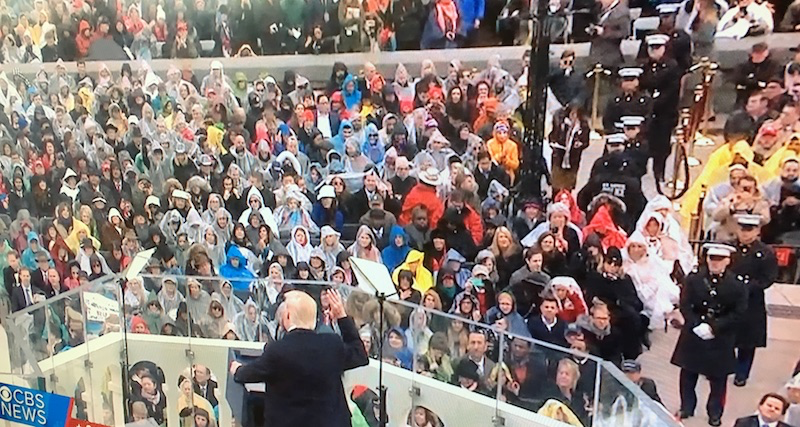 Gil Troy is a professor of history at McGill University and a visiting scholar in Governance Studies at the Brookings Institution for the fall of 2015. His latest book — his tenth — is The Age of Clinton: America in the 1990s (Thomas Dunne Books, 2015).

Seventy-two days of cry-ins and bellyaching is enough. Today, on Inauguration Day, Democrats should remember the civics lectures they gave Donald Trump about accepting election results when they expected to would win, and stop moping. By agreeing to attend Trump’s inauguration, Bill and Hillary Clinton are validating America’s peaceful transfer of power, without endorsing the victor. Anti-Trump diehards should acknowledge reality too. Boycotting the Trump presidency increasingly seems juvenile, undermining Democratic credibility. It’s time to oppose particular Trump actions, policies, appointments, and statements surgically not categorically – and accept him as President.

Since Election Day, millions of disappointed Democrats have languished in the first four of Elisabeth Kubler-Ross’s five stages of mourning: denial, anger, bargaining, and depression. Few seem to have reached “acceptance.” Democrats have a republican obligation to recognize Trump as head of state. At the same time, all Americans enjoy the democratic rights to oppose any moves he makes as head of government.

Yes, the words “President” and “Trump” are now become forever linked – get used to it. Some will continue resisting reality – I know a conservative politico who taught his son in 1998 to recite all the president’s names, from George Washington to George H.W. Bush, as if Bill Clinton hadn’t been inaugurated in 1993. But such antics are counterproductive. Democrats will gain credibility by choosing battles wisely, fighting policies not reality; offensive statements not Trump’s status.

This is not the first time Democrats have lost – or disappointed supporters insisted the wrong candidate won. Democratic despair, no matter how heartfelt or justified, is cliché. “The American people have elected a mere Tom Tit,” the professorial former president John Quincy Adams muttered in 1844 after the Democrat James Knox Polk upset the former Senator and Secretary of State Henry Clay. “I am unmanned,” New York’s Millard Fillmore wrote Clay when the Buffalo Congressman finally could put pen to paper after the election. “A cloud of gloom hangs over the future. May God save the country; for it is evident the people will not.”  More recently, in 1994, when the Democrats lost their Congressional majority after four decades, Mario Cuomo the refined governor of New York, who also lost that Election Day, blasted the Republican “storm troopers” conquering Washington.

America’s winner-take-all, two party system frames elections as binary choices between good and bad, qualified and unqualified, redeemer and destroyer. Every election becomes “the most important, ever,” with losers often doubting the people’s wisdom and America’s future. Even those appalled by Trump’s boorishness and bigotry should remember that the Constitution’s checks and balances limit presidential power – and have produced a stable system despite chief executives as mendacious as Richard Nixon and as mediocre as Warren Harding.

Ultimately, Democrats will recover by doing what Trump fails to do:  approach politics with some self-doubt while giving rival Americans the benefit of the doubt. The twentieth-century theologian Reinhold Niebuhr who, when inflamed, called some of  Dwight Eisenhower’s executive actions “stupid,” nevertheless preached that partisans would “be less affronted and baffled” by voters’ “clashing conclusions,” if they noticed that different citizens balance the values of “freedom” and “justice” differently. Understanding that this tension, applied to governing dilemmas, inevitably produces imperfect choices, should make us all less judgmental, Niebuhr taught. This humility echoed the skepticism of Ralph Waldo Emerson, America’s nineteenth-century philosopher of “fluxions and mobility.” “Why fancy that you have all the truth in your keeping?” Emerson asked. “There is much to say on all sides.”

In that spirit, beyond rejecting these infantile calls to shun Trump, perhaps Democrats can ban all Nazi and Ku Klux Klan analogies. Such language sounds unhinged and unpatriotic, dismissing the very voters Democrats must woo back to ensure happier Inauguration Days.

In 1940, after failing to block Franklin Roosevelt’s unprecedented third term “by only a few million votes,” the losing nominee Wendell Willkie explained how Republicans could function as “a vigorous, loyal and public-spirited opposition party.” Rejecting “the partisan error of opposing things just for the sake of opposition,” Willkie declared: “Ours must not be an opposition against—it must be an opposition for—an opposition for a strong America, a productive America.” As America inched toward war in 1941, Willkie didn’t hesitate to criticize Roosevelt harshly, for failing “in the most elementary task of management.” Nevertheless, Willkie affirmed that “in emergencies the President should lead.”

A decade later, the Senate Democratic leader applied Willkie’s lessons masterfully, despite being blown away by what he later called a “kind of a hurricane across the country” in 1952 that dislodged Democrats from the White House after twenty years. After January, 1953, Johnson explained that “If you’re in an airplane, and you’re flying somewhere, you don’t run up to the cockpit and attack the pilot. Mr. Eisenhower is the only President we’ve got.”

Believing “The American people are tired of wrecking crews,” seeking a “politics of responsibility” not partisanship, LBJ cooperated with Dwight Eisenhower when possible. Johnson supported Eisenhower’s foreign policy – with occasional dissents regarding the Korean War Armistice and Eisenhower’s fury against Israel in the 1956 Suez Crisis. On domestic matters, Johnson’s maneuvers often turned Eisenhower’s initiatives “New Deal-ish,” achieving the results he sought, bypassing futile fights with the popular president while appearing patriotic. Johnson’s approach helped him shift from being Minority leader to Majority leader in 1955; he is now remembered as one of America’s greatest parliamentarians.  Most important, back then most Americans respected Congress – today, only between 10 and 20 percent of Americans approve.

Blind obstructionism hurts Democrats more than it helps. Beyond the obvious hypocrisy in mimicking Republican tactics after eight years of denouncing them, gridlock advances the Republicans’ who-needs-government narrative, while undermining Democrats’ message. The party that has faith in government loses most when Americans lose faith in government.

Historically, most Americans have demanded bipartisan cooperation beyond Inauguration Day’s forced smiles. Most understand, as Michael Dukakis ultimately understood the “tough” 1988 election, that campaign insults are “politics, pure politics.” In 1981, even as partisan Democrats mourned Ronald Reagan’s win, many citizens demanded that Democratic House Speaker Tip O’Neill give the new Republican president a chance. Some citizens pushed bipartisan unity so aggressively thatworried aides wanted O’Neill flying on military jets rather than being besieged by demands at airports. Similarly, even though Bill Clinton’s 1993 inauguration had Rush Limbaugh fearing “the one-party dictatorial government that now will soon run America,” people shouted at Republican Senate Minority Leader Bob Dole as he jogged on Miami Beach, “Give him a chance, give him a chance.”

Democrats should show they are what Lyndon Johnson called “builders." Johnson proposed “holding your hand out while keeping your guard up, opening your lines of communication while keeping your powder dry.” Americans have no ritual to perform on Inauguration Day: we pledge allegiance to the flag not the president. But Congressional Democrats should fight strategically, rather than “resisting” wildly.

Donald Trump’s continuing combativeness hasn’t made it easy. Still, living through 2016 once was bad enough – it’s now over. The choice is not between bullying or being bullied. Oppose Trump’s capriciousness with Democratic steadfastness. A loyal opposition fights passionately, patriotically, effectively.