Blogs > There's No There There > Kent State: After 45 Years We Need a Serious Look at What happened and Why

Kent State: After 45 Years We Need a Serious Look at What happened and Why 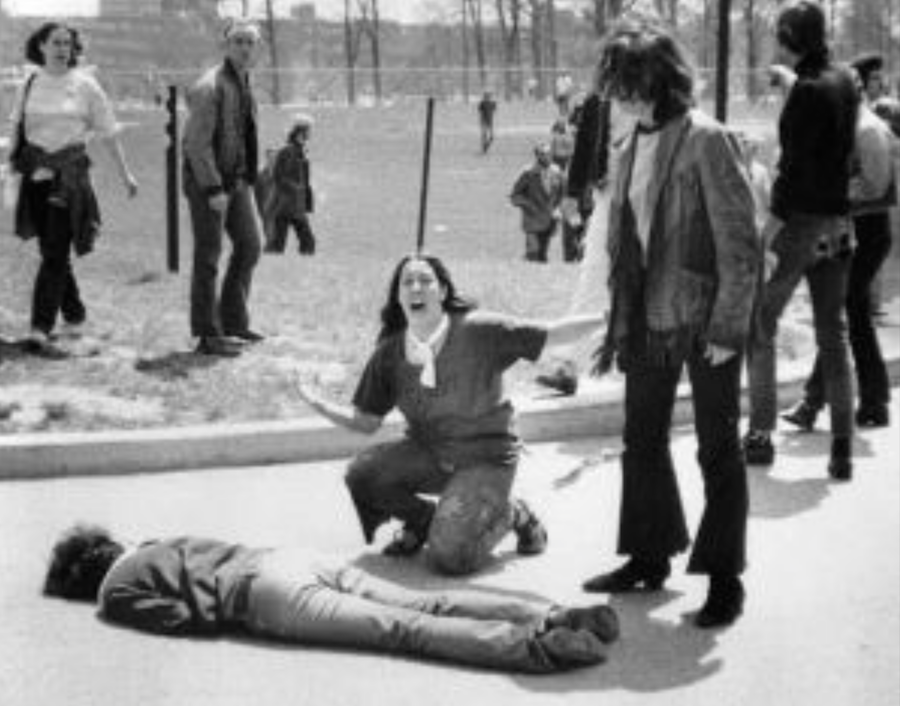 "Mary Ann Vecchio gestures and screams as she kneels by the body of a student, Jeffrey Miller, lying face down on the campus of Kent State University, in Kent, Ohio. On publication, the image was retouched to remove the fencepost above Vecchio's head." (Wikipedia)

It’s been 45 years since draft-deferred Ohio National Guardsmen aimed their M-1 rifles and .45 pistols at unarmed Ken State College students, killing four and wounding nine on May 4, 1970. You have to be well into middle age now to remember that day. My memory is stirred whenever I look at three photos: John Filo’s striking shot of teenager Mary Ann Vecchio on her knees weeping as she bends over student Jeffrey Miller’s body, a photo I took of Jeffrey’s grieving mother for a magazine my son Alex once edited, and a picture of two of the forever crippled in wheelchairs, KSU student Dean Kahler and wounded Marine Vietnam vet Ron Kovic of ‘Born on the Fourth of July” fame.

On the 41st anniversary of the shootings in 2011, the Cleveland Plain Dealer, the state’s largest newspaper, concluded, “There has never been a completely satisfactory explanation for why the Guard fired.” In fact, it went on, “The central unresolved question in the Kent State affair has been why several dozen Ohio Guardsmen pivoted in unison and fired” and for 13 agonizing seconds killed and wounded so many of their peers. The previous year the paper had reported the finding of an audio recording where a Guard office was said to shout, “All right, prepare to fire.” This led to an editorial urging the state to take another look “and give full account of that tragic day.”

“That tragic day” followed Nixon’s announcement that the U.S. had invaded Cambodia and expanded the war, causing antiwar college students throughout the nation to go on strike. It was a time when the President called antiwar students “bums” and Ohio’s Republican Governor James Rhodes, in a tight and ultimately losing race, described students against the war as “worse than brown shirts and the communist element and also night riders and vigilantes. They are the worst type of people that we harbor in America.”

A majority of blinkered Americans agreed. Apprehensive and uncertain, yearning for a return to an allegedly untroubled era before the tumultuous sixties, and manipulated all their lives to believe that only an “exceptional” America protected them against Communist and Asian hordes, they supported the shootings, as a  Gallup poll reported. Pat Moynihan thought May 4th amounted to a pro-war plebiscite, a prescient remark given that two years later Nixon overwhelmingly defeated George McGovern, an unflinching dove. And Milton Viorst, one of the sharpest pundits of those years, thought, “The 1960s ended in a small town in Ohio named Kent.”

After several trials, a presidential commission, and books galore, no one was ever held responsible despite a final settlement of a meager $674,000 distributed among the thirteen families. It did, however, lead to the development of the superb May 4th Collection at the KSU Library with its rich lode of material. One is Charles A. Thomas’s memoir. He had worked for the National Archives and was asked to examine films used by the Scranton (investigating) presidential commission. His finding: “it looked very much as if someone had doctored the evidence to minimize any impression of the Guard’s brutality and to plant the spurious notion that the soldiers had been confronted with a raging student mob,” a charge refuted by the Justice Department when it summarized the FBI’s  findings. There’s much more in the May 4th Collection.

It also includes the long-forgotten Scranton commission’s devastating verdict that, while liberally casting responsibility on all parties, something happened that should never have happened: “the indiscriminate firing of rifles into a crowd of students and the deaths that followed were unnecessary, unwarranted and inexcusable.” Period!

Still, the case is now deemed to be dead. Why? Who cares? Who remembers? Who wants to remember?

My own judgment is that while I know of no smoking gun or deathbed confession the “guilty” one (s) got away, the “guilty” being the person or persons who ordered the Guardsmen to open fire.  So many unanswered questions remain about Governor Rhodes’s close ties with the FBI, an armed FBI informer on campus, what if anything relevant college, local and state police discovered. And what role, if any, did VIPs in Washington’s uber-secret chambers play? Contemporary critics have regularly and repeatedly proposed many more questions.

Years after May 4, 1970, Caroline Arnold, a Kent resident, wrote a column for the Kent-Ravenna Record Courier in which she reminded her small-town readers that “Truth wasn’t murdered at Kent State. People were murdered, people were wounded, hurt, frightened and bewildered, and much damage was done across the community and university.”

For our national political elite unwilling to publicly confront those responsible for the slaughters of the pointless Vietnam and Iraq/Afghan wars, it may be too much to expect anyone to bother themselves with a piddling four deaths and nine wounded college kids.

Still, I have to ask if anyone in the White House on down has the audacity to call for a new investigation? Anyone?