Blogs > Knitting Clio at HNN > For Ebola, the Band Played On, and On, and On 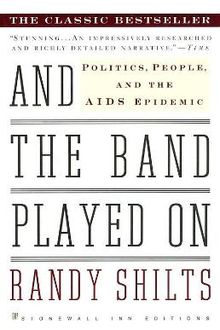 Heather Munro Prescott, Professor of History, Central Connecticut State University, is the author of "The Morning After: A History of Emergency Contraception in the United States" (Rutgers 2011).

At a recent meeting of the World Bank and International Monetary Fund, Centers for Disease Control (CDC) Director Tom Frieden likened the current Ebola outbreak to the early years of the AIDS epidemic.  "I've been working in public health for 30 years," said Friedan. "The only thing like this has been AIDS. And we have to work now so that this is not the world's next AIDS," Frieden said.

Since I’m a historian of medicine, I have been thinking the same thing as I’ve watched the Ebola epidemic unfold over the past few months.  I first read about the Ebola virus in journalist Randy Shilts’s book And the Band Played On: Politics, People, and the AIDS Epidemic (1987).  Although the book was meant to raise awareness about the AIDS crisis, it begins in 1976 with a “virulent outbreak of a horrifying new disease” in a town along the Ebola river on the Zaire-Sudan border, which “had demonstrated the dangers of primitive medicine and new viruses.” The outbreak started when a trader from a nearby village came to the teaching hospital for nurses in Maridi with fevers and profuse, uncontrollable bleeding. Within days 40 percent of their student nurses were infected.

Alarmed local leaders called the World Health Organization, who sent doctors from American Centers for Disease Control. By the time the CDC workers arrived, thirty-nine nurses and two doctors had died from what was now called Ebola hemorrhagic fever.  CDC doctors quickly isolated those with fevers and the epidemic was quickly contained.  Still the toll was high:  53% of those who contracted the disease died from it.  “Years later,” Shilts wrote, “a tenuous relief would fill the voices of doctors who talked of how fortunate it was for humankind that this new killer had awakened in this most remote corner of the world and been stamped out so quickly.  A site just a bit closer to regional crossroads could have released a horrible plague."

Ebola epidemics have occurred periodically in rural parts of West and Central Africa but until this year have been quickly contained.  In contrast, the current epidemic first emerged in a major urban area and spread rapidly before an effective containment strategy could be put in place. From there, it has spread to other heavily populated areas, and now, because of air travel, to the United States and Europe.  The fact that the virus has until now been confined to isolated rural areas explains, but does not excuse, why public health officials were caught off-guard.  As Shilts reminded us back in 1987, "With  modern roads and jet travel, no corner of the world was very remote anymore; never again could diseases linger undetected for centuries among a distant people without finding some route to fan out across the planet.”

Calls by Texas Governor Rick Perry and members of Congress to ban flights from countries in West Africa where the epidemic is raging, while understandable, also risk creating the kind of ignorance and xenophobia we saw during the early years of the AIDs epidemic.  In his book When Germs Travel: Six Major Epidemics that Have Invaded America and the Fears They Have Unleashed, Howard Markel observes that the discovery of AIDS among homosexuals, heroin users, Haitians, and Haitian immigrants living in New York and South Florida "helped to create a powerful association of sexuality, substance abuse, 'bad blood,' black skin, voodoo rituals, and prejudice." Haitian refugees who were HIV positive were held at "Confinement Camps" in Guantanamo Bay.  Although these refugees were eventually allowed to settle in the United States, discrimination against Haitians continued. Haitians in the U.S. were the only immigrant group that the FDA prohibited from donating blood, even though the percentage of Haitians infected with HIV was much lower than residents of San Francisco, New York, Boston, or San Juan, Puerto Rico. After nationwide protests by the Haitian immigrant community and their supporters, "the FDA formally removed Haitians from its list of banned blood donors."

We are already seeing this type of racism in the news coverage of the current Ebola epidemic.  For example, Andrea Tantaros of Fox warned that people who travel to the country and show symptoms of Ebola will "seek treatment from a witch doctor" instead of going to the hospital. Immigrants and visitors from Liberia, Guinea, and Sierra Leone are being shunned and asked to leave work out of fears they will spread disease, and Navarro College near Dallas is refusing to accept international students from countries with confirmed Ebola cases. Conservative radio hosts Rush Limbaugh and Michael Savage have even suggested that President Obama and other liberals deliberately want to spread Ebola in the United States as punishment for slavery. Randy Shilts died in 1994, but hopefully his message that prejudice is no way to fight a plague will live on.