Blogs > Iwan Morgan > The Great War and the Great Recession: The Frightening Parallels

The Great War and the Great Recession: The Frightening Parallels


by Iwan Morgan tags: WW I 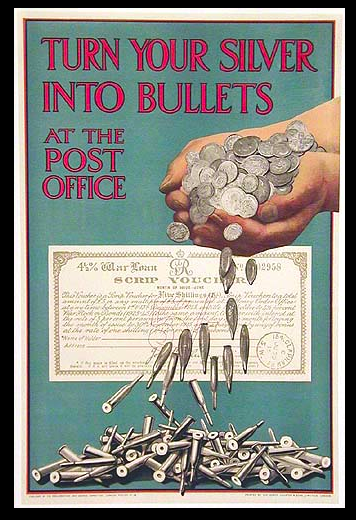 As European nations prepare to mark the centenary of the outbreak of the Great War, historical memory is almost entirely focused on the military events and political impact of the conflict. However, today’s rich nations could also profit from considering whether the massive and long-lasting economic dislocations of World War I offer a warning about the time it will take to achieve economic renewal in the wake of the so-called Great Recession of 2007-09. (For an excellent assessment, see Larry Elliott, ‘Great war proves rebirth after crisis takes time,’ The Guardian, 7 July 2014.)

When news of the assassination of Austrian Archduke Franz Ferdinand in Sarajevo on 28 June 1914 reached European capitals, financial markets were unperturbed at what was considered a local Balkan fracas. Within six weeks, however, almost the whole of Europe was engaged in a general conflict that revealed the systemic weaknesses of an international economic order whose stability and security had been considered assured. In many regards the Great War marked the end of the first age of globalization that had London and the gold standard at its center. Over the next 30 years, the gold standard unravelled, global trade declined amid a new era of protectionism, and immigration flows reduced – with the culmination of the downward spiral being the worst depression the world had ever experienced. Annual growth rates per person in the 12 biggest countries of Western Europe fell from 1.33 percent in 1870-1913 to 0.83 percent in 1913-1950.

This decline is particularly remarkable in view of the technological innovations of the era that acted as a boost to productivity – notably better transport (including automobiles and aviation), electrical goods, and speedier communications (radio, telephones). But these developments could not be fully exploited until the proper physical and financial infrastructure was in place, which did not happen until after World War II. The mixture of domestic Keynesian full employment policies and international financial reforms (the International Monetary Fund and the Bretton Woods system) did much to boost GDP growth per head in the twelve biggest Western European economies by 3.93 percent on annual average in 1950-1973.

Fast forward to the aftermath of the 2007-09 crisis to find what may be a premature optimism that the worst is over, rather like many in Western Europe thought in the 1920s after the Great War was over. One of the most positive assertions of this viewpoint is former Treasury Secretary Timothy Geithner’s memoir, Stress Test: Reflections on Financial Crises (Crown, 2014). This is meant to be a story of successful policy that managed to avoid a replay of the Great Depression. Yet can we talk of success when millions of people in the US and Western Europe have lost jobs, youth unemployment is appallingly high, and trillions of dollars’ worth of goods and services that could have been produced in healthy economies have been lost? True, things could have been much worse, but they could and should have been much better if the likes of Paul Krugman and Joseph Stiglitz are to be believed.

The great success of the US public policy response to the 2007-09 financial crisis was the rapid rescue at relatively little cost of the financial system. Thanks to the speed of action by government, the direct costs of bailing out banks and other financial institutions were remarkably low. The clean-up of the 1980s Savings and Loans crisis, which had little impact on the overall economy, cost taxpayers an estimated 5 percent of GDP; the clean-up from the worst financial crisis since the 1930s cost about a tenth of that.

However the swift recovery of banks and markets was not matched by a similar upturn in the real economy, particularly in the labor market. The Great Recession ‘officially’ ended in June 2009, but most Americans seem not to know that. In mid-March 2014, 57 percent of respondents in a NBC News/Wall Street Journal poll considered the economy still in recession. According to Paul Krugman, the disjunction between financial market and real economy recovery can best be explained if the financial crisis is seen as one manifestation of a broader problem of excessive debt – what he terms a ‘balance sheet recession.’ Because so many families had taken on debt to finance home purchase and consumption before the crash, they are now cutting back on credit-driven economic behavior. In other words the overhang of personal debt has kept the economy depressed for a long time.

Unlike a financial recession, a balance sheet recession cannot be cured through simple restoration of confidence. For Krugman, it can only be offset through concrete action in the form of fiscal stimulus and debt relief. Despite the American Recovery and Reinvestment Act of 2009, he believes that the US did too little of the former and almost none of the latter. As a consequence, the US economy has barely managed 1 percent average annual growth since the crisis, with the consequence that annual national income is around $1.7 trillion less than would have been the case had growth averaged 2.5 percent.

In a broader transatlantic context, there is a comparable sense that the economic tempest has blown out – the financial system is repaired, public debts are being reduced, and the Eurozone is saved. As a result, there has been less evidence of fundamental rethinking of the prevailing economic model than was the case after the first oil shock of 1973. For some pessimists, however – among them former UK Prime Minister Gordon Brown – the lack of action to tackle broader problems increases the danger of another and far worst economic crisis.

Warning voices have also been raised in the US that the events of 2007-08 marked an economic watershed that signalled the end of a period of phoney growth based on debt, overexploitation of the planet, and excessive reliance on technologies approaching obsolescence. Former Treasury Secretary Larry Summers has raised the spectre of an era of secular stagnation. Similarly, economic historian Robert Gordon is skeptical that IT-driven innovations will be as significant as those of the late nineteenth and early twentieth centuries in powering the international economy into a new era of productive prosperity. In a highly pessimistic estimate, he believes that US growth will steadily decline over the course of the current century to a low of 0.2 percent by 2100.

Of course, there are plenty of optimistic voices contending that the global economy will manifest its oft-proven capacity to recover and achieve even greater success. They do not write off the benefits of new technology as readily as Gordon. They place much confidence in the coming of a new age of cheap energy. And they believe that the pessimists are too focused on the travails of America and Western Europe to recognize the potential of Asia, Latin America, and Africa to help power a new era of global growth. One of the best recent statements of this school of thought is Gerard Lyons, The Consolations of Economics (Faber & Faber, 2014)

Whoever has the best of the debate ultimately - optimists or pessimists - the 1914-1945 years can offer some guide as to what might happen. The lessons from this era are twofold: first, renewal from the most recent economic crisis will likely be a slow, painful process; and, second, it will only be possible if the fundamental weaknesses of the current economic model are addressed. We today are living the truth of the first of these lessons but we are still a long way from understanding the second one.