Piketty’s Charge Against the Ramparts of the Right 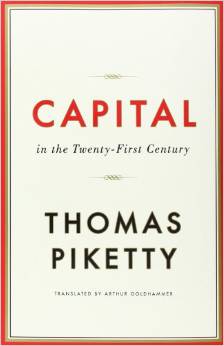 If it does nothing else, Thomas Piketty’s Capital in the Twenty-First Century has shaken up theright just as it looked to have escaped the shock of the Great Recession relatively unscathed. A bestselling economics tome by a French scholar (now available in English translation) is not so much a rarity as it is a unique phenomenon. No wonder the volume has elicited horror among conservative admirers of the free market and its accoutrements.

Piketty charges head-on against some of the dearest beliefs of the economic right. First he marshals evidence that persuasively measures the rise of economic inequality since the 1970s. In his scenario, the period from 1914 to 1970 was a historical anomaly in the sense that income inequality and the stock of wealth declined because of geopolitical and economic shocks like the World Wars and the Great Depression. But the reverse trend has become increasingly evident in the late twentieth and early twenty-first centuries, reaffirming historic patterns,

Secondly Piketty contends that the free market has a natural tendency to enhance the concentration of wealth because the rate of return on property and investments has been historically higher than the rate of economic growth. This notion challenges one of the bedrock beliefs of the economic right that the return on capital should fall as it accumulates, thereby rendering unnecessary any redistribution of wealth. However, Piketty calculates that wealth has globally enjoyed a pre-tax return of between 4-5 percent since 1700, well in excess of economic expansion. He also insists that the agency of inheritance perpetuates wealth regardless of whether the initial founder of the family fortune was a self-made man or woman. As a corollary to this he predicts that wealth concentration will increase as demographic factors in the form of an aging population slow down growth in the present century.

Thirdly, and this is what has really infuriated conservatives, he claims that the only solution to ever greater concentration of wealth is a progressive global tax on capital in the form of an annual levy that could start at 0.1 percent and rise to a 10 percent peak on the largest fortunes. He also suggests a punitive 80 percent tax rates on incomes above $500, 000. It is these ideas that have aroused conservative furor, causing Piketty to be dubbed the modern Marx – and worse. Many conservative economists rubbish his pessimism about the capacity for economic growth, pointing out that this underestimation also undermined Marx’s prophecy.

Quite what will become of all this is difficult to predict. The chances of ever enacting a global tax on wealth are effectively nil, something Piketty concedes. A punitive tax on high incomes is also unlikely to make it onto the statute books (although one did exist from the early days of World War II through the Eisenhower era without weakening growth, a charge that Piketty’s critics routinely level against his agenda). However this does not detract from the importance of his work.

Piketty’s is first serious intellectual challenge to the hegemony of conservative economic ideas since their rise to ascendancy in the 1970s. Far from being a proponent of New Democrat/New Labour weak tea, he is an unapologetic advocate of redistributive economic policies. Ideas are important but their timing is equally so, as the right proved in the 1970s and Keynes did in the 1930s. If progressive politicians on both sides of the Atlantic have the courage, they can use Piketty’s general arguments to justify more modest but still effective policies to challenge the concentration of wealth.

Almost every significant political change in modern times has been the product of political elites interacting with social movements – FDR and organized labor, LBJ and civil rights protesters, Ronald Reagan and the conservative movement. Perhaps Obama and Occupy are the first stirrings of a new twentyfirst century progressivism. If this takes off, Piketty’s work may yet achieve historical significance as marking its evolution from a reactive into a pro-active force that can draw on powerful ideas for its intellectual legitimacy.