Blogs > Cliopatria > Now this is interdisciplinary, if you want (a testimonial)

Now this is interdisciplinary, if you want (a testimonial)

Let me set out a soapbox and make a case. It's not one that I necessarily hold to all of but it stands up by itself when it's made like this. One of the dangerous things about being genuinely interdisciplinary is that it means not just raiding other disciplines for ideas and running back to Clio's Citadel to use them, but letting people from other disciplines inside your own to critique your methods and affectations and, in extreme cases, rearrange all your preconceptions in ways that feel inappropriate. In these terms, genuine interdisciplinarity is not just a challenge to one's own thinking, which of course it should be, but a threat to the discipline. If anthropologists, archæologists, geneticists, mathematicians, 'social physicists' and scientists in general start doing history, and they (as some are) are willing to learn enough history to make it count, purely text-based history stands to lose some of its legitimacy and identity. That said, as I was hearing argued at one of the papers at the recent International Medieval Congress at Leeds, it's hard to know what we might call this endeavour of scientific elucidation of the past except, well, history. But the point is one about the people we train not being the people who go on to do ground-breaking research, but only guides for those who actually understand the methods in use, while seeing their paradigms tested and discarded. This makes people defensive. And yet we keep on seeking it out, because of course we want to know what happened and these people may know how to help us find out. 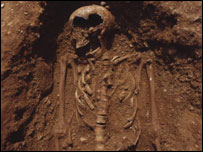 I first noticed this with the reaction to the work of an archæologist called Heinrich Härke on skeletons and the settlement of Anglo-Saxon England.1 He argued that there were skeletally obvious difference between two major groups at several sites he'd explored, which he claimed could be divided as 'British' and 'Germanic'. There were all kinds of reasons to mistrust that analysis when it was made: the biggest and most obvious one was that the discipline had spent a decade or so emphasising that ethnogenesis made concepts of ethnicity and race fluid and basically unfounded in biological reality, and now here came this archæologist who apparently hadn't got the memo and was stressing just those realities. (I suspect it's also possible that people were slightly uncomfortable with a German scholar laying heavy emphasis on race, which sounds old-fashioned in a range of ways not all of which have been harmless. I doubt an English scholar would have provoked the same reaction as Härke did. And no, I don't think that's how it should be.) But although his interpretation can be questioned in lots of ways, the data were real: he had two different sorts of skeleton to explain. Now, of course, we would try and carry out stable isotope analysis of the bodies' teeth to see where they had actually lived in their lives, but that's not exactly history rescuing itself; that's either history using science, or else it's science colonising history. And the same sort of battle is ongoing with the increasing rôle of DNA analysis, confused by the fact that very few people understand exactly what studies like Blood of the Vikings actually showed, and these people very rarely include journalists; I have a sketchy idea but only because I like talking to scientists and Steve Harding at Nottingham, who ran such a project, is very happy to talk to people.

You see what I mean? Texts are safe, because we can never finally resolve them but we can be expert in them all the same. But the empirical demands of history, when it's allowed to assert them by its practitioners, draw us to empirical evidence, and the ways to derive empirical evidence from archæogical remains, and indeed buildings, objects and yes, texts, or at least, writing, from non-archæogical contexts, are growing. But they're complicated, and they're going to involve laboratories. There is coming a point when those who want to identify as historians are either going to have study a lot of science, or back out and work only on literature. Now I expect that some readers will quarrel with my distinction between reading as literature and reading as historical source, but let them click the link I'm lengthily touting before they make answer. This is it: here is one historian, Michael McCormick at Harvard no less, who has already decided where he stands, and it's with the scientists. And as a result all that ethnogenesis work and the elaborate explanations of the Celtic assimilation into English society are looking rather threadbare: but because actual historians were involved, and deeply, and the team seems to like the exchange of ideas, what we are getting is not a return to the old paradigm of fire and slaughter or even mass enslavement of Britons by Saxons but a new idea that there must have been some very distinct preferential marriage practices of which we previously had no idea. Yes, they are proving things about marriage practice in the early Middle Ages using forensic science. We can work with this, if we actually want to discover what happened that is. Or we can complicate it and resist it. So, brothers and sisters, the time has come for each and every one of you to decide whether you are gonna be the problem, or whether you are gonna be the solution... Are you ready to testify?

(Cross-posted to A Corner of Tenth-Century Europe, or else it will be before very long.)

1. Härke's work e. g. Heinrich Härke,"'Warrior Graves'? The background of the Anglo-Saxon weapon burial rite" in Past and Present no. 126 (Oxford 1990), pp. 22-43; idem,"Finding Britons in Anglo-Saxon Graves" in British Archaeology no. 10 (London 1995), p. 7, online here. A measured critique in Andrew Tyrell,"Corpus Saxonum: early medieval bodies and corporeal identity" in William O. Frazer & Andrew Tyrell (edd.), Social Identity in Early Medieval Britain (London 2000), pp. 137-156. Härke responds to his critics, some of whom were less measured, in Heinrich Härke,"Archaeologists and Migration: a problem of attitude?" in Current Anthropology Vol. 39 (Chicago 1998), pp. 19-35, on Scribd here, and has now gone to work on similar themes on Russia where I suspect he meets fewer problems.