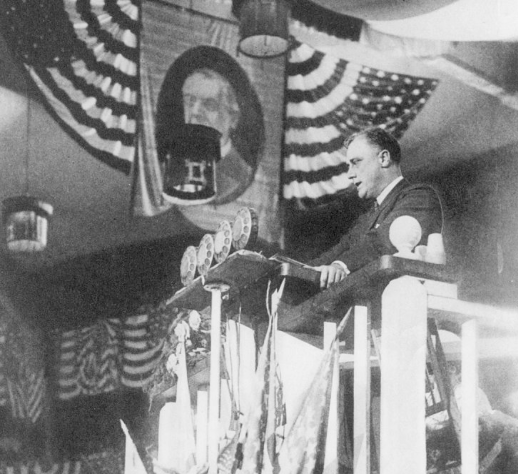 FACT "There is nothing at all unprecedented about the arrival of the Republicans in a politically inhospitable city. True, they have never come to New York before, not in all the many quadrenniums since they first gathered in Philadelphia in 1856. But in 1980 they met in Detroit, where Republicans and conservatives are endangered species, to nominate Ronald Reagan, of all candidates. In New York, rich Republicans live on Park Avenue or Fifth Avenue; in Detroit, they live in suburbs like Grosse Pointe Farms. More to the point, both parties have sometimes met in the same city in the same year, which by definition meant that one party or the other was occupying unfriendly territory. This took place in Chicago in 1884, 1932, 1944 and 1952." (R.W. Apple, NYT, 9-1-04)

FACT In 1944 President Franklin Roosevelt did not attend the Democratic Party convention that nominated him. Instead, highlighting his duties as a wartime president, he delivered his speech by radio from the San Diego Naval Base while on his way to Pearl Harbor.

FACT "The Republican convention that opens in New York today will be unusual. Its chief purpose is the re-election of President Bush -- nothing out of the ordinary about that. But it won't remind anyone of the 1972 or 1984 Republican conventions that propelled President Nixon and President Reagan, respectively, to second terms. The Nixon convention was devoted largely to demonizing his Democratic opponent, George McGovern. The message at Reagan's convention was stay the course and good as things are, they'll get even better if Reagan is re-elected." (Fred Barnes, WSJ, 8-30-04)

FACT "Mr. Kerry's campaign manager, Mary Beth Cahill, said the fact that Mr. Kerry was leading Mr. Bush at least in some polls, albeit by a tiny margin, was heartening. 'We're leading the president coming out of the convention and there are only three challengers in that position and they all won,' Ms. Cahill said. 'The White House can say whatever they want about this. We've had a very good convention.'" (NYT 8-3-04)

FACT "[T]he speakers must all beware the stage manager, an Oscar veteran who's also been tapped to conduct this year's Republican convention in New York. According to a small item inside the NYT, his arsenal includes a red button that can literally lower the podium into the stage, forcing a long-winded orator to stop--or stand around like a podium-less idiot. 'Only had to do it once. Bill Clinton. Atlanta,' he said, referring to the Clinton's famously yawn-inducing introduction to Michael Dukakis in 1988. 'He went on for quite some time. We kept flashing the lights, telling him his time was up, putting in the prompter his time was up, and in the end, Speaker Wright, who was chairman of the convention, asked me to lower the podium ... He finally wrapped it up and stopped.'" (Slate, 7-26-04)

FACT "[FDR] he was one of only two men (the other was Nixon) nominated five times for national office by a major party." (Michael Baron, WSJ 7-26-04)

FACT "[N]ot since the 1976 Republican gathering in Kansas City -- which pitted incumbent President Gerald Ford against former California Gov. Ronald Reagan -- have candidates fought for the nomination on the convention floor." (Reuters 7-25-04)

FACT "In 1880, the GOP denied former president Ulysses S. Grant a third-term nomination after 36 ballots, opting for James A. Garfield instead. In 1924, a Democratic convention at Madison Square Garden needed 103 roll calls over 17 days to nominate John W. Davis of New York. Yet as Mr. [David] Greenberg notes, these deadlocked conventions produced some of the worst presidents and nominees in history. And there weren't that many of them - only 10 GOP and 14 Democratic conventions have had to cast more than one presidential ballot." (Christian Science Monitor 7-26-04)

FACT "With George W. Bush and John Kerry all but deadlocked in most national polls and the election still more than three months away, leaders of both parties can find some solace in history: The site of a national convention has virtually never affected the selection of the candidate, the choice of his running mate, the content of the platform or the outcome of the election. Historians generally cite two exceptions, both in Chicago, where candidates benefited from a home state advantage. In 1860, after Lincoln's supporters packed the Wigwam, the new convention hall, he won the Republican nomination on the third ballot. In 1952, Gov. Adlai E. Stevenson's welcoming address to Democratic delegates was so warmly received that it encouraged the draft movement that led to his nomination, also on the third ballot." (NYT 7-18-04)