What Are the Origins of “Reasonable Doubt”?

Mr. Whitman is Ford Foundation Professor at Yale Law School, where he teaches criminal law and legal history. He holds both a law degree and a doctorate in history. 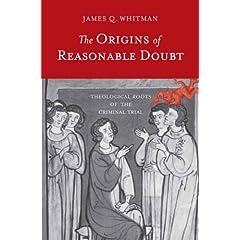 But what exactly is proof “beyond a reasonable doubt”? Anyone who has served as a criminal juror knows that the rule is not easy to understand. There is always some possible uncertainty about any case. Exactly what kind of uncertainty counts as a legal “doubt”? Exactly when are legal “doubts” about the guilt of the accused “reasonable”? Jurors are sometimes understandably baffled. Even the some of the most sophisticated members of the legal profession find the question too difficult to answer.

The result is a troubling situation indeed. Once a jury has determined a person to be guilty “beyond a reasonable doubt,” that person’s fate is almost always sealed. Even the emergence of new evidence, like the evidence of DNA testing, may not be enough to reopen a criminal case. Yet judges and legal scholars have come to the conclusion that the phrase “reasonable doubt” can be assigned no definitive meaning. A moral philosopher might raise disturbing questions indeed about this state of affairs. How you can send somebody to prison, or even to death, on the strength of a rule that nobody understands?

My new book, The Origins of Reasonable Doubt: Theological Roots of the Criminal Trial, uses history to account for this troubling state of affairs. In order to make sense of our law, we have to dig deep into its past. The reasonable doubt formula seems mystifying today because we have lost sight of its original purpose. At its origins the rule was not intended to perform the function we ask it to perform today: It was not primarily intended to protect the accused. Instead, strange as it may sound, the reasonable doubt formula was originally concerned with protecting the souls of the jurors against damnation.

In the criminal trial of past centuries, there was more at stake than the fate of the accused. The fate of those who sat in judgment was at stake at well. In part this was because jurors had to fear vengeance on the part of the relatives of the convicted man. But it was also for religious reasons. Convicting an innocent defendant was regarded, in the older Christian tradition, as a potential mortal sin. The reasonable doubt rule developed in response to this disquieting possibility. It was originally a theological doctrine, intended to reassure jurors that they could convict the defendant without risking their own salvation.

According to medieval doctrine, judging was a spiritually dangerous business. Any sinful misstep committed by a judge in the course of judging “built him a mansion in Hell.” This was especially true any time a judge imposed “blood punishments”—that is, execution and mutilation, the standard criminal punishments of pre-nineteenth-century law. To be a judge in a capital case was to participate in a killing, and that meant judging was full of spiritual peril.

And when it came to that sort of spiritual peril, premodern Christian theology turned in particular on the problem of “doubt.” Doubt was the voice of an uncertain conscience, and it had to be obeyed. “In cases of doubt,” as the standard theological formula ran, “the safer way is not to act at all.” This applied to judging just as it did to all other acts involving the individual conscience. As the standard Christian law explained, “In every case of doubt, where one’s salvation is in peril, one must always take the safer way. . . . A judge who is in doubt must refuse to judge.” A judge who sentenced an accused person to a blood punishment while experiencing “doubt” about guilt committed a mortal sin, and thus put his own salvation at grave risk.

The story of the “reasonable doubt” rule, which now seems so mysterious to us, is simply an English chapter in this long religious history. Common law jurors were Christians, and they were Christians who engaged in acts of judgment. This meant that to be a juror was potentially to “to pawn [your] Soul,” as the most famous pamphlet of the revolutionary era declared. Or as another pamphlet put it, “the Juryman who finds any other person guilty, is liable to the Vengeance of God upon his Family and Trade, Body and Soul, in this world and that to come.”

There is plenty of evidence that English jurors took these ominous threats quite seriously, especially at the end of the eighteenth century. Jurors experienced “a general dread lest the charge of innocent blood should lie at their doors.” It was in response to such juror “dread” that the reasonable doubt standard introduced itself into the common law, especially during the 1780s. The reasonable doubt rule arose in the face of religious fears. It is still with us today, a living fossil from an older moral world.

Such is the story my book tells. As it suggests, the “beyond a reasonable doubt” standard was not originally designed to make it more difficult for jurors to convict. It was originally designed to make conviction easier, by assuring jurors that their souls were safe if they voted to condemn the accused. In its original form, it had nothing to do with maintaining the rule of law in the sense that we use the phrase, and nothing like the relationship to the values of liberty we ascribe to it today. It was the product of a world troubled by moral anxieties that no longer trouble us much at all.

All this means that it is no surprise that our law finds itself in a state of confusion today. We are asking the reasonable doubt standard to serve a function that it was not originally designed to serve, and it does its work predictably badly. Most of all, it is no surprise if American jurors find themselves confused and troubled when they face the difficult task of judging the accused persons before them. The law cannot give any convincing answer to the question, what is the meaning of “beyond a reasonable doubt?” That is a question only history can answer.