Bridget the Grocer and the First American Kennedys

Neal Thompson is a journalist and author, most recently of the new The First Kennedys: The Humble Roots of an American Dynasty. 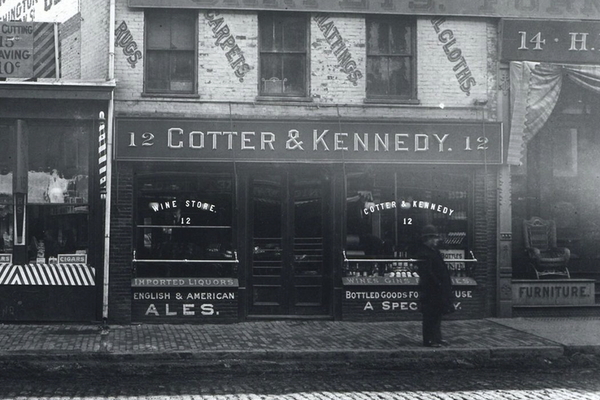 Given the number of words devoted to the story of the Kennedy family, it’s easy to think primarily about JFK in the White House, the assassinations of JFK and RFK, and the numerous other tragedies that have followed other members of America’s extended “royal family.”

Yet, largely overlooked beneath the tales of wealth, power, style and the premature deaths of the twentieth-century Kennedys are the lesser-known stories of the poor immigrant Kennedys who came to America in the mid-1800s, fleeing the collapse of their famine-ravaged homeland.

In particular, history has given short shrift to the dramatic and inspirational story of JFK’s widowed great-grandmother, Bridget Murphy Kennedy, the tenacious matriarch of the clan, a widow and single mother raising four kids alone, facing long odds in a hostile, anti-Irish climate.

Partly to blame is a strong, male-dominant bias in a family whose men clearly had complicated and imperfect relationships with women. When JFK visited his great-grandparents’ home turf in 1963, for example, he gave a shoutout to Patrick the barrel maker but not Bridget the grocer.

Her remarkable ascent — from maid to hairdresser to business owner — began less than ten years after her husband, Patrick, died at 35 of consumption (as tuberculosis was then known). It began at the tail end of the Civil War, as she donned her white shopkeeper’s frock and walked the aisles of her unnamed street-level East Boston shop, tallying her stock, making notes in a ledger book on what was running low, what needed restocking, what was collecting dust.

Over here were the teas, coffees, sugar, and flour, beside the scale used to weigh beans, rice, and spices scooped from barrels and bins. Over there, butter, cheese, eggs, and rashers, perhaps some mackerel, pickled salmon, cod. Standing at attention on shelves: bottles of relish, vinegar, honey, and molasses, beside the sperm and whale oil, the soaps and candles. At the counter, tins of hard candies, baskets of biscuits and bread. Arrayed out front, crates of fruits and vegetables and on a good day maybe the exotic bananas and “pine apples” Bostonians loved. Squeezed in or scattered elsewhere were the assorted dry goods, toiletries, ribbons, buttons, stationery, hosiery, and handkerchiefs that filled so many similar all-purpose neighborhood establishments, giving them their generic names — variety shop, notions shop. These immigrant-run mini marts, these mom-and-pop sundry shops, these convenience stores and bodegas: the striving toe-in-the-door outlets and emporiums of every working-class community, before and since.

And behind the counter? The good stuff—cigars and snuff, cider and ale, whiskey and brandy.

Like many Irish grocers, Bridget almost certainly sold a bit of liquor or beer, the grocery-groggery combo having proved to be more profitable and customer-friendly than selling produce and staples alone. With sickness lurking in the water, some customers felt that pasteurized beer was a safer alternative, and it was cheaper than milk. As one grocer said of his liquor sales, “A man would hardly have dared to go into business without it.” Said another: “Liquor is food.”

In Boston business directory listings, her shop would in time be listed simply as “B. Kennedy” or “Shop by Kennedy,” run by the “widow” Kennedy. Her store was initially located on Maverick Square, two blocks from her apartment, alongside the river of pedestrians and carriage traffic flowing steadily to and from the ferries and the shipping docks. Later, she’d move the shop to a first-floor space on Border Street, and would live with her kids in the apartments above.

The shop wasn’t much. Just a narrow room off Border Street displaying goods in boxes and barrels out front, atop crates and tables throughout the crowded aisles inside. But after nearly twenty years of working for others, she’d created a place of her own, where she was boss — a grocer, an entrepreneur. It had been a dream of hers and Patrick’s — one they’d briefly realized with the short-lived grocery shop they’d opened a year before his death in 1858. Now she was bringing it back to life. And by choosing to sell some booze (fifty cents for a quart of bourbon), her shop would become a casual, communal spot for local gossip and grog, a place for immigrants to buy from someone who spoke with the lilting familiar brogue of family and friends left behind.

As families settled into an era of post-war peace, Boston’s economy revived, putting a few more dollars in people’s pockets. No more rationing to support the war effort. Time to get back to normal. It was a propitious time for a scrappy immigrant to become an American business owner.

For Bridget, it was the start of a whole new life, a chance to finally paddle her own canoe.

Like other risk-takers operating a thousand similarly eager little immigrant businesses — saloons, salons, billiard halls, butcher shops, and bowling alleys — she was striving for independence, acceptance, and a slightly better future for her four kids. Her boldness reflected a changing city, in which Irish women and men were on a spirited ascent.

Bridget’s business coincided with the modest beginnings of a period in which the Irish became more fully integrated into city life. For the first twenty years after the Famine, the Irish had been Boston’s unwelcome guests. They held the lowliest jobs. They were sick and poor, dirty and desperate, made to feel lucky that the city even allowed them to live there. They huddled together and slowly found their place (at the bottom), and mortified Boston had grudgingly adapted.

The postwar Irish were different. Their ranks now included military veterans, ex-generals, and celebrated heroes. No longer charity cases, they began holding their own as business owners, lawyers, and even landlords. From the late-1860s into the ’70s, they found their way into city institutions, making inroads into the police force and fire department and, in time, the polls. Politically, they had no direct voice: no Irish person had served on the city’s eight-man Board of Aldermen, and only one had served on the forty-eight-man Common Council.

That would soon change, and dramatically so — with Bridget’s son, P.J. helping lead the way — but not quite yet. Though the Democratic Party preferred by the Irish was out of favor, stained by its stance on slavery, and though the party of Lincoln would dominate city elections for years to come, Irish politicians would make their mark on Boston soon enough.

The postwar years also saw Irish women begin to make their mark outside the home.

Women had served in empowering new roles during the war, running relief agencies, working in field hospitals, organizing donation drives. They worked at factories and on the assembly lines at arsenals, producing ammunition and other matériel for the war effort. Some continued to work as nurses after the war. Some became teachers, and in time Irish American women would dominate that profession in many US cities. Others would work as labor activists, civil rights advocates, suffragists, and journalists.

Old-school Boston wasn’t especially happy about the rise of an Irish middle class, nor the swelling chorus of women agitating for the right to vote. Harvard-trained Protestant elites still dominated the city — the Brahmins, as Oliver Wendell Holmes had dubbed them in 1860, in an article for the three-year-old Atlantic Monthly magazine; he named them after a high-ranking class of Hindu priests and teachers in India. These men and their fathers, their names stamped all over Boston — Adams, Appleton, Cabot, Quincy, Lowell, Lodge, Peabody, Winthrop — had overseen one of the nation’s most ethnically and culturally homogeneous cities. But as Boston absorbed more immigrants (not just Irish Catholics but newcomers from other parts of Europe and beyond), many founders’ families had moved out to the suburbs or their country estates. And with slavery now abolished, more Black families took up residence in Boston, albeit slowly.

With other postwar demographic shifts, Boston found itself in the swell of a midlife crisis. The city’s status as a leader in American politics, thought, culture, and literature was fading. It was no longer, in Holmes’s term, the “hub of the solar system.” Once considered the Athens of America, Boston was looking more like America’s Dublin. Charles Dickens had found the city “bright and twinkling” on his first visit, in 1842. “Boston is what I would like the whole United States to be,” he’d said, but during his return in late 1867, he changed his opinion. After landing at East Boston to start a months-long book tour — to read from A Christmas Carol (his tour is credited with easing New England’s opposition to Christmas, which would become a national holiday in 1870) — the ailing author found a very different Boston. “The city has increased prodigiously in twenty-five years,” he wrote to his daughter Mary. “It has grown more mercantile.”

In East Boston, business was indeed recovering from its prewar slump. And in the middle of the action was Bridget’s little shop on Maverick Square, close to her husband’s former workplace and the docks where he and she had arrived, where immigrant ships continued to land at the Cunard Wharf. His memory surely followed her around like a ghost.

Bridget was busier than ever in those postwar years, tallying and balancing her accounts — more tobacco, rum, and bitters for Henry Barnard, more green peppers and gin for Rhoda Cook, more lamp oil and brandy for Dr. Russell. Her sisters and cousins dropped in now and then, and her kids — ten-year-old P.J. and his teenage sisters — began to help, afternoons and Saturdays; the shop had become a hustling little family business. Another first-generation Irish boy (John F. Fitzgerald, soon to join P.J. as an upstart politician) recalled playing in the storeroom among barrels of sugar and flour at his parents’ North End grocery shop, watching customers stream through the door, thrilled at “being right in the middle of everyone, where everything was happening.”

At the height of the Famine, the London Times had grudgingly conceded this of the Irish: “among the many redeeming virtues of this intractable and unfortunate race is a strength of family affection which no distance, no time, no pressure, no prosperity can destroy.”

Bridget had for so many years been a victim, mistreated in Ireland and Boston, by the English and the Yankees. But she had emerged on the other side of her American acculturation having protected her family, hoisted them onto her back, and hauled them up to the front row of Boston’s postwar economic revival.

Within five years of the war’s end, Bridget and her kids seemed headed for a stable and more promising future. Then again, among the ranks of Boston’s business proprietors there was that one obvious distinction. She was a she—marginalized by gender as well as ethnicity. She was a shop owner but could not easily become an official US citizen. She was the head of her household and the family breadwinner but not allowed to vote or hold elected office. Her teenage daughters would confront similar limits. Bridget’s lone son, meanwhile . . .  she had high expectations for the young man of the house, despite emerging signs of some hooligan instincts. P.J. would be able to vote and could run for office, and in time he just might. If she could just keep him out of trouble.