Tom Standage on his Brief History of Motion 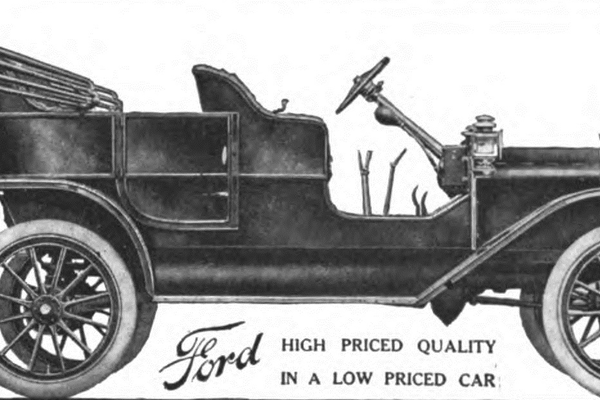 Tom Standage is the author of six history books, including A History of the World in 6 Glasses, The Victorian Internet (a history of telegraphy) and An Edible History of Humanity. His latest book, A Brief History of Motion, charts the rise of personal transportation, from the introduction of the wheel (around 3500 BCE) to the 21st century developments of electric cars, autonomous vehicles and services like Uber.

In addition to his book writing, Standage, who lives in London, serves as a deputy editor of The Economist. HNN discussed with Standage his views on technology, the writing of history and the global push to switch to electric vehicles.

Q. Your previous books, including The Victorian Internet and A History of the World in Six Glasses have focused on new technologies as drivers of societal change. Your histories differ from more traditional historical accounts which place greater emphasis on political change (e.g. a new prime minister or president).  Do you think that technological change is undervalued in most traditional histories of European and North American nations?

Yes, I think it is undervalued. My specific interest is the social impact of technology, and how people react to it, so this is a form of social history, with a focus on how the adoption of technology can cause bottom-up change. In that sense it’s an antidote of sorts to the top-down, “great man” view of history. But there’s then the danger of falling into the trap of technological determinism: the notion that technology is the only thing that drives societal change. In my work I try to show the interaction between “technology push” and “societal pull” — between what new technologies can offer, and what people actually want —because new things only take hold if they meet a genuine need or align with a wider societal shift. So I think you need to consider both the technology, and the prevailing social and political environment, rather than focusing on just one or the other.

Q. Your new book, A Brief History of Motion, begins with the development of the wheel around 3500 B.C.E and continues through contemporary automobiles. You limit your account to “personal transportation,” including the horse, carriages and the rise of the automobile. You ignored sea and air transportation. Why did you narrow your focus?

I’m mostly interested in the impact of the automobile, and the way it reshaped the world during the 20th century. To understand why the automobile was embraced so rapidly, particularly in the United States, it’s important to understand the context in which it appeared, and the earlier development of wheeled vehicles such as carriages, steam trains and bicycles. The car promised to combine their best elements: it offered the speed of a train, but could travel on existing roads like a horse-drawn vehicle, but also granted personal freedom for spontaneous travel, like a bicycle. We can only understand what happened with the car, and what might happen next, if we examine those earlier technologies. Hence my focus on wheeled vehicles, and why I ignored sea and air transportation.

Q. You are currently a deputy editor of The Economist. How do you balance this with writing books? Are your journalistic duties complementary to your book research?

I find they fit together very well. In my work as a journalist I focus on future trends and edge cases where we can see aspects of the future in the present. As an author I focus on patterns in history, and what they can tell us about the present and the future. So the two approaches are very complementary. I have less time than I used to for writing books, though, so the gap between my books keeps getting longer. It’s up to eight years now, whereas my first three books appeared within the space of five years.

Q.  Unlike many academic historians who confine their writing to past events, you are not afraid to make predictions about the future.  In a chapter titled “The Road Ahead,” you discuss the concept of “peak car” and you state “the enthusiasm for (personal ownership) of cars is finally waning.” You go on to state that the Coronavirus pandemic has discouraged public transit use but that it is “unlikely to herald a global boom in car sales.” This has not proven to be the case. In New York State in 2020, car registrations rose 18% over 2019. Why did this happen and do you still think the public’s desire to own cars will shrink in the future?

Yes, I think the pandemic-era rise in driving, which is driven in large part by an understandable reluctance to use public transport, will prove to be temporary, and in the medium term people will drive less, not more, as more people spend more time working from home. The longer-term trends are very clear: the number of miles driven per vehicle, and per person, each year is declining, even in the US, where both peaked in 2004. The fraction of people with driving licenses is declining in all age groups. Car ownership is becoming more expensive and less convenient, and the alternatives to car ownership, at least for people who live in cities, are becoming steadily more attractive as smartphones allow us to combine public transport, ride-hailing, bike rental and so on into an “internet of motion”. Smartphones can also directly replace the use of cars for shopping, meeting friends, going out to get food, and so on. Cars will not go away, but car ownership will, I think, make less sense for many people in future.

Q. In the U.S., President Biden has announced a goal of having 50% of all new cars sold by 2030 be electric vehicles. In the U.K. Prime Minister Boris Johnson has set a more ambitious goal: to ban the sales of all gasoline and diesel cars by 2030. Is this a worthwhile goal and do you think the U.K. can meet it?

Yes, absolutely. EV sales have gone from nowhere five years ago to about 10% of vehicles sold in Britain in 2021, and 16% if you include plug-in hybrids. I myself bought a plug-in hybrid last year, with a battery-only range of 40 miles, so it’s essentially an electric car except on longer trips out of town. The big challenge, both in Britain and America, and indeed elsewhere, is improving the infrastructure so that there are enough charging points. This is why I didn’t buy a pure EV: for longer trips finding a charging point is still very hit-and-miss. I always look for one when I’m in another city, and often they’re occupied, or don’t work, or aren’t compatible with the charging networks I belong to. This area needs massive investment, and it will create jobs, so it’s something politicians are looking at on both sides of the Atlantic.

Q. Can you share with HNN readers any new projects that you are working on?

I always like to have something cooking, as it were, and lately I’ve been digging into another area of interest, which is the Scientific Revolution of the 1660s, and its relationship to the history of medicine. At the time medicine was extremely unscientific, based on the ancient theory of humors, and germ theory did not take hold for another two centuries. So I’ve been digging into that and suspect there may be a book in there somewhere. But, at this rate, not until about 2031!