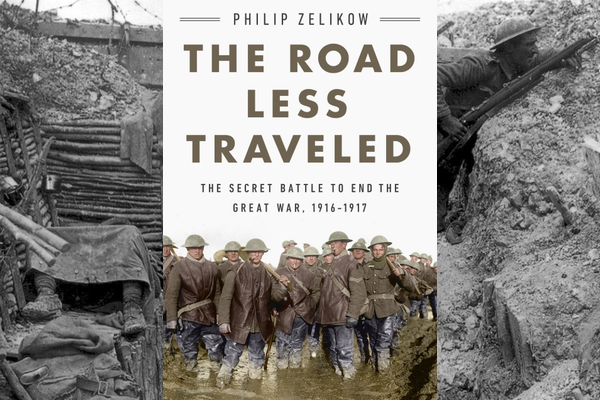 Could World War I have been ended in December 1916 with a negotiated peace, thus sparing millions of lives on both sides?

This starting proposition—an end to the war two full years before November 11, 1918—is explored in Philip Zelikow’s new book, The Road Less Traveled. It is a debatable assertion rejected by most historians.   Zelikow, however, is used to controversy. A former U.S. State Department official, he served as the executive director of the national  9/11 Commission and has co-authored two books on the Cold War with Condoleezza Rice.

World War I, of course, did not end in 1916, but continued through two more years of terrible carnage, eventually claiming the lives of 11 million soldiers and several million civilians. More than half of all the dead (including all the 117,000 U.S. combat deaths) were killed after December 1916.

According to Zelikow, a fleeting window of opportunity for a negotiated peace opened in the fall of 1916, when the two sides, the Allies and the Central Powers, were reeling from the bloody offensives of 1916. In the struggle for Verdun, the Germans and French had suffered more than one million casualties; the British lost 320,000 dead in the four months of the  Battle of the Somme.

Although the U.S. was officially neutral in 1916, our nation had supplied hundreds of millions of dollars worth of war material to Britain and France. President Woodrow Wilson had won re-election in November 1916 with the slogan “He kept us out of war.”

According to Zelikow, both sides would have sat down at a peace table if President Wilson in late 1916 had forcefully followed through on a demand for peace negotiations in a neutral country with himself as a mediator.

Had he done so, he would have followed the example of President Theodore Roosevelt, who convened a peace conference (with himself in charge) in 1905 that settled the Russo-Japanese War.

Zelikow’s argument that Wilson might have might have succeeded rests upon two assumptions. First, that he was a strong enough personality to lead such an effort, and second, that all the warring powers would have been willing to abandon their initial war aims and accept, in Wilson’s words, “a peace without victory.”

Zelikow believes Wilson was desperate to keep the U.S. out of the war. He cites a series of letters between the president and his close advisor Colonel Edward House. House, an honorary “colonel“ (never having served in the military) was combination of political advisor and best friend to Wilson, an introverted former university professor.

In the end, Wilson, after mulling over many ideas, made an awkward, half-hearted gesture in December 1916. He simply asked the governments of France, Britain and Germany to “state their war aims” as a prelude to beginning negotiations.  Both sides, under political pressure at home to deliver an absolute victory, quickly rejected his offer.

Zelikow suggests that the British and the French, dependent upon American loans and war material, could have been forced into negotiations if only Wilson had taken a tougher stand.

This view is not accepted by most historians of World War I.

Patricia O’Toole’s 2018 biography, The Moralist: Woodrow Wilson and the World He Made, states that Wilson was sincere in wishing for peace, but very naïve. “His conversations with House and the dispatches from his ambassadors in Europe ought to have convinced him his appeal would fail.” Instead, Wilson was “lost in dreams of peace…he allowed himself to be transported…to the world as he thought it should be.”

Barbara Tuchman, in The Zimmerman Telegram, notes that Wilson should have known that neither side was read to negotiate. Instead, he “ignored the mood of the Europeans” because he considered “opinions which opposed his as simply a waste of time.”

The top priority for Britain was the withdrawal of Germany from all occupied territories and restoration of Belgium as an independent country. France wanted to regain all of Alsace and Lorraine and demanded war reparations.

German Chancellor Bethmann Hollweg, in private correspondence with Colonel House, hinted that his country was ready to return Belgium to independence and withdraw from parts (but not all) of Alsace-Lorraine in France. Whether he could have gotten the belligerent Kaiser Wilhelm II and his military chieftains, Hindenburg and Ludendorff, to agree to such concessions is another question altogether, one that Zelikow leaves unanswered.

Instead, in a chapter titled “How Germany Saved Its Enemies,” Zelikow writes that the German war cabinet’s decision to begin unrestricted submarine warfare in January 1917 (which brought the U.S. into the war) was a huge miscalculation.

According to Zelikow, “The arrogant (German) high command, besotted with their victory mirage, actually rescued their bitterest enemies from defeat. And they insured their own.”

Zelikow asserts that a negotiated peace in 1916 would have avoided the mistakes made at the 1919 Versailles peace conference and probably averted World War II because “the situation at the end of 1918 was so ruinous that no postwar arrangements could have produced a happy ending.”

But an early, negotiated peace would have left the arrogant Kaiser Wilhelm II and his military cabinet in power. And if the French had not regained all their lost territory (including Alsace-Lorraine), they would have been primed for another war.

American entry into World War I was costly in blood and treasure, but it brought forward a new generation of American leaders, including generals Dwight Eisenhower, George Marshall and Douglas MacArthur, men who would lead the U.S. to victory in World War II

The book’s title, The Road Less Traveled, is taken from a well-known Robert Frost poem, The Road Not Taken (written in 1915).  The author, a veteran diplomat, believes that in international conflicts, a negotiated peace is too often, a “road less traveled.”

While one may question some of his conclusions, Zelikow’s book is deeply researched and offers an interesting new take on the tragedy of World War I.