Jerry Lembcke is coauthor with, Bill Tattam, of One Union in Wood: A Political History of The International Woodworkers of America. He is Associate Professor of Sociology emeritus at College of the Holy Cross. 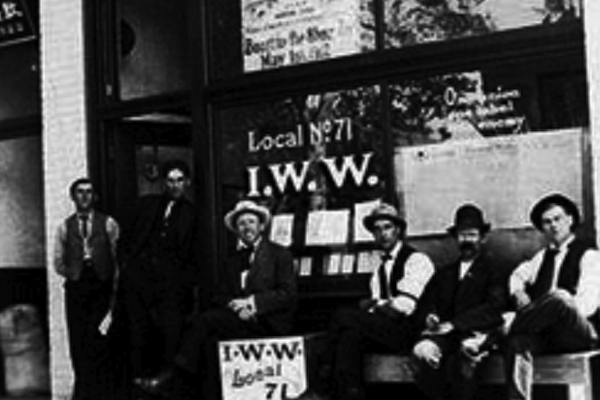 The Red Coast: Radicalism and Anti-Radicalism in Southwest Washington.

The historian Paul Buhle notes in a recent essay that deepening social crises with strains of social and economic class running through them may be stirring new interests in American labor history. The Red Coast provides evidence that he might be on to something.

The authors’ interest in the struggle of workers to form unions at the turn of the twentieth century—and the resistance of employers to those efforts—harkens to an old-school approach to labor studies in which scholars portrayed unions and companies, organizations, as the central actors in the stories they told. Goings, Barnes and Snider, however, blend that method, also known as “institutionalism,” with the “history from the bottom up” paradigm made popular by the “new” labor history movement of the 1960s and 1970s. Their sourcing of printed materials deposited in local and regional archives, biographies and interviews with participants in strikes and community mobilizations, and studies of immigrant groups that populated the coastal towns in which class conflicts erupted, all evince a kind of holism more common to sociology and anthropology than orthodox historiography. Politically, too, the authors are boldly inclusive: Communist Party members, prominent as union organizers and strike leaders across the country in the nineteen twenties and thirties—disparaged as alien outsiders by mainstream academics and sidelined by the historians trained in the new-school method—get their full due here as the reds of the Red Coast.

The Red Coast is an organized set of vignettes, short free-standing chapters that recount the class conflicts that gave rise to unions in Southwest Washington State. The so-called Gillnet Wars of the 1880s wrote the script that class relations would follow for decades: working-class immigrants, many of them Scandinavian, fishing for salmon with nets along the Columbia River met competition from river-front property owners who anchored massive fish traps to pilings driven into place by stream-driven machines. The trap technology was capital intensive and backed by the wealth of cannery owners. When the increased salmon catch drove the prices paid by the canneries too low for gillnetters to compete, they struck and attacked the traps. The Washington state Governor sent National Guardsmen to protect the traps ending the strike in 1896.

Scandinavians, prominent among the gillnetters, figured famously in the union campaigns going forward and none more so than the Finnish immigrants.  The Red Coast positions the Finns strategically on both flanks of the regional extract-export economy as loggers cutting and hauling old-growth timber, and dock workers loading logs and lumber for shipment abroad. Work in both industries was exhausting and dangerous. Jobs were seasonal and short, accessible through a boss-run hiring-hall system that kept workers dependent and wages low—conditions that bred anger and demands for reform. Union organizing is the through-line of this book and the Industrial Workers of the World (the IWW), founded as an anarcho-syndicalist movement in 1905, wrote much of the history it recounts. The IWW was well known for its workplace militancy, preferring to settle grievances through “direct action” like strikes rather than contract negotiations. But, as much, it was the battles it waged for free speech, and the spirit of collectivism it fostered in the mill towns and port cities, that would be memorialized by historians. And it was the Finns who brought the cultural assets to the front lines of class war.

Class struggle was a way of life for the Finns and the Finn Halls were its centerpiece. The halls hosted dances, theater, dinners, poets, political speakers, and Sunday School classes.  The hall in Aberdeen included a restaurant, gymnasium, apartments, and office space. The halls were viewed as employer-free spaces where organizers gathered to explain the principles of unionism and plan for strikes. Socialist Party speakers sponsored by the national organization were welcomed into the halls. Central as they were to the shaping of working-class identity and support of workplace control by workers, the halls were frequently ransacked by vigilantes with backing from rightwing and employer groups.

Women were the mainstays of Finn Hall life, and the roots of Red Coast Finnish radicalism in Old-Country Finland are brought into view in a chapter devoted to them. At the turn of the century, women were pillars of the Finnish Social Democratic [Socialist] Party that waged a general strike in protest of Russian dominance and demands for civil liberties and political representation. In 1907 they became the first women in Europe to vote in a national election. Impressed by the power of the strike and vote, the American sisters followed suit. When male strikers were beaten and jailed during the pivotal 1912 Grays Harbor lumber-workers strike, women wielded the picket signs and held the line. In the 1920s and 1930s, it was the women who spearheaded Communist Party organizing through the Finnish newspapers, art and literature, and summer youth camps.

The Chapter “Proletarian Novels” best illustrates the cultural depth of the working-class radicalism nurtured in the Red Coast socialist and communist communities. Here, the authors recover for us a literary tradition little known today outside of academic circles, to which Grey’s Harbor natives Clara Weatherwax (Marching! Marching! 1931), Louis Colman (Lumber 1931), and Robert Cantwell (Land of Plenty 1934) were major contributors. The book’s last Chapter, “Communist Lumber Workers in The Spanish Civil War”, traces the life-course of Grey’s Harbor workers who came to class consciousness through labor conflict, political maturation with the nurturing of the organized Left, and an awareness that the war against Spain’s Fascist Franco government was a war against racism and anti-unionism—a cause they knew from labor and Communist Party newspapers they could fight for. They signed up.

It is the authors’ skill at weaving a story of class formation—a class in and for itself—out of the economic, political, and cultural braids of work and community life left by those who made Southwest Washington red that makes The Red Coast a remarkable book, and all the more so to have done it at a time, ours, when identity politics has pushed class, as an analytical concept, to the margins of thought.