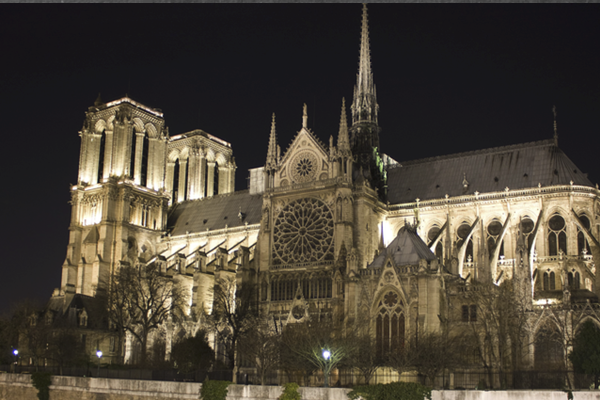 As word spread from text to text and across news wires on an otherwise routine Monday evening on April 15, 2019, a palpable sense of shock and sorrow began to sweep through the city, the nation and the world.  Anxious Parisians lined the streets in utter disbelief.  While some spectators took photos with their phones and sang Ave Maria, others prayed in silence and openly wept at the prospect of the collapse of their beloved cathedral.  Notre-Dame, which had stood at the center of Paris for eight centuries, continued to burn out of control.  Over the course of the next few hours, Jean-Claude Gallet and his expertly-trained firefighters would execute an audacious plan to extinguish the flames and ultimately save most of the sanctified structure.

Prior to the known (and joyful) outcome, hundreds of millions of people around the globe, including Catholics, Protestants and agnostics, shared moments of dread and redemption and vowed to rebuild “Our Lady of Paris” – the translation of “Notre-Dame.”  Why did the fire at Notre-Dame both personally consume and devastate its myriad onlookers?  In Notre-Dame: The Soul of France (2020), Agnès Poirier delivers an exceptional account of the historical, spiritual and psychological centrality of Notre-Dame in the lives of her followers – past and present.

Through chapters two and three, Poirier traces the founding origins of the cathedral and explores how Notre-Dame steadily became embedded into the culture and conscience of the country. Upon its inaugural construction on the Île de la Cité – a small island on the Seine River - in the year 1161, only fifteen percent of the French resided in cities.  Paris, however, boasted a population of more than a quarter of a million – the largest city Europe.  Rather than a product of a monarchical disbursement, the laborious creation of Notre-Dame relied on generous contributions from nobles and churchmen and relatively meager (yet no less noble) donations from impecunious town-dwellers and peasants. (p. 25-31) Over the reigns of Philip II (1180-1223) and Philip IV (1285-1314), Notre-Dame received a significant infusion of funds from royal coffers and began to figure prominently in state affairs.  The original architect, whose name has been lost to history, not only designed a Gothic masterpiece but also managed to “create the highest building ever erected in a city” in its time. (p. 32-40)

In the late sixteenth century, zealous bands of Catholics and Protestants took up arms and battled to impose their brand of Christianity upon France.  Subsequent to the assassination of King Henry III (August 1, 1589), the country descended into chaos and struggled through a vacuum of power.  To foster a countrywide reconciliation, Henry IV built a coalition of religious moderates at the convened Estates-General in January 1593, converted to Catholicism, accepted the crown of France at Chartres cathedral (February 27, 1794) and visited Notre-Dame with his entourage a few weeks later to create a public spectacle for peace. As Henry listened to choruses of Te Deum in the cathedral, billets (leaflets) and town criers announced his intention of forgiving and pardoning Catholic radicals in the city, who had repeatedly incited violence against their perceived enemies, in return for their departure from Paris.  Subsequently, annual processions from Notre-Dame would mark the day Henry IV – otherwise known as Henry The Great – effectively ended the French Wars of Religion for the next two hundred years.  As Notre-Dame continued to rise in prominence, Louis XIII (the son and successor of Henry IV) vowed “‘to rebuild the great altar of Notre-Dame of Paris, with an image of the Virgin holding her precious son taken down from the cross’” for the purpose of proclaiming Mary “‘the special protector of our Kingdom.’” (p. 48-52)

On the role of the cathedral in the French Revolution (1789-1799), Poirier commendably captures the ideological contours of a country riven by extremism across the intellectual and political spectrums.  Immediately after storming the Bastille and liberating its prisoners on July 14, 1789 – the defining anti-monarchical, opening salvo of the Revolution – gleeful Parisian rebels assembled en masse at Notre-Dame to commemorate the rebellious act of defiance.  Only three weeks later, the National Assembly voted to level French society by ending the feudal-aristocratic order and promptly gathered at Notre-Dame once again to both celebrate their democratic achievement and begin the process of composing the Declaration of the Rights of Man. (p.55-57) After deposing Louis XVI in 1792, the revolutionary leaders became further radicalized upon an invasion of Austrian and Prussian armies and a large-scale uprising in western France (the Vendée) – both intent on restoring the King and monarchical rule.  To repel the dual-threats, Notre-Dame’s “bells and bronze art objects, such as crucifixes and lecterns, were ordered to be melted down to make cannon.” (p. 61)   After proclaiming the abolition of Christianity in 1793, the revolutionaries notably converted Notre-Dame into a “‘Temple of Reason’” and closed other churches.  Two years later, Notre-Dame and France returned to Catholicism after the fall of Maximilian Robespierre and his short-lived tyrannical rule.  Rather than fully contextualizing the tumultuous years of the Revolution and its collision with the ancient institution of Catholicism, the centuries-old traditions of Notre-Dame and the entrenched worldview of its parishioners, Poirier instead produces a somewhat overly brief summation of the era.

In the second half of the monograph, Poirier highlights the selection of Notre-Dame by Napoleon to receive the crown of Emperor (May 18, 1804) in Chapter 5 and then insightfully delves into the literary and material revivification of the Cathedral in the nineteenth century.  When Victor Hugo published Notre-Dame de Paris (1832) – a novel that would be retitled The Hunchback of Notre-Dame, the tale captivated the French imagination and inspired a movement to restore medieval buildings to their original, glorious condition.  After years of neglect, Notre-Dame suddenly earned the attention of scholars, dignitaries, government officials, the populace-at-large and the young and brilliant architect – Viollet-le Duc.

As a young man, Eugène Viollet-le-Duc (1814-1879) considered the two most prestigious schools of architecture in Europe – the École des Beaux-Arts (Paris) and the Académie de France (Rome) – as largely bereft of intellectual integrity, beholden to rigid and fossilized thinking and filled with professorial cliques determined to stifle original thought in order preserve their power and privileges.   Consequently, Viollet-le-Duc selected a mentor, developed as a semi-autodidact and won the attention of officials for his architectural vision and prowess.  In 1844, the French government adopted his audacious twenty-year plan to restore Notre-Dame to its original form by rebuilding “the thirteen steps that used to lead to her façade and had been filled around 1507.” (p, 108)   In addition, Viollet-le-Duc planned on recreate the original statuary – including figurines of the twenty kings of Judah removed during the most radical phase of the French Revolution. (p. 110) From the pen of Victor Hugo and the designs of Viollet-le-Duc, Notre-Dame re-entered the historical and spiritual conscience of the French on a grand scale.

Through eight centuries fraught with disappointment, disease and death, punctuated by royalty, revolutionaries and reform and infused by countless lives filled with love, hope and joy, Notre-Dame epitomizes the collective struggle of Western Civilization in periods of triumph and tragedy.  As the cathedral serves as a link to both our historically-constructed present and aspirations for the future, the socio-cultural significance of Notre-Dame upon state and society cannot be overstated.  Hence, Notre-Dame: The Soul of France deserves plaudits for  revealing the sanctity of its symbolic place in the transcendence of time.