Paris, City of Dreams: Napoleon III, Baron Haussmann and the Creation of Paris

It has been a long, long wait.  After years of dreaming and months of planning, your first trip or perhaps equally anticipated return-trip to Paris fell apart due to the global outbreak of COVID-19.  In cancelling your airline tickets and hotel, the chance to walk the cobblestone streets of the “City of Light” vanished with a sigh and considerable disappointment.  Yet, you are strong and remain hopeful for the future.  Imagine: One year and some months have passed, and a vaccine has allowed the world to rediscover its passion for international travel.  While emerging from the underground Metro subway system near the Eiffel Tower, you contemplate your good-fortune and brim with excitement.  You are not only alive…but you can now fully live again.

On an elevator to the top of the “Iron Lady” – a popular nickname for the Eiffel Tower, you glance at the mesmerizing views of the city and become aware of the diversity of your companions.  Surrounded by people from Brazil, the Netherlands, Saudi Arabia, Senegal, South Korea, Spain, Taiwan, Thailand, Venezuela and elsewhere, it seems the entire planet has convened to celebrate the end of the COVID-19 era in Paris.  After purchasing a delicious made-to-order crepe from an outdoor kiosk near the Louvre, you take a short stroll and wait in-line for twenty minutes to sip one of the finest hot chocolates in Europe at Angelina – a world-famous chocolatier and tea house established in 1903 on the Rue de Rivoli.

While gazing at the chic Parisian elite at Angelina, two questions come to mind: 1) When was modern Paris constructed? and 2) Who was responsible for planning the streets and developing the distinctive white apartment buildings that define this stunningly beautiful city?  In the new monograph, Paris, City of Dreams: Napoleon III, Baron Haussmann and the Creation of Paris (2020), French historian Mary McAuliffe has delivered a highly-engaging and enjoyable narrative on how the “City of Light” achieved its stunningly beautiful architectural and structural character – a book recommended for anyone visiting Paris.

Visions of Grandeur: A New Nation, A New Paris

In early 1848, waves of revolt and revolution swept through the German states, the Italian states, the Austrian Empire, Denmark, France and elsewhere across Europe.  Decades and centuries of fossilized, monarchical regimes became besieged with demands for popular representation in government.  On 10 December, the newly-proclaimed Second Republic witnessed the election of Louis Napoleon – the nephew of Napoleon Bonaparte – to the presidency.  Rather than a majestic metropolis, contaminated water, dirt, suffocatingly narrow streets and dilapidated, overcrowded housing teeming with restless citizens defined the city of Paris.  At the outset of his term, the French president developed a strategic vision to transform the capital into a worthy symbol of the nation by recreating the city to enhance the beauty and the lives of its proud inhabitants.  Near the conclusion of his constitutionally-mandated one term in office, Louis Napoleon orchestrated a coup d’état, seized power as Emperor Napoleon III and ended the Second Republic in 1851.  As McAuliffe deftly notes, the president-turned-monarch began the recreation of Paris one year later by partnering with two Jewish brothers, Emile and Isaac Pereire, and their banking house - Crédit Mobilier – a rival to the financial empire of the Rothschilds.  In the Pereires, Louis Napoleon secured the requisite means to underwrite the reconstruction of Paris through bond-issues to raise capital.

To accomplish the vast undertaking to revamp Paris and lift more than 600,000 of its residents out of squalor (out of a population of one million), Louis Napoleon selected the Prefect of the Bordeaux – Georges-Eugène Haussmann.  Louis Napoleon and Haussmann fostered a complimentary working relationship and commenced upon bringing to fruition the formerly proclaimed urban dream of Napoleon Bonaparte when he once famously stated “I intend to make Paris the most beautiful capital in the world.” (p.51) From chapters three to thirteen, McAuliffe follows the three “systems” of development unleashed by Haussmann.  The first phase or “system,” which focused on the nucleus of Paris, commenced with the elongation of the Rue de Rivoli and continued with a significant reconfiguration of the Latin Quarter, the design of an exquisite park (Bois du Bologne) and the establishment of large markets at Les Halles.  In his attempt to add kilometers to the Rue de Rivoli, progress halted due to the disparate, steep grades of the streets.  Haussmann remained undeterred and promptly overcame the conundrum by elevating “most of the surrounding neighborhoods” to the same level with large-scale engineering tactics.  In 1858, Haussmann launched his second system – a vast and bold undertaking to sweep away considerable portions of the city and turn his urban vision of grandeur into a quotidian reality for Parisians of the nineteenth century and beyond.  On both the Right Bank (the northern side of the Seine River) and the Left Bank (the southern side of the Seine), Haussmann lengthened and widened streets, demolished old buildings, installed new sewage and water systems, remade the Île de la Cité (the small island on the Seine containing Notre-Dame cathedral (est. 1260), planted new trees and added water fountains around the Avenue des Champs-Élysées and redrew the boundaries of the arrondissements – the districts of Paris.  Most significantly, Louis-Napoleon’s grand architect redefined Paris by constructing a plethora of simple yet elegant, off-white apartment buildings that still stand and exude the romance of the city today. 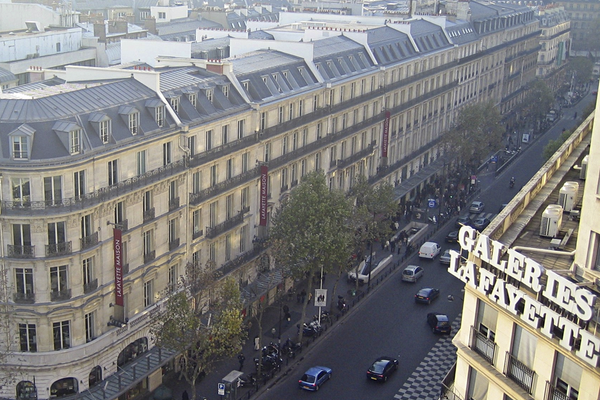 Regardless of a public backlash to the steep cost of the tripartite-phased project by the time of the Third System in 1861-62, Haussmann doubled the size of Paris, increased its population, engineered a far-more livable city for its residents and ultimately won-over many of his critics due to his aesthetically-inspiring designs.  For a number of artists and intellectuals, however, Haussmann symbolized empty notions of progress at the expense of Parisian communities with ties to the ancient past. (p. 116-171)

Through each chapter, McAuliffe intersperses the architectural remaking of Paris with biographical pastiches of a new generation of artists and literary savants.  The novelist Victor Hugo, who had sided with the monarchy against the masses during the large-scale revolt by workers in June 1848, changed course eighteen months later upon the brazen consolidation of power by Louis Napoleon in a successful coup.  Beyond launching a “small resistance committee,” Hugo picked up his talented quill, issued a virulent broadside and accused the duplicitous monarch as being “someone who ‘lies as other men breathe.’” (p.10-14, 36-37) Beneath the façade of the newly-remade, bourgeois Paris, Hugo published the first segment of a literary masterpiece on the lives of the destitute and the working-poor – the largest segment of the Parisian population – on 3 April 1862.  By the end of June, copies of Les Misérables had sold-out at booksellers across the city. (p.166-171) His tale on the struggles of Parisians to survive on a day-to-day basis offered a riveting and eloquent contrast to the Paris of Louis Napoleon, Haussmann and the elites.

In response and reaction to the triumph of Louis Napoleon and his authoritarian regime, Hugo, the female novelist George Sand, several emerging artists, including Édouard Manet, Claude Monet, Berthe Morisot, and a coterie of young intellectuals gathered in Montmartre (an area largely untouched by Haussmann) and/or the Left Bank near the Sorbonne and produced a vibrant, countercultural alternative to the new order defined by kleptocratic power and crass materialism.  Indeed, their brilliant, soul-fulfilling work continues to flourish in academe, on theatrical stages and in the art world today.

In Paris, City of Dreams: Napoleon III, Baron Haussmann and the Creation of Paris (2020), Mary McAuliffe has written a superb historical synthesis of scholarship on the period and thus provides a near-perfect introduction to the “City of Light” in the mid-nineteenth century.  Future visitors of Paris will also profit by reading two previously published books by the author – Dawn of the Belle Époque: The Paris of Monet, Zola, Bernhardt, Eiffel, Debussy, Clemenceau, and Their Friends (2014) and Twilight of the Belle Époque: The Paris of Picasso, Stravinsky, Proust, Renault, Marie Curie, Gertrude Stein, and Their Friends through the Great War (2017) to fully explore the evolution of Paris and French society and culture from 1848-1914.

It has been a long, long wait.  Hopefully, the world will receive a viable vaccine to COVID-19 in the coming months and Paris – a true “City of Dreams” – will once again become a reality for millions of excited, historically-curious travelers.