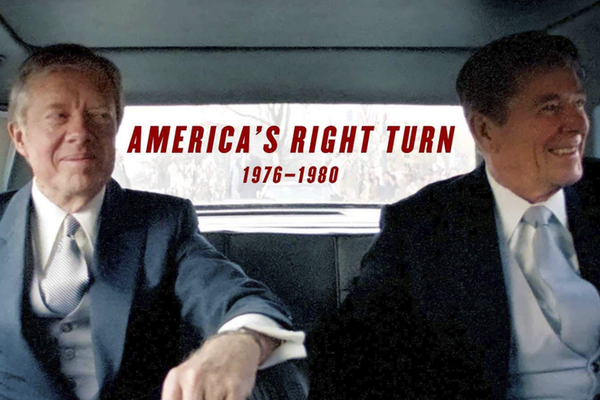 First, despite the title, the book is much more than a political biography of Reagan. Covering the years 1976-1980, this is the latest in Perlstein’s four-volume series on the rise of the American conservative movement.  In fact, much of Reaganland details the rise and fall of the Carter administration, which, of course, made Reagan’s election in 1980 possible.

Second, while Donald Trump is mentioned only once (as a young real estate developer buying a Manhattan hotel with government subsidies), this book goes a long way to explaining the rise of the conservative constituencies (e.g. blue-collar workers, evangelicals) that made his 2016 election possible.

As Reaganland sets forth, many of the tactics used by Trump’s campaign were invented or perfected by Reagan’s skilled team of advertising and PR professionals. These include thinly veiled racist language to appeal to “aggrieved” white voters, careful cultivation of evangelical Christians and foot-stomping, flag-waving rallies in blue-collar cities.

Although the phrase “Make American Great Again” was used in Reagan’s campaign, it was just one of a dozen different messages, all implying the nation had declined under Jimmy Carter. The all-white crowds that attended Reagan’s rallies often chanted “Reagan’s right! Reagan’s right!”

Some of the issues in the 1980 campaign would be familiar to today’s voters, such as the loss of manufacturing jobs, increased crime in big cities and a perceived weakness in the military. Other issues, such as Carter’s decision to cede control of the Panama Canal, the SALT II nuclear arms talks and the campaign for the Equal Rights Amendment, are topics that have faded out of sight.

To read Reaganland is to be immersed in the world of 1979, which where the pace of life, at least in terms of media consumption, was far more leisurely. Mass communication was limited to the three TV networks and your local daily newspaper. Cable TV was generally limited to distant rural areas and the Cable News Network did not produce its first newscast until November 1980. The worldwide web, smart phones and streaming media were the stuff of science fiction. Most phones used rotary dials and music lovers purchased vinyl albums.

For political campaigns, this meant a relentless focus on staging a series of colorful campaign events to gain coverage in local newspapers and TV stations. Print was the dominant medium, with some 1,800 daily newspapers across America, all of them influencers on local voters.

In this pre-Internet age, the only way to reach directly into American homes with an unfiltered message was through the mail — and a skilled right-wing marketer gave conservative causes a major advantage. Richard Viguerie perfected the art of direct mail over twenty-five years; he was dubbed “the six-million-dollar man” for his ability to rake in huge sums with a single, carefully targeted mailing

This fundraising tool was just one of the factors that gave the conservative movement new power that enabled it to fracture the traditional liberal coalition of labor unions, urban dwellers and white-collar workers. Perlstein describes the rise of a right-wing “counterintelligentsia,” including the American Enterprise Institute, the Heritage Foundation and the American Conservative Union. These groups churned out fact sheets, position papers and editorials supporting “free enterprise” and “reduced government intervention.”

While candidate Reagan usually projected an image of sunny optimism, his campaign staff was busy appealing to the darker recesses of the American psyche. Perlstein notes “Reagan’s managers were targeting voters who felt victimized by government actions that cost them the privileges their whiteness once afforded them.”

This climate of white racial grievance was fostered by Conservative-leaning newspapers, like The Chicago Tribune, which ran dozens of stories in 1979 about “welfare queens,” usually Black mothers, who “grew comfortable living off the public purse.”

A National Election Studies poll in 1980 found that the number of Americans who supported increased spending to improve the conditions of minorities fell to 24%, a record low. Instead, 46% of those surveyed said minorities should instead “help themselves” out of poverty.

Other campaign messages appealed to the fears of suburban women and evangelical Christians. Campaign surrogates spoke of “threats” to the American family in the form of homosexual teachers, “women’s libbers,” abortion mills and rampaging criminals from the inner city.

Reagan benefited enormously from President Carter’s many stumbles, some self-inflicted and others due to outside forces. In the summer of 1979, a gasoline shortage swept across America. Kicked-off by increasing worldwide consumption and then exacerbated by an American trucking strike, long lines formed at service stations. Frustrated drivers demanded Carter end the shortage.

Then in November 1979, Iranian militants seized 52 American diplomats at the embassy in Teheran. Carter’s favorability ratings plummeted. At the July 1980 Democratic Convention, Carter barely survived a challenge from Senator Ted Kennedy. Moderate Republican Congressman John Anderson ran as an independent candidate and attracted independent voters by advocating a 50 cent per gallon gasoline tax. On election night, Reagan swept to victory winning 51% of the popular vote to Carter’s 41% and gaining a landslide in the electoral college: 489 to 39.

Perlstein’s great strength is weaving together a compelling narrative from a range of disparate sources. He is particularly skillful at showing how popular culture can influence voter concerns. Thus, Reaganland includes references to Eric Clapton, Tom Wolfe, Jane Fonda and movies such as The China Syndrome, Star Wars and The Godfather.

One of the book’s failings, however, is a superficial treatment of Reagan the man. His two younger children, Patti Davis and Ronald Reagan, Jr. are never mentioned. Nancy Reagan is treated as a lightweight who merely organized parties. Several other biographers shown that she had a major influence on her husband’s policies and personnel choices.

In this campaign year, a shelf full of books have been written about Trump. Administration insiders (John Bolton) and family members (Mary Trump) have all shined a light on the many flaws of Donald J. Trump.

But as Reaganland reveals, Trump did not rise in a vacuum. He tapped into racial divisions and cultural anxieties that had been carefully cultivated years ago by Reagan and his far-right supporters.