The Decline and Fall of Socialist Zionism (Review)

Ralph Seliger is a freelance writer, the final editor of the print version of Israel Horizons magazine (discontinued in 2011), and currently edits The Third Narrative website. 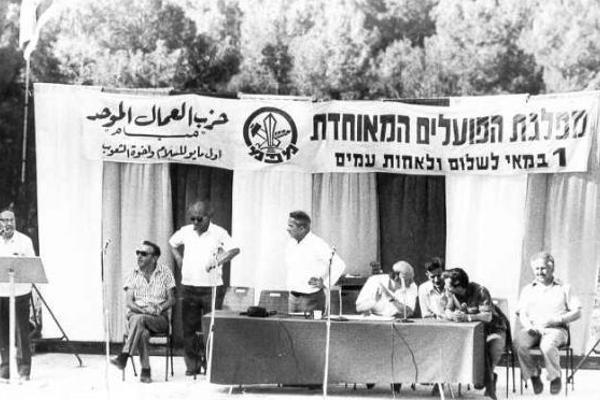 1950s Mapam May Day meeting. Slogan reads '1 of May for Peace and Brotherhood of the Peoples.

Review of Kibbutz Ha'Artzi, MAPAM, and the Demise of the Israeli Labor Movement by Tal Elmaliach (translated from Hebrew by Haim Watzman), Syracuse University Press, 2020.

It may seem surprising that this work by a young Israeli historian does not depict recent events that have all-but destroyed the political parties formerly associated with the “Labor Movement” in the title. Instead, Tal Elmaliach concentrates on the 1950s through 1977, the year that Israel’s politics were shaken to the core when a Likud-led right-leaning government was elected for the first time. (A post-doctoral fellow at the University of Wisconsin-Madison from 2015-17, he is currently at Ben-Gurion University in Beersheva, Israel.)

The Labor Party has won, lost and tied electoral contests since, along with its frequent ally, the more left-wing Meretz.  Both have been stigmatized by the failed peace process of the 1990s, and have experienced catastrophic decline in support, as noted by Haaretz columnist Chemi Shalev in an April 1st article, reviewing this past March round of elections:

“The remnants of the movement that founded Israel and ruled it for decades, Labor and Meretz, were forced to band together to avert electoral extinction; they wound up with 5.83 per cent of the vote, which yielded a grand total of 7 seats in the new Knesset.”

This dwindled to six out of 120 Members of Knesset, as a right of center ally defected to Netanyahu’s side shortly after the election.  Labor and Meretz have also reverted to their former status as totally separate parties.

In  1992, Labor and Meretz won 56 seats to form the core of Yitzhak Rabin’s peace-oriented coalition.  They returned briefly to power under Ehud Barak in 1999-2000, but have struggled ever since the Second Intifada led to the election of Ariel Sharon in 2001.  In alliance with a small dovish party led by Tzipi Livini, Labor gave Prime Minister Benjamin Netanyahu a run for his money in 2015, but has now fallen to the brink of extinction.

The other entities in the title, “Kibbutz Ha’Artzi” and “MAPAM,” were respectively the federation of kibbutzim (communes) and the left-socialist political party founded by the first pioneering Zionist youth movement, Hashomer Hatzair (the “young guard”).  MAPAM, Israel’s second largest party in the early 1950s, became a major component of the Meretz party created in the 1990s.

There were two other kibbutz federations of the secular-Zionist left, each associated with distinct political parties.  One of these, MAPAI, became Israel’s largest and most influential party under the leadership of David Ben-Gurion, the country’s first and until recently, longest-serving prime minister.  MAPAI was also the original political home of Prime Ministers Levi Eshkol and Golda Meir; it merged with two other parties to form the Labor Party in the late 1960s, and eventually formed a common electoral slate with MAPAM, known as the Labor Alignment.

Dr. Elmaliach embeds his analysis of Kibbutz Ha’Artzi (translatable as the “National Kibbutz”) and MAPAM (the Hebrew acronym for “United Workers Party”) with many instances of cooperation and conflict with the other two left-Zionist movements, and their functioning within the Histadrut trade union federation, which MAPAI more or less dominated in periodic elections.  The Histadrut doubled as the holding company for a number of member-owned industrial and agricultural cooperatives that largely shaped the economy under the British Mandate and Israel’s first decades as an independent state.

This plethora of parties, movements and related institutions makes this book a challenge for anyone not familiar with this history.  Elmaliach weaves a complicated picture that toggles back & forth between the Kibbutz Ha’Artzi/MAPAM movement and the “labor movement” of the title.  He advances an economic structural and sociological analysis for the decline of Israel’s Zionist left.

His work is grounded in historical facts that do not reflect well on MAPAM, the most left-wing of pioneering Zionist movements and the broader labor movement of which it was a part. The Kibbutz Ha’Artzi/MAPAM movement’s leadership was dominated by two strong personalities, Ya’akov Hazan and Meir Ya’ari, for decades into the 1970s.  Elmaliach (who was brought up on a kibbutz) views their duopoly in caustic terms: “Ya’ari may have been accused of suffocating paternalism, but Hazan was an expert at axing new ideas.”  Together, they resisted merging with the rest of the labor camp into the Labor Party, but also ensured that they were not fully divorced from it.

The differences among the three major labor streams are not deeply examined but brings to mind the expression, “the narcissism of small differences.”  Both MAPAM and the Achdut Ha’Avoda (“brotherhood of labor”) movement, with which it merged from 1946 until 1954, were pro-Soviet.  MAPAM continued to regard the USSR as the “socialist motherland” until Nikita Khrushchev’s dramatic revelations about Stalin to the Communist Party Congress in 1956, and even after the Soviet Union had totally switched from materially allying with Israel to arming Egypt and other Arab forces after the rise of Gamal Abdel Nasser.

There were some significant differences occasioned by the “statism” of Ben-Gurion, who favored building national institutions in the new Jewish state at the expense of the separate kibbutz/political movements.  The three movements maintained separate institutional infrastructures, which included different training facilities, teacher colleges, and publications.  They zealously defended the distinct legacies of their founders and emphasized their ideological differences, but none more energetically than the Kibbutz Ha’Artzi/MAPAM movement, which regarded itself as Marxist-Leninist.  These differences began to break down when Hazan and Ya’ari were effectively forced into retirement in the early ‘70s.

Elmaliach writes of the emergence of a “New Left” at that time, akin to similar currents in the US and Europe, that reached across the movements for a fresh look at society by a new generation in revolt against the establishment -- which in Israel meant the Old Left.  In this connection, he writes of the Tzavta cultural club, a Tel Aviv center sponsored by the Kibbutz Ha’Artzi/MAPAM originally to advance its Party-approved ideology; eventually young activists succeeded in opening Tzavta to diverse contributors and views, and it became a popular source of entertainment for the general public.

The author includes in his analysis the emergence of a technocratic managerial elite in the running of kibbutz enterprises, which pressured all the kibbutz movements to rationalize their operations for the sake of profit, including industrialization and the hiring of non-kibbutz workers (ideologically anathema to many) to raise living standards.  He sees this as part of a global trend among Western democracies, including within established leftwing parties, toward “neoliberalism.”

Israel rose with astonishing rapidity from Third World scarcity to the technologically-advanced productive capacity of a First-World Western economy.  Sadly, this rapid development accentuated the difficult adjustment of the new masses of Jewish immigrants and refugees from Arab and other Muslim-majority countries, who doubled Israel’s population in the 1950s and early ‘60s.  They were culturally distinct from Israel’s founding generations of Ashkenazi Jews (of European origin) who had already created the early ethos of a country striving to be Western and mostly secular.  The newcomers were generally more traditional and religious in their outlook, and not receptive to the unconventional and communal lifestyle of the kibbutz.

This Mizrachi (Middle Eastern) working class suffered in their initial decades in Israel from lacking the protection of being embedded within one of the left movements (known then as “proteksia”).  The author writes of the inequitable impact of the mid-1960s recession, because there was no national unemployment insurance for workers in the construction trades and other private enterprises where most Mizrachim were employed; by way of contrast, most Ashkenazi workers benefited from civil service employment or membership in kibbutzim or the Histadrut labor federation.  For cultural reasons, few Mizrachim joined a kibbutz and few could afford the membership dues to join the Histadrut at that time.

By the time a similar recession hit during Yitzhak Rabin’s first term as prime minister in the mid 1970s, the government had instituted unemployment insurance and provided other measures designed to soften the blow for the mostly Mizrachi working class, but this was too late politically, with Menachem Begin’s nationalist rightwing bloc making decisive strides to win over their votes.  (One surprise finding of Elmaliach’s research is that the Mizrachim did not massively desert Labor for Likud until the 1970s.)

Since the author ends his analysis in 1977 with Likud’s rise to power, he misses the final period of MAPAM’s existence, when it broke with the Labor Party to oppose Israel’s invasion of Lebanon in 1982, and did not renew its alliance with Labor in the unified electoral slate of the Labor Alignment.  Labor balked at Ariel Sharon’s expansion of the war to Beirut, but had previously backed a limited operation to push Arafat’s PLO forces away from Israel’s northern border.

Somewhat typically for MAPAM, the movement gave its adherents a complicated message.  Whether they were older reservists called up for the war or younger members doing their initial army service, members of the party or its aligned kibbutzim were advised to serve with their units on the frontline, and then to join the demonstrations being mounted against the war, when on leave.

A large grassroots Israeli peace movement began during the first Lebanon war; as once noted ironically by the late Prof. Edward Said, Tel Aviv was the only place in the Middle East where there was a massive protest against the slaughter of Palestinians in two refugee camps by a Lebanese Christian militia, allied with Israel.  MAPAM pressed its nuanced position that the integrity of Israel’s armed forces was vital for the country’s survival, but as citizens of a free country, they could act politically to change Israel’s policies.

Some members of the Kibbutz Ha’Artzi took a more consistent position against the war and advocated refusing to serve.  They broke with MAPAM to become active in a small, ultimately fringe leftwing political party known as Sheli.  The Lebanon war of the 1980s and ‘90s, which transformed from a conflict with the Palestinians to a war with the new Lebanese Shi’ite Hezbollah movement, was the first time that Israel’s national consensus broke down.  It was also the first time that MAPAM lost the support of some members of its own kibbutz federation.

MAPAM ended its independent existence by merging into the new Meretz party during the 1990s. As Meretz, it remains the most clearly identified leftwing pole of the wide spectrum of parties and currents that consider themselves Zionist.  It has consistently advocated for an equitable two-state solution with Palestinians in the West Bank and Gaza Strip, while simultaneously defending the rights and participation of Arab citizens within Israeli society; most Meretz activists back Israel as both a state for Jews and for all its citizens.  It remains to be seen whether Meretz can maintain itself against the crosscurrents of competing nationalisms, but as long as it endures, the legacy of MAPAM continues.