Bob and Carol and Ted and Alice are Back, and the Sexual Revolution with Them 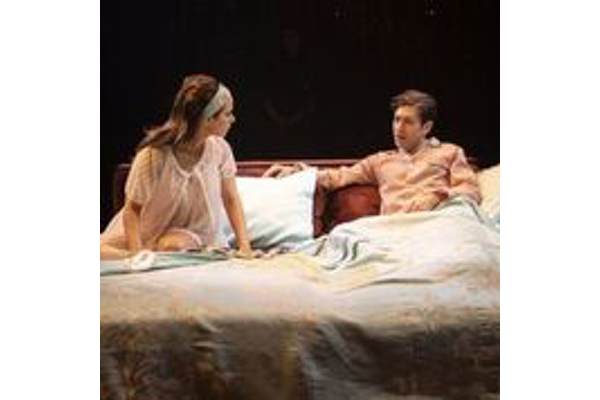 The late 1960s was the heyday of America’s sexual revolution and nowhere was it bigger than in California and nowhere in California was it wilder than in the bedrooms of Bob and Carol and Ted and Alice, two married couples who went to a sexual awareness seminar. There, they learned free love was the name of the game and plunged ahead.  Sexually energized, they dove under the sheets with anybody who was breathing.

Their fictional life became a hit movie in 1969, directed by Paul Mazursky. This fall was the 50th anniversary of the film and now The New Group, in New York, has turned it into a musical, Bob and Carol and Ted and Alice. If you saw the movie, you will love this play. If you did not see the movie, you will still love this play. It is uproariously funny and is an X-rated (sort of) look at what was a very new sexual atmosphere in America in 1969.

The play, that opened Tuesday at the Pershing Square Signature Theater on W. 42d Street, New York, is now a musical and Grammy winner Suzanne Vegas sings most of the songs as the “bandleader.” The songs are OK, but, frankly, there are too many of them. More dialogue would have been more useful.

The play, written by Jonathan Marc Sherman based on the movie script, starts when Bob, a film maker, goes to San Francisco to do some work and has an affair with a graduate student he met there. He is so proud of his sexual awakening with the girl, 24 to his 35, that he rushes home to tell his wife all about it. This is all right with her. She then begins an affair with her tennis club’s pro. This is perfectly OK with Bob (I don’t know about that.)

After those two sexual adventures, Bob and Carol and Ted and Alice slowly start to give each other the eye. Will the fearsome foursome swap partners?

This play about sex is very indecent without ever being indecent. The idea of sex is in your head right from the start, but there is no nudity or simulated sex, just a lot of suggestions.

What this is, really, is a romp. Pillows and sheets and well, other things, fly through the bedroom amid arguments between the four and a lot, and I mean a lot, of sexual tension.

This 50-year-old story unfolds as if it were written yesterday. The playwright has written a sharp, bold comedy laced with sexual antics that is genuinely funny.

Do these 1969 era sexual circuses still take place today? Sure, they do. There have been documentaries and magazine articles on them. Are they right now? Were they right in 1969? Who knows?

The strength of the play is that these friends remain so throughout the story and continually forgive each other for their transgression. There is an expression today, “friends with benefits.” That certainly would have applied to this quartet.

The director of the musical, Scott Elliott, must be given considerable credit. The play is set in a stage surrounded on three sides by the audience. Members of the audience are close enough to, well, touch a towel. Elliott’s genius is making the audience part of the play and yet a step back from the play. It works. He keeps the actors moving on and off the stage through the aisles at a brisk pace, towels flying. There is never a dull moment in the comedy.

Elliott gets fine performance from Bob (Joel Perez), Carol (Jennifer Damiano), Ted (Michael  Zegen), Alice (Ana Nogueira) and the singer (Suzanne Vega), plus Jamie Mohamedein. They are bold, brave and very funny. You are appalled by their sexual activity at first, but they grow on you and by the end of the play you see them is a soft, but rather unorthodox, light.