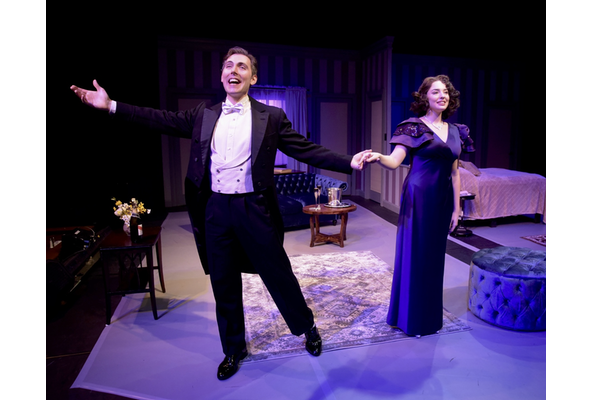 It is 1934, at the height of the Depression, and an opera company in Cleveland is trying to make enough money to stay in business. The answer, its officials believe, is to bring in fabled Italian tenor Tito Merelli for a one-night concert. Merelli’s appearance is highly publicized and the theater is sold out. The opera company has a stage set. It has an orchestra. It has an audience. But it has no Merelli. He is missing.

In late afternoon, just a few hours before the performance, the distraught opera company’s manager takes a bold step. He will use Max, his assistant and an amateur tenor, to dress as the clown Pagliacci and do the show as Merelli. With all the makeup and man in disguise with a tenor’s voice, and also about the correct height and weight, who would know? What could possibly go wrong?

That’s where everything starts to collapse in this play set in 1934, Lend Me a Tenor, that opened last weekend at the Westchester Broadway Theater in Elmsford, N.Y. It is a wacky, crazy, upside down play by Ken Ludwig that has the audience roaring with laughter. This tenor can hit all the high notes and makes everybody laugh, too. He is his own opera company – if he can be found.

Lend Me A Tenor is not only a hilarious show, well directed by Harry Bouvy, but a neat look back at how opera singers and other highly regarded performers toured the country in that era. Merelli lived when they left their homes in the U.S. or in Europe and went on tours of America or appeared in different cities at different times of the year. The play captures the physical details of the traveling star’s Depression life well.

Star tours were very common in the Depression, despite the sagging national economy, that hurt theaters and opera houses as badly as it hurt everything else. Bringing in a star for a one-night performance usually worked not only to put money in the opera house bank, but garner enormous attention for the opera company which translated to ticket sales for the company’s regular operas. Marian Anderson, the great singer, toured the U.S almost every year in the late 1930s, sometimes taking tours that lasted several months an included up to eighty concerts.  The big bands of the era - Duke Ellington, Glen Miller, the Dorseys - did the same thing, hitting the road early in the year and living out of suitcases for most of it. The casts of Broadway shows also traveled in that manner. There were always logistical problems- train breakdowns, snowstorms, ticket mix-ups, but, in general, the tours worked well.

Except for Tito Merelli.

He and his wife have enormous problems to combat when they finally do arrive in Cleveland (Tito’s main problem is his firecracker wife). How do you un-vanish? How does Max, bursting for a chance in the musical spotlight, cope with the fact what Tito is, in fact, in Cleveland? Or is he? Is anybody really in Cleveland?

In Lend Me A Tenor, the Cleveland Opera Company has rented a palatial, two room suites for Merelli and his wife, an adoring bell hop brings up their bags and the opera company’s manger treats him like visiting royalty. All of this is historically accurate. Performers arrived by plane or train, mostly, although some went by car. They ate well in the hotel’s restaurant, were given tours of the area ad introduced to dozens of artistic and municipal officials. Newspaper ads for Merelli would have been taken out for a week or more prior to the show. Hundreds of large, cardboard broadsides would have been put in store windows or nailed to trees and telephone poles. There might even have been a Tito Merelli Day (that is, if they could find Tito).

Everything that show business people did to arrange an overnight stay and performance for a star like Morelli in 1934 was done year after year and became the backbone of the American Tour. It is the same way today although social media, television, emails and i-phones have modernized the tour. Tito Merelli would love the contemporary tour, if he could find it.

Director Bouvy, who pays such careful attention to the history of the play, has done a superb job with a talented cast of actors. He lets them all shine as a very group of the eccentric, egomaniacal show biz people we all know and love. The two stars of the show are Tito, played wonderfully and with great style by Joey Sorge, and Max, played equally well by J.D. Daw. In addition to them, Bouvy gets fine work from Molly McCaskill as Maggie, Max’ girlfriend, Philip Hoffman the opera manager, Kathy Voytko as Tito’s wife, Tregoney Sheperd as the doughty opera company board chair, Hannah Jane McMurray as a soprano, Sam Seferian as the bellhop and John Savatore as an assistant stage manager.