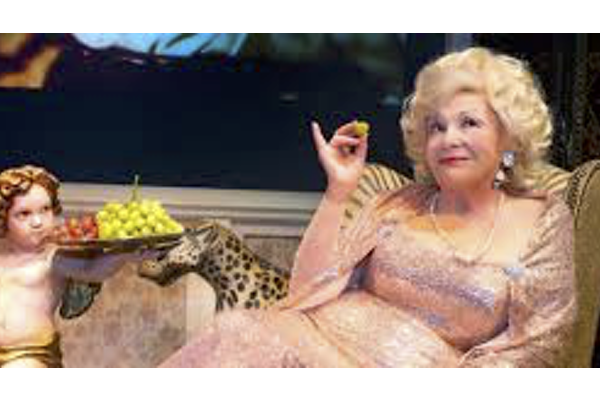 One of the first photos you see in Renee Taylor’s delightful play about dieting is a black and white picture of her as a chubby kid in New York in the late 1940s. In hundreds of subsequent photos and videos, Taylor, the unforgettable mom of Fran Drescher in the hit TV series The Nanny, tells the story of her life and all the diets she has been on, real and crank, medical and fanciful. It’s about caloric food you can bake and a LOT of chocolate cake.

Her story is told in her engaging one woman show, My Life on a Diet, that just opened at the George Street Playhouse, in New Brunswick, N.J. The play is the story of her career in show business, marriage (53 years) to actor/writer Joe Bologna and a world of calories. As she says, it’s a story of her highs and lows, on and off the scale.

In her story, told as she sits at a desk in her home, she tells the rather remarkable tale of all the famous celebrities she knew as friends and lovers. Each has a number of anecdotes attached. Lovers included brilliant off-color comic Lenny Bruce, who overdosed during his relationship to her, and friends Barbra Streisand and, most importantly, Marilyn Monroe.

She met most accidentally.

Taylor enrolled at the Lee Strasberg Acting School in New York in the 1950s to become a performer. Sitting in class with her was Marilyn Monroe, who was just becoming famous. Taylor had no qualms in befriending Monroe and Monroe saw in her a level headed, down to earth friend that she desperately needed. The two hit off right away and remained pals for years.

Taylor rose from bit movie player to c-star of some movies and became a television star in several shows and then The Nanny. Through it all, she constantly a waged war against weight, fighting all the way to keep it down, and often failing. The play starts off as a standard Hollywood story but as it goes on you feel real empathy for her and her waistline combat.

Renee had personal struggles, too. She dated a lot of men before meeting Bologna, and they had a tempestuous, marriage counselor filled marriage. Her good friend Marilyn died young of an overdose of pills. Lenny Bruce overdosed, too. You begin to see Taylor as just like any other human being, with lots of troubles, grieving over the losses of friends as we all have, and not just a glitzy Hollywood star. It’s a humanity that develops right through the end of the show and makes her lovable.

Oh, the endless diets. They are funny. She makes up celebrity diets and recounts tales of famous people she met who went crazy over diets, such as Jackie Kenney’s sister, rail-thin Princess Lee Radziwell. “The woman walked up to a gourmet delight buffet table an ate three little carrots for dinner. I leaned over and said to her, oh, such overeating…”

There was 40’s box office Queen Joan Crawford, whom she met with her slightly nutty mother Freida. Mom told Joan she had to work harder at body cleansing diets to save her health and Crawford, with a long nod, said “I’m doing that.”

Taylor’s story is familiar to any one who has been on a diet. She always weighed herself after getting up and before breakfast. “I also fixed the scale before I got on it,” she laughed.

You have to admire her for battling against her weight and remaining sane in Hollywood over such a long time. We all know what a crazy life show people have – too much eating and drinking, drugs, love affair, on and off employment, shrinks, always waiting for the next job. What do you do? You eat.

The play is warm and loving. It is a memoir of sorts with her as the center. It is not a drama or high comedy or sprawling spectacle, either, but it is good – as good as a big, calorie ridden holiday dinner, with a big dessert cake, please – large slice.

PRODUCTION: The play is produced by the George Street Playhouse. It is written by Taylor and Joe Bologna, and directed by Bologna. Sets and Lighting: Harry Feiner, Projections: Michal Redman, Costumes: Pol’ Atteu, Sound: Christopher Bond. The show runs through December 15.