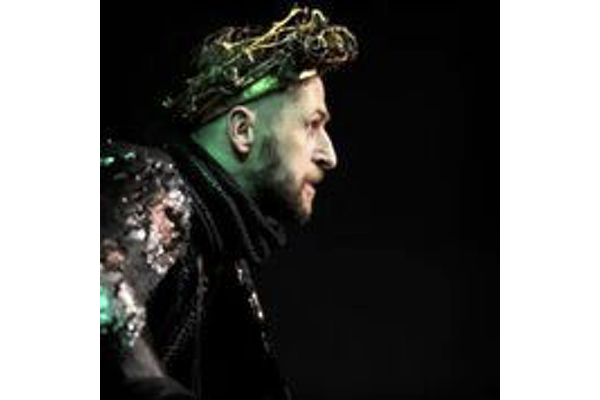 William Shakespeare’s bone-chilling play Richard III portrays England’s deformed monarch as a murderous thug, one of the great villains of world history. That portrayal is underlined yet again a new production of the play that opened last week at the Gerald Lynch Theater of John Jay College in New York The play, staged by Ireland’s DruidShakepeare company, is part of the White Light Festival sponsored annually by the city’s Lincoln Center. The play stars Aaron Monaghan in a scalding, searing performance as the duplicitous, arrogant and diabolical Richard, who marched to the throne amid a long series of bloody murders and executions conducted on his orders.

The blood-soaked drama, that has been staged thousands of times, is one of Shakespeare’s great plays and here, at Lincoln Center, is a splendid production of it, an absorbing staging that builds the drama and tension of the tale as it unfolds in all of its treachery and gore.

The play starts just after the two major houses in England have ended a long war. Richard, a young royal hobbling about on his canes, miserably dragging himself around the royal court, plots to become King. He hires some ambitious friends and has them do his dirty work for him. Slowly but surely, Richard climbs up the power ladder and takes the crown (he puts it on his own head, a la Napoleon several hundred years later). He battles the men in his kingdom, but he battles the women, too, even killing a few. He has horrific confrontations with his mother and the mother of some men he had slain. He denies culpability most of the time, putting the slayings off on someone else. When he does admit his guilt, he tries to convince the women that he was right and that, oh well, he’ll marry one of their daughters to make up for it.

As the play unfolds, we meet numerous characters, good and bad, all caught up in the gory hurricane Richard has unleashed. Most of them don’t survive it.

The wonder of it all is how on earth RIchard did not expect the friends and relatives of those he had murdered, at some point, to come after him.

The play has a streamlined cast (sometimes 50 people appear in other productions). Director Garry Hynes does a laudable job of running the play and mixing solo appearances by Richard at some points and Richard in groups in others. She gives Richard a lot of humor and at times has Richard paint himself as a victim of some sort and a royal whose only goal is to united the troubled kingdom and move on peacefully with all.

Richard III is not for everyone. It lasts about three hours and the plot is extremely complicated. You need a scorecard to keep track of who is backing who, who is conspiring against who and who is being butchered in the King’s name. The most famous murders in the play, of course, are those of two children, Richard’s nephews, Edward V and Richard of Shrewsbury, whom Richard III fears. He has them carted off to the Tower of London and then slain. There are so many murders going on in the play, one right after the other, that the boys’ executions sad as they are, get a bit lost in the story, mere historical road kill. You’ve got to have a stomach for blood and violence, too. Richard III makes Tony Soprano look like the President of the local Chamber of Commerce.

Is Richard III historically accurate? Not really. Richard suffered from scoliosis, a physical condition in which one shoulder is lower than the other and causes an odd walk. He was not a hunchback with a withered arm, as Shakespeare portrayed him, and did not drag himself around, leaning on two canes, as most of the actors who have played him, including Monaghan, do. He was involved in some royal chicanery but did not commit all of the murders that Shakespeare attributed to him (the Bard was heavily influenced by the Tudor age in which he lived), although British historian are still out on the murders of the two young boys. When Richard first appears in the story he appears very broken and, referring to himself, scowls to the audience, “thou lump of foul deformity.” He blurts out, too, in the first few minutes of the play, that he has set himself on a path of destruction to claim the crown and keep it. He does just that, too, with a nasty group of henchmen.

There was royal turbulence in Richard’s era and the real Richard was caught up in it. The crown changed hands four times in just 22 years and in some of those years Richard had to live outside of the country for his own protection.

Hynes also does a fine job of showcasing the sweep of Shakespeare’s drama, giving the audience a deep and rich look at the royal court in that era. There are also a number of fine battle scenes at the end of the play, where Richard, in mortal danger, shouts that famous line “a horse, a horse, my kingdom for a horse.”

Director Hynes gets a memorable, truly memorable performance from Monaghan as Richard, but she also gets good work from a talented ensemble cast.  Some of the fine performances are by Garrett Lombard as Hastings,  Marie Mullen as Queen Margaret, Rory Nolan as Buckingham, Marty Res as Clarence,  Frank Blake as Dorset, Bosco Hogan as King Edward IV, Jane Brennan as the Duchess of York and John Olohan as Stanley.

They all work to give the audience a memorable play and a fine looking at British history.