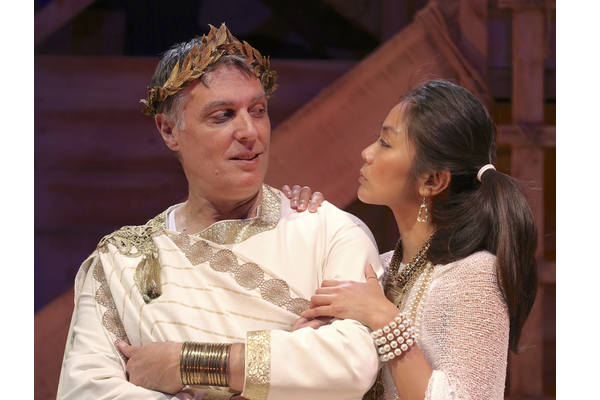 In 1898, famed playwright George Bernard Shaw decided he wanted to write a play about Julius Caesar’s relationship with Egyptian Queen Cleopatra. He was not happy with all the previous versions of their story, including William Shakespeare’s Julius Caesar and piles and piles of history books. No, he wanted a new story, his story, and wrote Caesar and Cleopatra.

The story is great fun but, er, pretty much invented and not that close to the truth.

In it, Caesar does not romance sultry young heartthrob Cleopatra. He does not bed her, kiss her or even tag her on Facebook. The Queen, one of the most powerful women in the history of the world, is totally controlled by her maid, Eeethratatama, or something like that. Cleo yearns after Mark Anthony, Caesar’s military chief of staff, before she even meets Caesar himself. Her brother and co King, Ptolemy, 12 years old at the time, duel for years over who should run the country. Everybody runs up and down the stairs, gasps a lot and sneers.

It is a lot of fun, but nowhere near the true story. Cleo and Caesar did have a son and there were not a lot of storks flying about the Nile in those days.

Why is the history stretched so thin? Shaw had hundreds of books on the pair to research, didn’t he? Well, he did, but he picked Theodor Mommsen’s 1856 work History of Rome. In it, Mommsen invented his version of Caesar, so different from the real Julius. Shaw liked Mommsen’s view and wrapped Caesar, and Cleopatra, in it for his play. Why? Who on Earth knows?

The distorted history play, a rather wacky version of the story of the Roman cictator and the Egyptian beauty, opened Tuesday at Theatre Row, on W. 42d Street, New York. It is zany, confusing, off beat to be sure and full of laughs for the audience, that sits there wide eyed, trying to absorb the rather complicated story.

If you want to just sit back and laugh, though, Caesar and Cleopatra works well. It is bawdy, sophomoric, forced and has a lot of really unusual situations. It’s not a good play, but it’s a good night at the theater and a lot of chuckles. This play, penned before the turn of the last century, is very much like a modern Saturday Night Live skit. All it needs is a band.

Folks you never saw Egypt this way, not for a moment.

The play opens in a marvelously decorated theater (they just renovated Theater Row and the complex looks wonderful). The usher hands you a newspaper with stories about Caesar and Cleo, along with a brochure describing the background of the play and a ghastly sketch of playwright Shaw.

Then, as you walk in, your eyes spot half a dozen large EXCAVATION STE broadsides. You sit down and stare at a construction set up on stage with half-finished walls and wooden stairs. Apparently, the contemporary Egyptian Archaeological people have stumbled upon something and it is the old story and the play.

A moment later, Cleo’s vivacious maid, Etatateeta (don’t try to pronounce it), takes center stage in one of the chicest white pants suits you, or Julius Caesar, ever saw. She spins the beginning of the tale, setting up the two main characters, their battle, Cleo’s kid brother Ptolemy (Ptolemy is played by a large puppet).

The story: Caesar has arrived chasing his military enemy, Pompey, whose has been murdered by Pompey’s men, but in the play, you don’t know that. Caesar then meets Cleopatra (she does NOT roll out of a rug here). She wants his army to help her crush Ptolemy’s army, that is fighting Caesar’s army, that is part of Mark Anthony’s army, that has re-enforcements somewhere that are always on their way and there are ships and explosions and fires and thousands of men fighting – all very messy.

The play is fun. There are audacious characters, led by hyperactive teenybopper Cleopatra herself. Then there is Appolodorus, “the Sicilian,” who bounds about the stage for two hours, Pothimus, an elderly adviser who gives everybody bad advice, and Caesar’s two aides, Rufio and Brittanius, who talk too much and aid too little.

Shaw just insists, over and over again, that Caesar had no romantic or sexual interest in Cleopatra and wastes countless minutes showing him as her “mentor” in an effort to get her to be a wise and good ruled. Let me get this straight -a guy has no romantic interest in a  well-dressed rich woman with a lot of land and chests full of gold who was so good looking that Hollywood had to get Elizabeth Taylor to play her?

You’ve got to admire director David Staller. He keeps a tight rein on a story that might go off the 32d Dynasty rails at any moment. He gets fine acting from Brenda Braxton as maid Etatateeta, Robert Cuccioli as Caesar, Teresa Avia Lim as Cleopatra, Jeff Applegate as Rufio, Jonathan Hadley as Brittanius, Rajesh Rose as Pothimus and Dan Domingues as Appollodorus.

Is the play different? Oh, yes. Is it funny? Yes. Is it worthy seeing? Up to you.