All for One and One for All! The Three Musketeers Ride Again 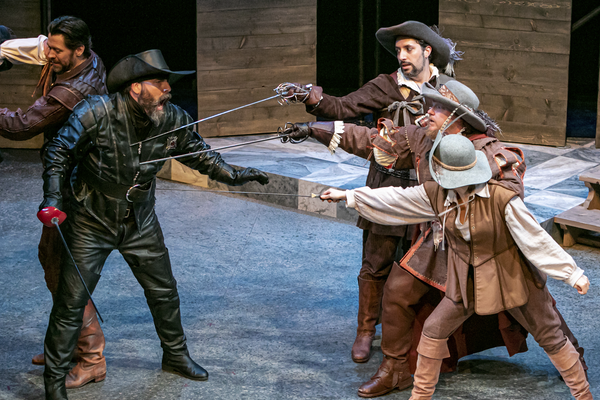 There are few greater heroes in history, real or imagined, than French novelist Alexandre Dumas’ swordsmen in The Three Musketeers. They were that daring trio – Aramis, Athos and Porthos – and their pal D’Artagnan - who fought for France and her King in the seventeenth century, putting their lives on the line for him every day. The boys have been the stars of countless movies, television films, books comics. Board games and even cartoon shows all over the world. Their glory never fades. Now they are back again, on stage, in Ken Ludwig’s The Three Musketeers at the New Jersey Shakespeare Theatre, Drew University, Madison, New Jersey. It is a rollicking good show about 1620s France with dazzling sword fights, torrid romances, friendship and loyalty. The Musketeers, swords in hand, hats tilted just so, would love it. So, will you.

Dumas’ novel The Three Musketeers was first published in 1844 and has sold millions of copies since. It was one of the world’s first films in 1903 and has been a favorite of writers, directors and Hollywood stars ever since. The story has been made into more than forty movies. It has been a cartoon and even a board game. Disney’s Mickey Mouse, Donald Duck and Goofy even play them in one movie and the doll Barbie managed to star in another.

The Musketeers were very real historical figures. They were founded in 1622 by King Louis XIII of France, who wanted a personal security force that served as part of the army. The King insisted that all of them be in terrific physical shape and trained to be superior soldiers (they were France’s version of our Navy Seals). He was nervous because his Catholic monarchy was continually at war with the Huguenots, French Protestants. Louis’s father had been assassinated.

Novelist Dumas said he stumbled across the King’s Musketeers in his research. He based his musketeers on real life musketeers. D’Artagnan was actually Charles de Batz Castelmore.  Porthos was Isaac de Portau. Aramis was Henry d’Aramitz. Athos was Armand de Sillegue. King Henry XIII was real and so were Richelieu and the Queen, Anne of Austria. Lady De Winter was a real person, but not involved in the life of the court. The fictionalized Dumas’ story is set amid this real historical landscape and very real people. The only real change Dumas made was to set the story in the 1620s and not the 1640s, when the actual Musketeers served.

What is impressive about the play, that opened Saturday, is that playwright Ludwig quickly sets the table and tells you the story of the three musketeers, D’Artagnan and D’Artagnan’s sister Sabine, added to the story by Ludwig. That’s just in case you forgot the tale or the characters. In just five minutes, you are on your horse, sword in hand, and ready to ride into history.

The story is simple and yet at the same time complex. The Musketeers fight for the King, Louis XIII, and there are soldiers who fight against the King for his religious rival, the powerful and quite evil Cardinal Richelieu, the King’s chief advisor. The Cardinal wants to dethrone the King and get rid of the Musketeers. They want to defrock him. It all comes to a merry head when the Queen of France gives an expensive necklace to her boyfriend, a British nobleman. The Musketeers charge off to Britain to get it back, but so does Lady de Winter, the Cardinal’s duplicitous niece. They are thwarted again and again and it is not until the very last minute that you find out if they succeeded, and who, after numerus swordfights, is left standing.

The play is a good adventure, says one of the Musketeers. He is wrong. It is a terrific adventure, a fine rumble in the European courts and a barn burner of a tale that pits good vs. evil at every turn.

The play is masterfully directed by Rick Sordelet. He is actually the “fight director” for the theater. Now, with the fight director in charge, there are fights all over the place. There are more sword battles than there are Democratic Presidential contenders (that’s a lot of sword fights). Sordelet gets wonderful performances for all of his actors. Cooper Jennings as D’Artagnan and John Keabler, Paul Molnar and Alexander Sovronsky as the three musketeers are marvelously gifted actors and perfectly heroic characters. The new girl with the sword, Sabine, played well by Courtney McGowan, is an OK character but no real addition to the story.  She accompanies her brother to Paris to see him join the Musketeers, urged to do so by their dad, a former Musketeer himself. Other fine performances are by Bruce Cromer as the always agitated and forever scheming Cardinal, Fiona Robberson as the Queen, Anastasia Le Gendre as the lovely and dangerous Lady De Winter and Billie Wyatt as Constance. Michel Stewart Allen absolutely steals the show whenever he is on stage as the pompous, jealous, ditzy, so very full of himself King Louis XIII (no wonder the whole country went to hell shorty afterwards). He prances, he dances and he (badly) romances. He is a delight. Long live the King!

The play, and novel, offers you a good look at French history in that era. The novel includes actual wars and attacks by the Musketeers, but the play really does not. You learn much about the court of Louis XIII, although there is little mention of his reign from the age of 9 to adulthood.

See The Three Musketeers. It is a sizzling tale of derring-do, adventure and a solid piece of French history.