The Price of Thomas Scott is Pretty High 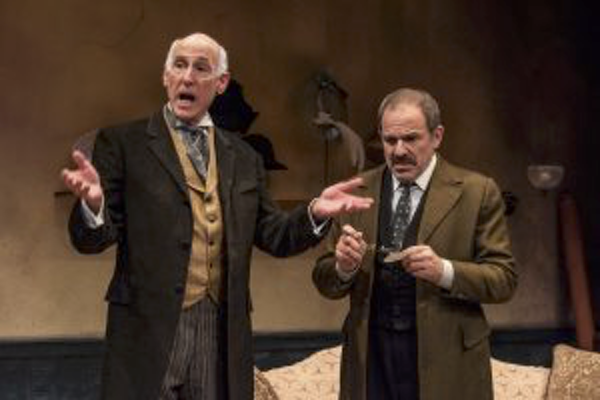 For years, British drapery store owner Thomas Scott and his family dreamed of selling the store and house attached to it and using the money to follow their dreams. Scott’s wife wants to move to a high-end suburban town, his son wants to earn a job as a government auditor and his daughter wants to move to Paris and work for one of the world’s great millinery shops. They nearly sold the store several times, but the sales always fell through. Now, finally in 1913, Mr. Wicksteed arrives from the Courtney Company and he wants to purchase the building. He offers Scott an enormous amount of money, far more than expected and more than enough to pay for the dreams of everybody in his family. The problem is that the Courtney Company runs a chain of dance halls and wants to make Scott’s drapery store one more of them, clinging couples, night long drinking and wild music included.

Scott hates dance halls. He finds them morally repugnant, the scourge of Great Britain and the “Devil’s work.”

What should he do, take the big pot of money, hand over the keys and please everybody in his family or turn down the offer and please his conscience?

That’s his problem in The Price of Thomas Scott, a fine 1913 play by Elizabeth Baker that is being revived long after its British premier. The play, nicely directed by Jonathan Bank, is a delightful look at the millenary business just after the turn of the 20th century and the men and women who work in it. The drama is a sturdy look at the lives of women in that era and shows how thousands of them found work in millinery and other women’s’ shops, creating a whole new underclass of fashion workers.

The play is full of skilled actors who deliver fine performances in the play, which is part of an 18-month long tribute to Ms. Baker, who was an early sensation as a playwright in the 1909 to 1920 era, but faded from view over the years.

Thomas Scott is played well by Donald Corren, who races about the stage, sales contract in hand, debating what he should do. His wife Ellen is played smartly by Tracy Sallows as joyful and mournful as she worries about what decision her husband will make. Daughter Annie Scott is played well as the Paris dreaming milliner by Emma Geer. The dashing and charming Wicksteed is played by Mitch Greenberg, Others in the talented ensemble are Nick Medica, Mark Kenneth Smaltz,  Jay Russell, Andrew Fallaize Josh Goulding,  Avana Workman and Arielle Yoder.

The play opened last night at the Mint Theater, housed at Theater Row on W. 42d Street. The Mint revives plays from the first half of the 20thcentury, finding chestnuts here and there that for some reason did not enjoy longs runs or were forgotten by theater lovers over the years.

Ms. Baker is one of those forgotten playwrights. A typist, she burst into the spotlight with her play Chains, about shop girls and their troubles, that debuted in 1909. She received much attention and wrote a succession of successful plays, including The Price of Thomas Scott. Right after that, she faded in popularity and penned her last drama in 1932, taking time off to live in a hut on a South Pacific Island, pounding away on her typewriter under a thatched roof.

Now the Mint has brought back Ms. Baker.

The Price of Thomas Scott sets up the dance hall (the Devil) vs. simple street life (God), but there are numerous subplots involving the children and wife of Scott, a very conservative businessman, and the men in his circle who are all reformers of some kind. It is, like Baker’s other plays, a vivid story about the ordinary lives of ordinary people, with all of their tension seething beneath the surface.

The play is also a nice historical look at middle- and working-class England in 1913, a country just invaded by the automobile and a country battling for fashion supremacy in Europe. Under all of that in the UK, as in the U.S. are the armies of millinery girls and shop girls who really were the machine of the fashion industry in that era. No Guccis, Versaces, St. Laurens or Valentinos to be seen anywhere.

The play does have its problems. The first twenty minutes are terribly slow moving. Wicksteed’s arrival at the shop finally gives it the jolt of electricity that it needs. Some of the subplots are a bit thin. Scott’s connection to his buddies seemed a little hollow. His son gets lost in the shuffle. Scott himself is not as defined as he might be.

Despite those weaknesses,The Price of Thomas Scott is certainly worth the price of admission.