Culture Watch
tags: Metropolitan Museum of Art, Everything Is Connected, Art and Conspiracy 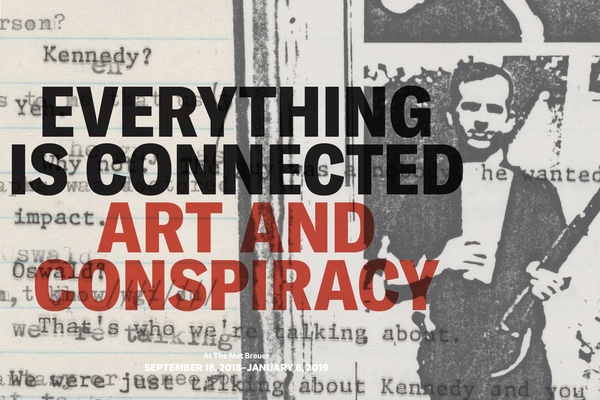 I have a friend who was a high school student when Lee Harvey Oswald shot and killed President John F. Kennedy in 1963. Since then, I think he has read every single JFK assassination book ever written and has a conspiracy involving Kennedy’s murder for every day of the month. He is not alone. America is the land of conspiracies, one deeper than the other.

It is not a surprise that so many historians, political scientists and journalists have written extensively about conspiracies over the years, but it is surprising to see that artists are boldly chasing the shadows in the night, too.

That’s the theme of “Everything Is Connected: Art and Conspiracy,” the new exhibit that just opened at the Metropolitan Museum of Art’s Breuer Building on Madison Avenue, in New York. Thirty artists have contributed over 70 works, very large and very small, to the exhibit, a rambling study of conspiratorial political plots and sub-plots on several continents that covers an entire floor of the museum. The colorful pieces in the exhibit, from a whole wall painting of a small-town gas station with a secret door to a darkened interior to an artist’s rendering of Ronald Reagan's diplomatic orders to tapes of conspiracy phone calls from President Richard Nixon to Secretary of State Henry Kissinger in the early 1970s, jolt you. A Met Museum official says the exhibit is “the archaeology of our troubled times” and it really is, and a highly entertaining archaeology, too.

Sheena Wagstaff, the museum’s chairman of contemporary art, said that “we present modern and historic art in unexpected, experimental and sometimes provocative ways in this exhibit. The curators drop a plumb line into the subterranean depths of conspiracy, illuminating the deep, arcane corners of suspicion that are so prevalent in these works.”

The artists pull no punches, charging the media, the CIA, FBI, federal agencies and city and state police with conspiracies, cover ups and murders.

The exhibit, whose curators are Doug Eklund and Ian Alteveer, assisted by Meredith Brown and Beth Saunders, has a conspiracy or cover up for everybody, ranging from the murder of Kennedy to the Abu Ghraib Prison cover up to the CIA’s LSD experiments. There is a conspiracy that linked the U.S. government to Henry Kissinger to the murder of Salvador Allende, the Chilean socialist, in the 1970s (the curators cleverly line up four Time Magazine covers of Kissinger and then one of Allende next to them). There is a wall chart of New York real estate managers who are somehow connected to some sordid tenant rent plot. There is a video theater that presents a slide show of an always under construction mansion owned by Sarah Winchester, heir to the gun fortune, who believed the ghosts of those killed by her husband’s guns were after her. When she died there were 150 rooms and who knows how many ghosts in it.

There is a poster of Ronald Reagan with the title AIDSGATE on it to show that he did not do enough to try to cure AIDS. A wild painting, in luminous color, shows someone with Hitler’s brain, stolen by conspirators.

I got a chuckle out of Jim Shaw’s 1978 work that showed pictures of his friends and then, next to them, Jim’s rendering of how they really looked under their skin – as invading Martians. He got the idea from supermarket tabloids that charged thousands of Martians were running around in human skin, one big outer space conspiracy.

Two very disturbing, and brilliant, works stopped me in my tracks as I walked through the exhibit. One was a huge dollhouse designed by Sarah Anne Johnson with lighted rooms inside. It depicted all the rooms in which her grandmother, Velma Orlikov was reportedly unknowingly given huge doses of LSD over a long period of time in the 1950s as part of a CIA research program.

The other was the “educational complex" model by Mike Kelley in which the McMartin pre-School, in Manhattan Beach, California, is supposed to be represented. Teachers in that school were believed to have been involved in a conspiracy to convince children to charge adults with sexual molestation. The conspiracy caused a big scandal as parents feared all pre-schools. You remember that one.

Some of the exhibits are, well, weird. In one, groups of artists from the California Institute of the Arts have set up a spooky graveyard in the desert full of tombstones, with a scary orange sky over it. In the middle of it is a television set showing a video of people dressed as mummies battering each other with bouquets of flowers. Huh? In another, an artist shows a copy of a science fiction magazine, “Amazing Stories” and tells the tale of how a magazine writer published in it swore that his army of inner-earth monsters really existed, all covered up, of course.

The media is always charged as being an accomplice to conspiracies. In one exhibit, a long line of newspaper and magazine front pages and covers with everything whited out except a photo of slain former Italian Prime Minister Aldo Moro, kidnapped and killed by the terrorist group The Red Brigade, is shown as a way in which the media helps the assassins. Many newspaper pages are covered over with art works. Time magazine is featured in several rooms. Journalists should not worry though, because another artist says that major government officials, such as Nelson Rockefeller, were secretly tainted by museum workers (who knew?).

The centerpiece of the conspiracy show is Lee Harvey Oswald. The Oswald exhibit is fascinating, but not just because of the two rows of large photos and drawings of Oswald, many of him in that famous photo where he holds the rifle that killed the President in his backyard. The intriguing thing about the exhibit is that the artist, Wayne Gonzalez, was actually born on the same New Orleans street as Oswald and knew Jim Garrison, the District Attorney who led that well publicized conspiratorial search for other killers of Kennedy. Gonzalez also displays his version of the photo of Oswald being shot by Jack Ruby. Yet another artist, Lutz Bacher, put together “The Lee Harvey Oswald Interview,” in which the artist pretends to be Oswald and offers quotes amid drawings of the assassin.

There are several exhibits on 1960s and ‘70s Black Panther Party, the target of the FBI and other government agencies. One is an artist’s depiction of six covers from that group's newspaper and another is a video of a press conference of Panther leader Fred Hampton, in which he rambles on about the police and the fascists who were out to get the Panthers.

Running at the main Met Museum on Fifth Avenue is Jane and Louise Wilson: Stasi City, which has four television channels that you can watch that show the headquarters of the Stasi, the old East German secret police organization.

Some of the conspiracies in this innovative and absorbing show are real stretches, but they are portrayed well by the artists and make you think about conspiracies in general. Some are right on target. I mean, who was the gunman on the grassy knoll. Right?

When I left the museum, I passed two security guards deep in a conversation about New York’s two NFL football teams, the Giants and Jets. Ho! They can’t fool me. The names of the teams were clearly code words in a massive international plot orchestrated by the CIA (United States), MI5 (Great Britain) and the Mossad (Israel) to hunt down the remaining units of the Irish Republican Army. In the security guards’ conversation about the NFL I also heard the word” Patriots” and that confirmed the politics of this conspiracy for me.