Review of David Rapp's "Tinker to Evers to Chance: The Chicago Cubs and the Dawn of Modern America" 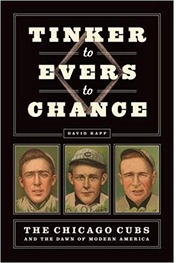 Now that the World Series is over, baseball historians are already at work trying to determine where the 2018 Boston Red Sox, winners of 108 regular season games and 119 altogether, rank among the best teams of all time.  The most recent entry:  the 1998 New York Yankees, winners of 114 regular season games, who then went 11-2 in the postseason.  And, of course, there are the 1927 Yankees, Murderers’ Row, featuring Babe Ruth and Lou Gehrig, who won 110 games (out of 154), then swept the Pittsburgh Pirates.

Veteran Boston Globe sportswriter Bob Ryan thinks the 2018 Red Sox may not even be the best Red Sox team ever:  he nominates the 1912 edition, which featured Hall of Fame centerfielder Tris Speaker, who hit .383., and pitcher Smoky Joe Wood, who went 34-5 with a 1.91 ERA and pitched 35 complete games.  That team won 105 games and lost only 47 in the regular season, then defeated John McGraw’s New York Giants in eight games (Game 2 ended in a tie).

As long as we’re going back that far, however, let’s move to the heartland and consider the Chicago Cubs of the 20thcentury’s first decade: who won 116 games in 1906 (and then, oops, lost the World Series to the cross-town White Sox, the “Hitless Wonders”), and took the Championship in 1907 and 1908.

Political journalist and publisher David Rapp may have been based in Washington, DC, for 30 years, but he seems to have left his heart in Chicago:  his knowledge of Second City baseball and the city itself is deep and intensive.  By 1905, he notes, the city’s population exceeded two million, with “an urban culture that was intoxicating and vicious, aspirational and vainglorious, all-embracing and insular.”  And at the same time baseball was truly becoming the “national pastime, a product of colliding and merging local cultures represented, in Chicago, by the most famous members of the team, shortstop Joe Tinker, second baseman Johnny Evers, and first baseman Frank Chance, the ‘Peerless Leader.’” The book’s first chapters sketch their varied backgrounds:  Evers learning “the Irish Game” in Troy, New York; Tinker coming out of a hardscrabble background in Kansas City; and Chance emerging from Fresno, California.  Chicago newspapers ramped up their sports coverage and amped up their civic boosterism, creating a sense of community that celebrated the team as the representative and epitome of the city.

Skeptics have insisted that they were “immortalized” primarily by Franklin P. Adams, a newspaper columnist in New York City (oh, the irony), whose poem “That Double Play Again” famously lamented how the Cubs’ infielders put the Giants out of the 1910 pennant race:  “These are the saddest of possible words: / ‘Tinker to Evers to Chance.’ / Trio of bear cubs, and fleeter than birds, / Tinker and Evers and Chance. / Ruthlessly pricking our gonfalon bubble, / Making a Giant hit into a double-- / Words that are heavy with nothing but trouble: /  ‘Tinker to Evers to Chance.’”  They don’t write ‘em like that anymore.

Whether the trio of bear cubs belong in the Hall of Fame has long been hotly debated, but the skeptics may be right.  Tinker was a lifetime .262 hitter; Evers was not much better, at .270.  Chance at least batted .296, and the “Peerless Leader” also managed the team (in his eight years with the Cubs, the team went 768-389, won four pennants and two World Series).  A look at Baseball-Reference.com reveals that their stats by today’s metrics, such as OPS (on-base percentage plus slugging percentage), aren’t any more remarkable than their traditional measures.

Although Rapp obviously finished his book long before the 2018 season ended, he could have used some recent trends to highlight the differences between those days and these days. Again consulting Baseball-Reference.com: The longest game of the 1908 World Cubs-Tigers World Series lasted two hours and ten minutes; the shortest game of the 2018 World Series ran exactly three hours.  (And we won’t even mention the more than seven hours that went into the 18-inning third game.)  This fall the victorious Red Sox used a total of 10 pitchers in the five-game Series; the Dodgers, 12.  Needless to say, none of them pitched a complete game.  In 1908 the Cubs’ four pitchers had three complete games, including two by the wonderfully-named Orval Overall.  The Tigers used only five. The Red Sox hit eight home runs; the Cubs only one.  The 1908 Cubs hit .293 as a team, garnering 48 hits and striking out only 26 times.  The victorious 2018 Red Sox hit only .222, got 42 hits, and struck out 53 times.  (In this connection, it’s worth noting that the 2018 season was the first ever in which, across the Major Leagues, there were more strikeouts than hits.)  If novelist L. P. Hartley had been a sportswriter, he might have said, “The past is a foreign ballpark.  They play things differently there.”

Rapp doesn’t stress the contrasts between baseball then and now, nor does he settle the Hall of Fame debate.  (Nobody, not even Bill James, will do that.)  But he does something just as good:  by bringing the turn-of-the-century national game and the nation’s urban heartland to life, he tells an engrossing story that will hold the interest of baseball historians and even the most casual baseball fan.