What Should We Make of Bob Woodward’s Book on Trump? 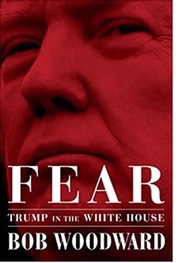 Dear Reader: When some sturdy book like this is finally in my hands, my practice for some time has been, after glancing at the list price, to go to the Index. After rummaging around a bit, I seek out the Bibliographical List or Essay and check out the citations. Then, I read the initial sentence and paragraph, then the concluding several pages.

I’m very likely at this point to read several of whatever passes for a “first review” by others on Google. It’s surprising what turns up. Strange things emerge here. How strange? Very. This time it was a superb essay by one Molly Bell entitled, “Donald Trump and the Politics of Fear,” in the Atlantic for September 2, 2016. My suggestion to alert and interested readers of my review is that at your earliest convenience Check out this first class item! You won’t be sorry.

The present book, Fear: Trump in the White House, is as all know, by a first class journalist, long associated with the Washington Post. He is also found adjacent to Carl Bernstein’s name in accounts of Nixon’s encounter with disaster and removal from D. C.

The book before us devotes itself to the following subjects: Trump, naturally. Then, Immigration; John Kelly; Robert Mueller, Steve Bannon, and two Generals: James Mattis and H. R. McMaster. Also Reince Priebus, countries like North Korea and China. Hillary Clinton not so much, but Gary Cohn is much noted. I was a little surprised by the appearances of Lindsay Graham, but not the frequent mention of Jared Kushner.

I looked up James Comey and read about him a bit; I thought it a bit grudging. I looked up Omarosa and she wasn’t in the Index. Surprise. I studied the words under all the classy color photographs and was duly rewarded. (The rendering of that North Korean madman was a perfect portrayal.) Ivanka is certainly a pistol, at home in our and her environment.

To concentrate on the book as such: I would feel guilty if I did not follow the author’s lead in his very first sentence. It is by way of a tribute! We all get HELP of some kind with our big projects. It is essential and nothing to apologize for. Says Bob right off: “A heartfelt thanks to Evelyn M. Duffy….” She has aided him on five books. On this one, Bob found the challenge “the deep emotions and passions she brings out in supporters and critics.”

What she did is of great interest: “Evelyn immediately grasped that the challenge was to get new information, authenticate it and put it in context while reporting as deeply as possible inside the White House.” She is clearly “an old hand” at backing up experienced authors.

At the outset, this book offers a single quote: It’s Trump saying, “Real power is—I don’t even want to use the word—fear.” The date is March 31, 2016.

Moving on, needless to say as this book goes from unpleasantness to crisis to uncertainty, to bad result, to misconduct, the reader (this one, anyway) is tempted to put it away. Curiosity wins out, however. Let’s get this straight: Here is a visible mole, invited in with “people of affairs,” who knows how to do it, is motivated to continue shaking the bone, is curious for himself as well as the unknown reader, and is usually orderly with his really important narrative.

Yes, this book is important, just as has been said in the marketplace all along. If I were President Trump I would see it as one more obstacle to reelection in 2020. I’m guessing that it could hurt his party (is that the right way to put it?) this Fall, but who knows? Its sale is enormous, as I write, more than 700,000 sold the first couple of days.

I just can’t convey the subject matter of Fear in a review of limited length. Fear’s narrative is 357 pages. There are endnotes. I read them early on. The favorite words of attribution are “deep background interview.” Alternately, “deep background interviews with firsthand sources.” I can tell at once that this is a continent away from prose produced by lifelong research historians like me. There are precious few citations to the books of others. The point is: this book is about NOW, as much as the author can make it be. This senior citizen got something of a kick out of endnotes to “tweets”—of all things. Yet: what else is this pixy president going to have in his so-called archives, hopefully in place soon after 2020.

I’m sorry, but I do want to criticize the use over and over and over of various grammatical versions of fuck. Maybe there’s no way out if famous people use it through every meal, etcetera. Other swear words are included as the text strives to be, well, verbatim. It didn’t improve my opinion of what I was reading—and it sure didn’t improve my opinion of various famous “leaders” of our nation. Usually, it marked loss of control and/or determination to downgrade something (too often something I happen to like), or to degrade somebody.

That there has been a whole lot of preliminary comment about Bob Woodward and his long forthcoming book is evident. I think it unnecessary to go on about his reputation as a chronicler of presidential misconduct, or an outsider finding himself on the inside. He is the writer of books on every recent president who made a key mistake or a stream of them.

Idly viewing TV, I noted “Rachel” would be interviewing this man for an hour tonight. Former Secretary of State John Kerry came on during my afternoon; the subject of the Fear volume arose, and he referred pleasantly to “Bob’s book.” As I left for dinner in my retirement home, I thought, “Oh. I’ll take my book down when eating. I’ll leave the cover on; wonder if any of those old folks will notice the book with its brilliant red cover—or its full rear jacket color picture of President Donald J. Trump. Conclusion: they did recognize it; several turned away; others limited themselves to: “Oh, you got it!”

Let’s get something straight: It was a pleasure to review the James Comey book; as I said, he seemed a good character example for youth and his book was a worthwhile read for youngsters who might be up to it. I think the bad language and consistently bad conduct highlighted in Fear disqualifying. Not a book for kids.

There just have to be some authentic quotations here from that President Trump—the man sleeping in our White House and using the Oval Office as totally His. Let’s start: Re the Press: “They’re kicking the crap out of me.” 356 “Hope Hicks and Kelly—overrule me every time I want to pull someone’s credentials.” 356 (I’ll avoid my quoting his remarks about his Attorney General. Sessions has been Trump’s nemesis from almost first to last.)

Said an important aide: “We need to have a process to make sure that we do this in proper order, that we’ve thought through all these things.” To which our elected leader’s response was, “I don’t care about any of this stuff. I want it on my desk on Friday.” (The subject was whether or if to withdraw from NAFTA.) 156

Over and over Bob Woodward chooses (or has to choose) to quote the President of the United States in a manner that lowers him in one’s estimation still further. On page 56 banker Gary Cohn is speaking of interest rates going up in the foreseeable future. Says Trump: “I agree. We should just go borrow a lot of money right now, hold it, and then sell it and make money.” Says the book; “Cohn was astounded at Trump’s lack of basic understanding. A few more words. Then, Trump as learned economist: “Just run the presses—print money.”

When I was reviewing the Omarosa book Unhinged, I quoted the word “paranoia.” Here it turns up again. Rob Porter says, rather early, “Trump’s behavior was now in the paranoid territory.” 166 Reminder: This man has a lot to say and do about war and peace!

I just don’t have the heart to quote the President on his many casual observations that are so caustic about countries long friends of the United States. It’s bad enough that he defames our allies casually, almost at a “what’s the difference?” level. He got the idea in his head that our troops should be withdrawn from South Korea at once, for example. Corrective action had to be taken by responsible military leaders at once.

I don’t see any useful purpose being served by trying to summarize a lot of what’s in the book. Many subjects are being summarized, beginning every, say, three or four pages, in the media. I don’t see information being well served by my re-summarizing over and over. Those entranced with the Flynn matter, the Comey matter, the staggering turnover in high employees since the Inauguration, can read all about it.

We have to face Trump’s weird tweeting to begin each day, or the oddity of his family members barging in as though not at all related to “the boss.” As I say, those entranced with all the sideshow of Trump in Action, should read much of the Woodward book—maybe at the library.

To me, Woodward has opened up the next stage beyond Rachel Maddow, and other hard-working TV news interpreters. He has done—in my scholarly view, at least—a solid and sound job of revealing things that need opening up yet again to daylight.

Clearly, we are all in a whale of a mess, aren’t we? Our incumbent didn’t have to be elected, did he? But he was. Now there seem to be alternatives: A. We somehow can educate him on facts and appropriate conduct. B. We can somehow get rid of a lot of highly placed officeholders close to him, and bring in qualified leadership for lots of jobs. And/Or C. We can figure out how to work the machinery designed long ago to eliminate any dangerous or incompetent President from office.

Using one or more of these alternatives just might save us from ruining ourselves and other well-meaning, self-governing allied nations.

It is now a time to be SERIOUS, stop equivocating, and evading, and postponing, and, yes, hoping for a miracle. At your reviewer’s advanced age (over 100), I feel like insisting, no, demanding, that the Congress and our electorate do their duty. The future needs a warrantee, a guarantee: Do What’s Right!