Vaughn Davis Bornet’s Ph.D. is from Stanford University (1951), the B.A. and M.A. (1939, 1940) are from Emory University, the year 1941 was at University of Georgia. Author of over a dozen books and scores of articles and essays, he has been writing articles frequently in recent years on the internet’s History News Network. He holds “Distinguished” awards from American Heart Association and Freedoms Foundation. He taught at University of Miami, 1946-48, and Southern Oregon College, 1963-80. He was a staff member at The RAND Corporation in the 1960s. A Commander in the Naval Reserves, his active duty was 1941 to 1946. His 2016 books Lovers in Wartime, 1944 to 1945and another, Happy Travel Diaries, 1925 to 1933 (both Amazon) are recent.  His latest is Seeking New Knowledge: A Research Historian’s Rewarding Career (Bornet Books). He lives, apparently only semi-retired, in Ashland, Oregon. 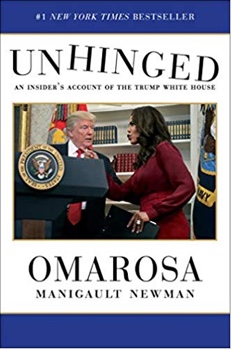 The provocative quotation following appears, alone, by itself, on the back jacket for everybody to read. You might as well: “He rambled. He spoke gibberish. He contradicted himself from one sentence to the next…. While watching that interview, I realized that something real and serious was going on in Donald’s brain. His mental decline could not be denied. Many didn’t notice it as keenly as I did because I knew him way back when. They thought Trump was being Trump, off the cuff. But I knew something wasn’t right.”

There’s an awful lot to quote in this book. The author is clearly a talented African-American woman and we are always aware of it. She is seldom relaxed, it seems; on the other hand, despite mood swings, she is capable of great joy now and then. We are reminded that two of her family members were shot dead early on; and she worries—and has cause, as mobs misbehave here and there in her pages – but not quite cover to cover.

The author is a beautiful woman of good posture, a veteran of “The Apprentice” for years, seldom unemployed if she wishes to have a job between various intermissions. After being fired by the White House in chapter one, UNBELIEVABLY, in a day or two she is offered a huge salary by a Trump daughter to work on the 2020 campaign. For that day and time, at least, she says “no.”

Subtitle, “An Insider’s Account of the Trump White House,” but she is all over the place on content as we turn the pages: California, Ohio, Florida, NYC, downtown D. C.

The start is dramatic: she’s abruptly FIRED, and not the way we might be. For Omarosa, it was off to the Situation Room with that Kelly soldier where there were threats, loudness, recrimination, replies, locked doors, hints of violence. After that beginning, we have no doubt that this experienced lady is important and her memory feared.

My book is marked up with big circles and “quote,” check marks, and “discuss.” This is a somewhat dramatic narrative, one to be taken seriously. One wishes the writer well, but there seems an aura of strain throughout, I thought.

This White House staff member, Omarosa, expected her life to improve Donald J. Trump’s standing on this planet. She comes to hate him at the end, and she worries about the destiny of our good nation with him still in control. Let’s listen to her misgivings:

“… I knew without Keith [Shiller], the president would probably become unhinged.” (Page 303) Again, “…Due to his lack of empathy and his narcissism…” And, “…I realized that something real and serious was going on in Donald’s brain. His mental decline could not be denied. Many in the White House didn’t notice it as keenly as I did because I knew him way back when.… I knew something wasn’t right.” What might be done? She came up with: “Declare a state of medical emergency?” (Page 246)

This was startling: “During one of my visits he asked, “Hey, Omarosa, what do you think about Comey? I had to let him go, right? He couldn’t be trusted; he was not loyal.” She judges, “No one—and I mean not a single person, agreed with his decision.” (Page 244)

Do read about Trump and his awareness of guns on pages 240-41. She doesn’t think much of White House doctors (nor do I, from my LBJ book research). (Page 242) That medical personnel, she says, gave out pills to anybody. “All we had to do was ask.”

From reading newspapers, we believe our leader disregards Briefings. Here, we read: “In our briefings, Trump’s attention was scattered. He was distracted, irritable, and short. Normally, when DJT got into one of these moods, you knew to give him time and space. But in this case I could not.” (Page 217)

Is his mind sharp and clear? She is sure about his mental deterioration and writes clearly about both that and “his racism.” (Pages 292-93) At one point, this reviewer came to think: NO. Don’t be quoting this to our public! He’s the President of the United States. Limit those quotations.

We never forget this book is by a black woman. It’s clear: “… white men who surrounded me….” “A white participant is given the benefit of the doubt; a black woman in the workplace never is, regardless of the circumstances.” (Page 265) This book is about something called “the cult of Trumpworld.” One word.

Here is one message conveyed: “I was miserable at the White House. Morale was at an all-time low, and the environment was toxic. I realized that Donald Trump was the biggest distraction to his own presidency. Donald Trump, the individual, the person, because of who he is and what he stands for and how he operates, would always be the biggest hindrance for us. Donald Trump, who would attack civil rights icons and professional athletes, who would go after grieving black widows, who would say there were good people on both sides, who endorsed an accused child molester; Donald Trump, and his decisions and his behavior, was harming the country. I could no longer be a part of this madness.” (Pages 318-19)

How, you may ask, does a “typical historian-reviewer” feel on emerging from this candid, observant, critical, worrisome, concerned, notable book? As it happens, I have written about race and presidents. About Trump I am in despair. I have come close to despising our incumbent President, while hoping for the best. (That would be dumping Trump by the wayside at the very soonest.)

On the other hand, Donald has been for years, after being handed immense startup money, unquestionably an entrepreneur, creator of useful hotels and golf courses, and a jovial entertainer of huge audiences. If I enjoyed all or any of those “Miss Bosom” programs he provided on TV, I really should thank him.

Still and all, I’m frightened by what I read in this book about DJT’s CASUAL, UNINFORMED, and IGNORANT “presidency.” Omarosa’s book , sure didn’t help my sense of well-being. As I read along, I felt, well, awful.Examples of an unfit, almost uncaring, certainly inadequate, President kept showing up, over and over. I didn’t like the really staggering contrast with earlier subjects of my books – Herbert Hoover, FDR and LBJ – surrounded as they were in office by brilliant, dedicated public servants who seldom resigned, listened obediently and unfailingly to briefings with consequences,, and spoke rationally and regularly to the man who chose them. Yes, they campaigned while in office, more or less, but they G O V E R N E D and mostly set aside their earlier occupations while in our employ.

Here we have a bright woman of 44 years. She filled a job called (unbelievably) Assistant to the President and Director of Communications for the Office of Public Liaison, all in Trump’s White House. (Earlier, she served in Clinton’s White House!) Back when, she strove beyond the MA at Howard University; was a military Reservist chaplain (sic), and is apparently an occasional minister with her active minister 2nd husband in Jacksonville, that is, when “between political jobs.”

She handles much work with one hand behind her. Her favorite activity, it seems, is striving to change the political mindset of a giant mass of black voters out there, changing it to firm support of her current politician whoever it is, and doing that, whatever the cost or time-demand. One never-ending goal has been to advance her own personal popularity and reputation because it will surely help Donald J. Trump! Maintaining or enlarging his probable vote-count in the coming election was, for a time, her hope.

Candidate Trump after the end of the 2016 campaign was disturbing to Omarosa. “It was very concerning to listen to him go on and on about the election in private. He would get all worked up and get crazed about the ‘fake news’ reports. I was worried that in his first week [in the White House] he was already cracking under the pressure.” (Page 210)

Our book author casually mentions those 4,000 White House jobs to be filled way back when. It’s scary. Members of the staff were to “back up whatever the President said or tweeted, regardless of its accuracy.” (Page 211) What level of employee would allow that? On page 228 she almost casually speaks of “paranoia” setting in. Wow. Later, she wonders as to a tweet, “Does he even realize he sent it?” Italics hers.

Omarosa ruminates happily, after Trump’s victory speech, “That moment was one of the highlights of my life.” It had proved “how wonderful and great this country had been to me.” She was living the American dream, she proclaims. Those days for her long ago being on public assistance were over! You bet! Back after the inauguration, the most powerful man on the planet was next to her, and she deeply reflects as to that: it was “the two of us on that stage together!”

It was many months –almost a year—before the room nicknamed the “WH Osama bin Laden death planning room” would be used to house a General employing it to FIRE an employee far below Cabinet level. It was December 12, 2017 when our Omarosa would be escorted there, threatened, with the door locked against her in that scary basement, maybe facing the spectacular glare of a square foot of long ago awarded gold braid on the chest of her nasty critic. She has been blurting: “I’m being railroaded!”

It all made me think of President Andrew Johnson’s turbulent administration, back when the Senate failed to convict by only one vote, despite impeachment by the House. Maybe I’ll read up on all that—to Be Prepared! This time, maybe seriously consider finishing what we start!