Review of John B. Boles’s “Jefferson: Architect of American Liberty” 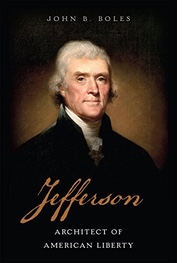 In Jefferson: Architect of American Liberty, John Boles offers us another biography of Thomas Jefferson. In his brief introduction, he mentions that his aim is to present Jefferson as “politician, party leader, executive; architect, musician, oenophile, gourmand, traveler; inventor, historian, political theorist; land owner, farmer, slaveholder; and son, father, grandfather.” He cautions readers that his portrait is “admittedly sympathetic but critical when appropriate.” (The choice of “sympathetic” is unfortunate, as it suggests a penchant for looking for positives and ignoring negatives, though that is not what Boles does.) Boles aims neither to deify nor demonize, but to “humanize and contextualize Jefferson.” The modus agenda is not to cut Jefferson “down to size,” by showing how certain of his thoughts have not stood the test of moral time, but to get at the historical Jefferson. There is no political agenda, and that is how history ought to be written.

The book, over 500 pages in length, comprises 31 chapters as well as a postscript and certain addenda—e.g., a brief bibliographical essay at book’s end. Boles proceeds not thematically, but chronologically—an approach which decuples the difficulty of writing a readable biography of Jefferson, given Jefferson’s numerous interests and entanglements in them. Still, by book’s end, readers will find that Boles succeeds in his sympathetic and sometimes critical depiction of Jefferson, as the “most quintessential American Founder of them all.”

The prose throughout is fluid and engaging, and enjoyable. Moreover, though Boles’s task is a “full-scale biography,” we are throughout introduced to Jefferson in chunks, as the chapters, usually between 15 and 20 pages, are not overwhelmingly large. That allows readers to savor the dimensionality and depth of Jefferson as well as mull over certain of his failings.

One of the shortcomings of the book is its motivation. Why are we introduced to another biography on Jefferson? What has Boles to say that others before him have not said?

Yet one of the merits of the book are certain insights, Boles offers, sprinkled throughout the book that function as correctives to misstatements or incautious claims in other biographies.

For instance, Boles mentions that we cannot make much of Jefferson’s terseness apropos of his mother’s death, as numerous others have done, when Jefferson writes, “My mother died about 8. oclock this morning in the 57th year of her life.” Jefferson was equally terse when Dabney Carr died and when his daughter Maria died, so we cannot assume a strained relationship between the two.

Moreover, Boles makes an especial effort to show, not bypass as do others, the degree of Jefferson’s political involvement in his years of governmental service. He mentions, for instance, Jefferson, as a delegate to the Continental Congress in 1776, had served on “an astounding thirty-four committees,” while still a fledgling politician. Boles writes clearly of Jefferson’s successes in his first term as president and failures in his second term. He makes the aidful point that the magnitude of certain successes—e.g., the Louisiana Purchase—inevasibly led to subsequent failures—e.g., the Embargo Act. Both were a result of the complexity of the relationships between France, England, Spain, and the United States in those frictional years.

Boles also clears up the confusion of the Taddeus Kosciuszko affair. Kosciuszko, a friend of Jefferson, allotted his American assets to be given to Jefferson to purchase “Negroes from among his own or any others” and give then liberty. Boles shows that Kosciuszko had written three wills, not one, and Jefferson, at 74 years of age and not having practiced law in 43 years, did not wish to embroil himself in “an extraordinarily complicated legal mess.” Most authors merely cite Jefferson’s unwillingness to act as more evidence of his racism.

Boles’s account of Jefferson’s view of Blacks and slavery is especially good. Not prey to the fallacy of historical anachronism (presentism), Boles is intent on situating Jefferson. Jefferson’s belief in many of the inferiorities of Blacks in his Notes on Virginia, notes Boles, was a “summarizing [of] commonplace late-eighteenth-century French and European scientific conjecture” (see my HNN piece, “Was Jefferson a ‘Scientific Racist’?”). Again, Jefferson’s relatively gentle treatment of his slaves is contrasted with “the violent nature of white society at the time,” where it was acceptable to whip schoolboys, wives, servants, and soldiers and sailors. Jefferson’s view that emancipation could not be done successfully without colonization is not given as an instance of hatred of Blacks. Boles notes that the view was deemed reasonable by many others at the time—James Madison, John Marshall, and Henry Clay—and Abraham Lincoln years later. Boles also indicates that Jefferson’s not doing more to eradicate slavery later in life was likely due to a willingness not to force the issue, but let it move in tardigrade fashion, as Jefferson was always chiefly concerned that precipitous action would result in a break of the union, which would have made insignificant the Revolutionary War and would have made a shambles of the experiment in republican governing, which for Jefferson allowed for a strong union over a vast expanse of land in spite of parochial differences.

One of the weaknesses of the book is uncritical acceptance of the Sally Hemings’s story, from the account of Sally’s mother, Betty, being the concubine of Jefferson’s wife’s father, John Wayles, to Jefferson’s involvement with Hemings. Boles connects with the pro-paternity literature—Brodie, Gordon-Reed, and Burstein—but overpasses the anti-paternity literature—Burton, Turner, and Hyland—and that mars his book. A greater focus on the evidence behind the claims instead of the avowed historical consensus would have been preferable. The issue needs to be settled not by a show of scholarly hands, but by evidence, and there is a critical lack of evidence to decide the issue either way.

I close by returning to the problem of motivation. Boles never tells us why we has written the book. What does he have to say that others have not said? The secondary title, Architect of American Liberty, misleadingly suggests to readers that Boles will begin by introducing them to Jefferson the architect, and then show how what drove him to an interest in architecture drove him to his other interests and to his fixation on liberty. Boles does not take that route, and so the secondary title remains a mystery.

Overall, readers, looking for a new or fresh depiction of Jefferson, will be disappointed. Readers, unfamiliar with Jefferson and looking for an enjoyable one-volume history of him, will not.